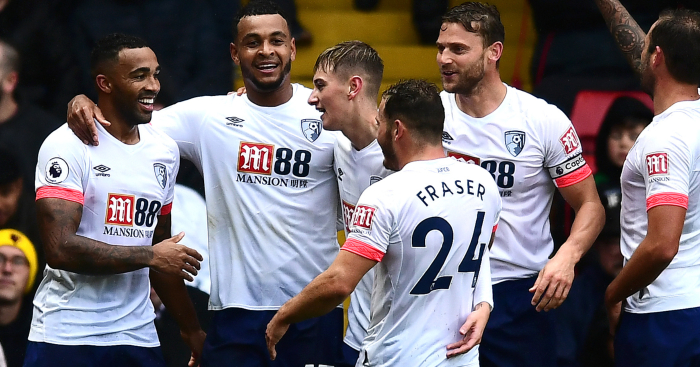 “Our front three are as good as anyone in the league… they are up there with Liverpool’s front three when they are on form.”

Many assumed Asmir Begovic was euphoric when he compared Ryan Fraser, Josh King and Callum Wilson to one of the most frightening trios in the game: Sadio Mane, Roberto Firmino and Mo Salah. The Bournemouth keeper was speaking after Fraser had led the charge against a Leicester defence featuring Harry Maguire, title-winner Wes Morgan, Portugal international Ricardo Pereira, and England debutant Ben Chilwell but Begovic’s testimony was based on more conclusive evidence than just a single afternoon against a Foxes rearguard having an off-day.

Eddie Howe’s forward line offered further proof of their credentials at Vicarage Road, where Watford were torn apart on their own patch, with the Cherries unceremoniously unseating Javi Gracia’s high-fliers from their fifth-placed perch in the Premier League with a 4-0 thrashing.

Bournemouth’s haul made them the league’s second-highest scorers, with only Manchester City having netted more goals this season. Howe’s side have scored 16 times, with 10 being shared across the front three. King’s brace against the 10-man Hornets took his tally to four, while Wilson grabbed his third of the season after King and David Brooks had killed off the hosts before half-time.

Not only are Howe’s hit-men helping themselves, they’re each doing more than their fair share creatively. Wilson laid on half of their haul against the Hornets while Fraser and King offered another assist each. No one in the Premier League has created more goals than Wilson, while Fraser is only one assist behind his team-mate.

Fraser’s form has perhaps caught the eye most during Bournemouth’s superb start and the Premier League’s smallest player is making good on his promise made at the beginning of the season. “It is going to be a different me this season,” said the Scot. “I don’t want to be a bit-part player. I want to be the game-changer who takes it by the scruff of the neck.”

Given only Gylfi Sigurdsson has created more chances in the league this term, you would have to say Fraser is sticking to his word. The Scotland winger offers far more than just a devilish set-piece delivery. Only Salah and David Silva have created more opportunities from open play, while Fraser has created three more big chances than any other player.

Wilson and Watford’s Jose Holebas are the two players closest to Fraser for making the big chances and Begovic also reckoned that the Cherries striker, who has fought back from two serious knee injuries, deserves England recognition.

Wilson discussed in the summer his desire to add to his solitary Under-21s appearance, which came as a substitute for Harry Kane in 2014. Both forwards have enjoyed and endured vastly different fortunes since, but the Bournemouth forward remains ambitious: “It would be nice to represent my country but I think that is going to come from having a good pre-season, having a good start to the season, and focusing on Bournemouth.” So far, so good.

King is already an established international with 12 goals in 35 appearances for Norway. The 26-year-old has a desire to play in the Champions League one day, and Spurs, who have been repeatedly linked with the former Man Utd youngster, could have done with his current level of output in recent weeks.

King, Wilson and Fraser’s pursuit of their individual ambitions as well the team’s is making for the most potent trio of the season so far. Maybe Begovic’s claim wasn’t so barmy after all.