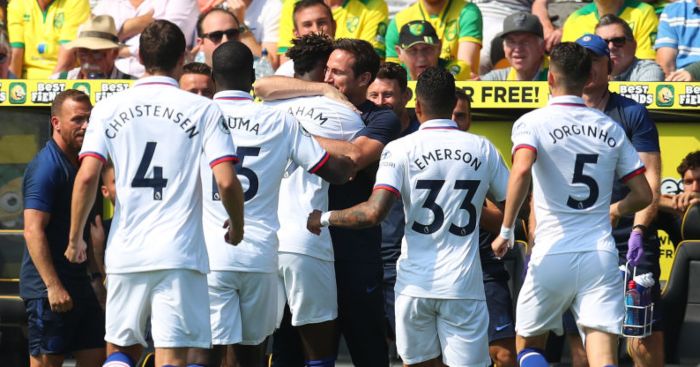 It tends to take longer than three minutes into a manager’s third game – and more than 51 days into a proposed three-year tenure – for such a pointed show of unity.

The sort of scenes that followed Chelsea’s opener against Norwich on Saturday are often in response to a long run of poor results and the subsequent raft of media criticism and pressure. It looks choreographed but it is instinctive, emotional. It is an assertion, a declaration, proof that actions speak louder than words. Why tell the assorted press that all is well, that this is a team working towards one common cause, when you can show them?

But this was different. It was visceral, an outpouring of relief. This is Frank Lampard at the start of his Chelsea journey rather than the end, and a set of players determined to show they are more than happy to follow him.

When Tammy Abraham converted Cesar Azpilicueta’s cross at Carrow Road, he sprinted over to his manager. It has been a tough month for the striker, his first steps in the colour of his boyhood club coming with a bittersweet tinge. And Lampard has been a pillar of support in the midst of despicable racist abuse.

But it was an example, as much as anything, of his undoubted respect for a man who grew up idolising. That his teammates duly joined him speaks volumes about just how eager Chelsea are to make this appointment, this era, a success.

This club have not always pulled in the same direction. Managers have fallen victim to players and vice versa. Fans have vocalised their dissatisfaction, both justified and otherwise. The owner has ranged from interfering to seemingly ambivalent.

But the authors of this latest Chelsea chapter are finally on the same page. Lampard is a popular leader with supporters and squad, a cheap injection of nostalgia and promise in a period of uncertainty and pessimism. For a time, ‘palpable discord’ became their motto.

Perhaps there was an overreaction to his first two Premier League games, a swing too far one way in an attempt to correct the balance. Some sections of the media have strived to absolve Lampard of blame completely for the 4-0 defeat to Manchester United and limp draw with Leicester. The manager himself will know it ought to be apportioned equally between him and his players.

But this was a necessary, if nervous, step in the right direction. Chelsea shot themselves in the foot twice against Norwich and still stumbled across the line first.

Defending remains the sort of weakness that cannot be allowed to fester. Abraham and Azpilicueta combined for the first goal but were two of many guilty parties as Todd Cantwell was allowed to equalise within 156 seconds.

Mason Mount’s strike was as sublime as Christian Pulisic’s deft, clever assist, yet Andreas Christensen and Kurt Zouma were then cut through like butter by the hottest knife in the Premier League as Teemu Pukki restored parity.

By the time Abraham scored his second, the eventual winner, the moment for statements had passed. He sought not the arms of his manager but the embrace of solitude, basking in his own personal glow. He and Chelsea had already made their point; this was just the confirmation that they had earned all three.

Lampard could emulate his playing career in the Stamford Bridge dugout with a legendary spell in charge. He might prove to be little more than a stopgap, a means to a transfer-less end. He may not even see out three years. Time will tell and definitive conclusions at this stage are futile. But for now, at the very least, the Chelsea smile is back.