Home All The News F365’s early winner: Chelsea and a serene start for Sarri 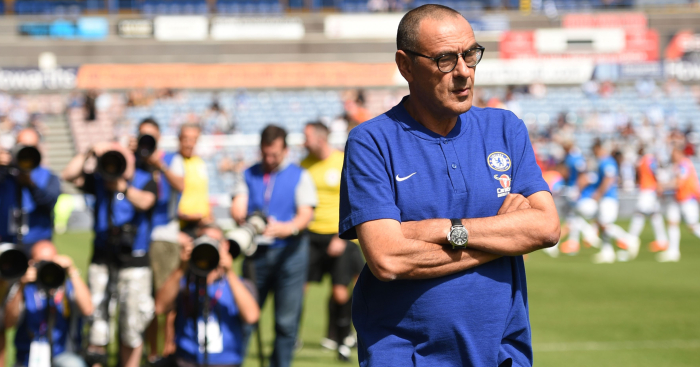 Maurizio Sarri was getting his excuses in before his first trip to Huddersfield, but no mitigation was required in West Yorkshire, where the Premier League saw the first shoots of Sarri-ball.

The Italian’s pessimism is permissible in these circumstances. Sarri’s appointment was too late and the start of the season too soon for him to implement the changes that need to be made before the Blues become the image of their new manager.

There were some encouraging signs at Wembley last week, despite the FA Cup winners suffering defeat in the Community Shield. In three weeks, Sarri had managed to cobble together a passable Man City tribute act from the collection of largely stand-in performers at his disposal but six days on, the Blues in yellow had a much more convincing look about them just from the inclusion of Willian and World Cup winner N’Golo Kante.

Eden Hazard was kept in reserve just in case he had to be dispatched from the bench but by the time the Belgian was sent out to stretch his legs, the game was won.  Kante’s first goal for a year and Jorginho’s spot kick gave Sarri’s side a two-goal lead and renewed belief after the break that led to glimpses of the kind of swagger that the new manager did not expect just yet.

Given Jorginho’s importance to Sarri’s plan, presumably the manager expected the Italy midfielder to grow into the season in line with the expectations of the team as a whole. The only thing Jorginho is taking his sweet time over is his penalty duty.

After a bright showing at Wembley against the champions who craved his signature this summer, once he had settled into the opening half-hour, Jorginho was again at the heart of everything Chelsea offered, getting on the ball everywhere between the boxes, though the only touch he managed inside either was his most memorable – the penalty. Dovetailing with Kante to his right, you would expect to see Sarri allow both of his workhorses plenty of freedom to get forward and further license to improve their attacking output.

Every one of Sarri’s back four had more touches and attempted more passes while Huddersfield refused to press high but no one in yellow matched Jorginho’s 93.9 per cent passing accuracy despite more chaos around him. There has been a noticeable improvement in Chelsea’s play already under Sarri. Against City, they completed 87 per cent of their passes and it took City until the 74th minute to match Chelsea’s volume. At the John Smith’s Stadium, they improved to 88 per cent. Only once last season did they achieve a better rate of accuracy then they managed last week and again on Saturday.

The venue for last season’s passing clinic presented by Antonio Conte’s Chelsea? Huddersfield. Perhaps the Terriers are more reluctant to chase the ball than many other opponents but that should not temper Sarri’s satisfaction with his new players.

The newest on display today was Chelsea’s No.1. It was the kind of debut Sarri will have wished for from Kepa Arrizabalaga, who was gently bedded in behind the back four. The main concern over a new foreign goalkeeper coming into English football, especially one as young as Kepa, concerns his domination of his box but Huddersfield lacked the quality to test that trait. Only Fulham so far on opening weekend attempted more crosses in open play but the Terriers’ accuracy was sadly lacking. Kepa had a single save to make as he enjoyed a debut during which his passing was the Spaniard’s most evident quality.

The sight of a hungry Hazard in the final 15 minutes was another bonus for Sarri. The Chelsea boss was insistent on Friday that the Belgium star would not be leaving for Real Madrid this month but he will still have felt reassured that Hazard is not intent on sulking. His mental state appears healthy and so too does his physical shape if the dribble which set up Pedro’s late goal is any proof.

The promotion of Hazard into the starting line-up against Arsenal next week will likely remedy another of the problems Sarri identified: the change of pace in his attack. The Gunners will offer a much sterner test than the Terriers and clearly it will take time before Sarri’s men can legitimately take on Pep Guardiola’s champions at their own game. But on Saturday’s evidence, perhaps the new manager can afford to think more positively in the short term.