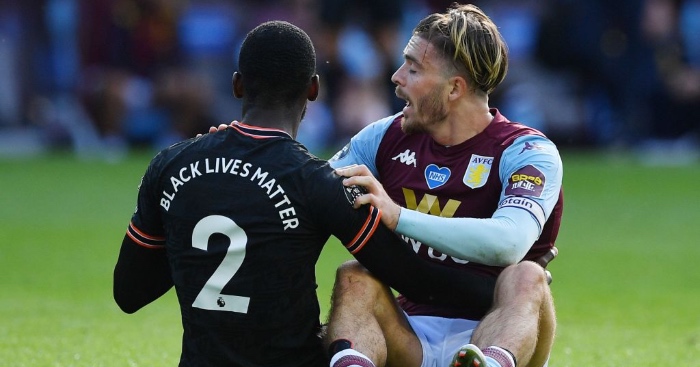 The Chelsea plan was clear. Switch the play quickly, get overloads on the flanks and fill the box with as many bodies as possible. But final balls were played ‘into an area’ rather than picking out specific teammates, chances – if you can call them that – weren’t finished off, and the defending at the other end was deeply concerning. It was a very typical Chelsea display against relegation-threatened opposition. Thank f*** for the captain.

Cesar Azpilicueta remains Chelsea’s best defender, and was on Sunday also their most creative player, providing the assists for both Blues goals – the first a delightful cross for Christian Pulisic to poke in at the back post, the second a clever pass across the box to Olivier Giroud, who scored via a deflection – as they came from behind to win at Villa Park.

But it looked for a while like that we might see that Frank Lampard post-match interview. The one where he bemoans the many missed chances instead of the poor direction of the crosses, and blames a lack of concentration for conceding, rather than just not having very good defenders. A win means we won’t see that, but the same problems were apparent.

Chelsea got themselves into a number of good positions in the first half, but passed balls into an area rather than picking players out – easily the biggest frustration with Willian’s game. For someone with so much ability, he sure plays a lot of hit and hope crosses. That lack of care in delivery that has urged Lampard to sign Hakim Ziyech, who picks people out almost every time.

And Lampard could have done with his other new recruit on the pitch in that first half. On at least two occasions, Olivier Giroud was through on goal, with no defender within 10 yards of him. But before you could say ‘Timo Werner’, the gap was closed to nothing, and the ball was laid off. The qualities Giroud provides were on show as always – the deft touches and hold-up play – but the limitations clearly outweigh the benefits.

Both Ziyech and Werner then, signed with the ongoing problems at Chelsea in mind – smart business. So why on earth are they not trying to buy a centre-back?

Even though Chelsea had 90% possession in the ten minutes leading up to Kortney Hause’s opener, it still somehow felt like it was coming. The home side had possession in the final third on three occasions. On the first, Anwar El Ghazi forced a decent save from Kepa Arrizabalaga as he shot from 25 yards under no pressure. Then John McGinn got in front of Antonio Rudiger far too easily and should have done better as he got on the end of an El Ghazi cross.

And finally, just before half-time, Hause opened the scoring. It was a very inviting ball from Douglas Luiz, and the Chelsea defence could perhaps be forgiven for ceding Hause’s first attempt as the ball dropped in that nightmare corridor between back four and goalkeeper. But after his initial parried effort, Hause had time to fall over, get back up again and place the second ball into the back of the net with no Chelsea player anywhere near him. This was in the six-yard box. For that, there can be no absolution.

And Kepa – who faces a nine-game audition for his future – was doing his typical don’t look at me trick, where it’s difficult to blame him entirely, but a bolder goalkeeper would have taken charge of the situation. It wasn’t a mistake, but it was a chance to show his authority. A chance missed.

Villa had other opportunities after that, in fact had half-chances almost every time they went forward – a Rudiger miskick here, an Andreas Christensen stumble there. A more potent attacking force would have torn them apart.

It’s not like Chelsea can blame N’Golo Kante’s position for their fallibility either, the World Cup winner was back in his favoured defensive midfield role, and had a decent game. The centre-backs simply aren’t good enough. All four of them – Cristensen, Rudiger, Fikayo Tomori and Kurt Zouma – are a six out ten, Rudiger a seven, at a push. But none of them come anywhere close to the quality of Virgil van Dijk or Aymeric Laporte.

If Chelsea are seriously wanting to contend for trophies, and it certainly looks like they are given the signings they’ve made and are rumoured to be close to completing, they have got to add a centre-back or two to that wish list. Because the signings they’ve made so far make total sense – improving them in areas they clearly need improvement. To ignore the the area that needs improving most would be a very strange decision.

But a win’s a win, and a vital one at that. They are now a healthy five points above Manchester United, but with Manchester City, Leicester, Liverpool and Wolves still to play, that may just have been a must-win game in the race for Champions League football.