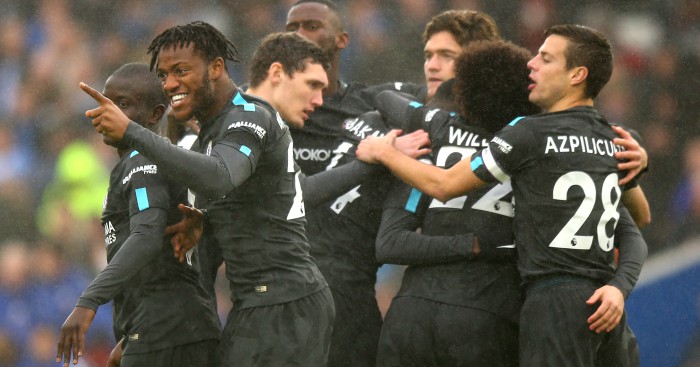 “He is Chelsea’s player and he is in our squad,” said Antonio Conte ahead of Chelsea’s FA Cup third round replay against Norwich City. If that was hardly the most emphatic vote of confidence from the manager in Michy Batshuayi, worse was to come.

“I think this is the truth until now. He is a Chelsea player and is having the possibility to show that he can play for Chelsea. This is the reality, in the future I don’t know what will happen.”

In the future, we are told, Conte will allow Batshuayi to leave Chelsea as long as he can find a target man to replace him. Edin Dzeko was the most inspiring name mentioned, Andy Carroll and Peter Crouch the more bizarre. Chelsea’s plan would seem to be buying a worse version of their Plan A rather than a Plan B.

Batshuayi was rotten in the original Norwich tie, but he can hardly be blamed for rustiness having been left out in the rain for most of the last 18 months. Before the trip to Brighton, the Belgian had played fewer than 500 minutes in his Premier League career. It would be more surprising if Batshuayi wasn’t struggling to find his feet on these irregular visits to the pitch.

Batshuayi should certainly not have been starting at the Amex Stadium; that was never the plan. But after Alvaro Morata’s sending-off in midweek, Conte played barman and poured his striker a stiff one in the last-chance saloon. Batshuayi promptly downed his drink, got a round of shots in for the lads and danced until dawn. Suddenly, Chelsea were rampant again.

Brighton played a significant role in their own downfall. Chris Hughton’s team have now won one of their last 13 league games, and have scored four times in their last 12. New signing Jurgen Locadia was unveiled before the game and has broken Brighton’s record transfer fee, but will not play until next month due to injury. They are in need of another good news story to halt the slide.

Hughton will also be keen to point out that his team had chances to score at least once. Willy Caballero has a penchant for saving penalties – demonstrated again in midweek – and the goalkeeper did his best to give himself another opportunity by tripping Ezequiel Schelotto. Caballero’s punching added an ‘It’s A Knockout’ air to proceedings that made the match highly watchable, although he also made two wonderful saves.

Still, it would be uncharitable – and a little joyless – to focus on the negatives for long. Not when Chelsea’s new-look front three danced and drifted to such mesmeric effect. Their second goal was a supreme team move between Batshuayi, Eden Hazard and Willian, containing the one-touch flicks and lay-offs that come off in training but so rarely come together in competitive matches. It was reminiscent of Jack Wilshere’s goal of the season against Norwich City in October 2013, but with a more emphatic finish. The three protagonists’ faces displayed their surprise at their own magnificence.

The question is obvious: is a Chelsea team containing Morata capable of such football? For all his fine hold-up play and superb heading ability, Morata is happier when receiving the ball, taking a second or two and then bringing a team-mate into play. His forte is not the fleet-footed flicks and flitters that Chelsea excelled at on Saturday.

After weeks of stupefaction, Chelsea produced more entertainment in 90 minutes than in their previous four matches combined. Conte may insist that the absence of Morata was a matter of mere coincidence, but the reality may differ. Far less significant than Batshuayi playing well is that Chelsea’s other attackers thrived in his presence. Stick with this plan against Arsenal on Wednesday?