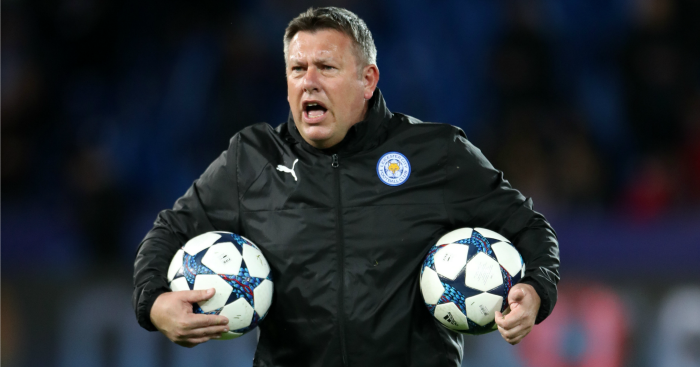 That’s the thing about the dearth in quality English coaches and managers: it’s very easy to jump up the queue. A month ago, Craig Shakespeare was an assistant manager whose only previous managerial experience was as a one-game caretaker at West Brom in 2006, sandwiched between previous caretaker Nigel Pearson and Tony Mowbray’s arrival.

Fast-forward several eventful weeks and Shakespeare’s career has been fast-forwarded at least five years. He will become only the third Englishman to manage a side in the Champions League quarter-finals since its re-brand, following Bobby Robson and Harry Redknapp, and is the third highest-ranked English manager in the country by league position. His entire managerial career consists of four matches, but crucially four wins.

Nobody reasonable is yet heralding Shakespeare as a saviour of his industry – most of us haven’t got beyond the laboured puns yet – but nor too should we dismiss the achievements of a coach who has made subtle changes in team selection and engendered a massive shift in mood at the King Power stadium. Supporters and players waking up on Wednesday will not need to beware the Ides of March (see, I told you); Leicester are taking everything in their stride again.

There is, of course, plenty to be said for simply not being the last guy. For all the grief and outrage over Claudio Ranieri’s sacking (detailed by Sarah Winterburn in her post-match piece), two sets of people broadly considered it the right call: Leicester City’s players and supporters. That does not mean slamming the door in Ranieri’s face or ‘disrespecting’ him, merely making a bold move for the good of the short-term future. The truth is that what Ranieri had been doing wasn’t working, and what he tried to do to fix it only made the problems worse.

To repeat, Shakespeare has not simply rolled the same dice and hoped for better fortune, even if the new manager was modest enough to put the improvement down to mere coincidence. The indefatigable Shinji Okazaki has started all three games having been frozen out somewhat under Ranieri, with Marc Albrighton also now a permanent fixture again. Jamie Vardy has spoken about Shakespeare tweaking his role to play higher up the pitch and drop deep less often, and that is working too.

The most interesting information came from Christian Fuchs before the Sevilla game. “He was always the person to go to for the players and the players are trusting him,” Fuchs said. If the Austrian did not mean that statement to be pointed, it is certainly how it comes across.

This was Leicester’s night, but it was also Shakespeare’s. Over-promoted following his colleague’s sacking, the supporting actor could easily have got stage fright when stepping into the breach, but has shown plenty enough that he may now be considered as a manager on a permanent basis, if not yet permanent manager at Leicester.

If the victory over Liverpool could be put down to a response to Ranieri’s sacking and the victory over Hull to the media criticism of the players, beating Sevilla was different. Shakespeare having his tenure extended could so easily have caused a subconscious sigh of relief and subsequent complacency, but it had the opposite, galvanising effect. Their opponents, who sit five points clear of Atletico Madrid in La Liga, were made to look ordinary.

Calling this the greatest sporting story is both subjective and unhelpfully hyperbolic but, during a league season in which little has gone right, Leicester do have a chance to continue their fantastic journey with an astonishing final chapter. Continue as he is, and this might just be the first of many for Craig Shakespeare.