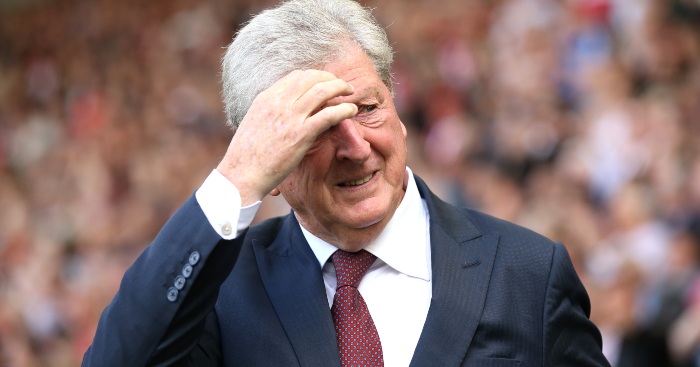 From Crystal Palace, that was the type of early-season performance that from almost anyone else might have Sam Allardyce texting Sammy Lee to get the old band back together. But Big Sam has already played his greatest hits at Selhurst Park, making David Moyes the most obvious candidate to replace Roy Hodgson.

The need for that appears more great than even before kick-off at Sheffield United when Hodgson was already the favourite to be the first Premier League manager to lose his job. In many ways, it is not Hodgson’s fault. Palace haven’t given him the tools for the job this season, but there still remains an expectation of maximising those at his disposal.

Palace, however, turned up at Bramall Lane seemingly without even the sketch of a plan. Certainly not an original one, nor one to counter Chris Wilder’s blueprint for the Blades.

Hodgson picked an XI of players left over from last season, with Wilfried Zaha in the side after being eased back into duty as a substitute during the 0-0 home draw with 10-man Everton last week. Zaha’s mere presence appeared to be Hodgson’s best and only hope but once United snuffed out the attacker’s threat, there were no other questions posed of the hosts in their first home game in the Premier League for 12 years.

Zaha carried Palace for much of last year, especially away from home. The Ivory Coast star had scored six in his last seven on the road at the back end of last season, with 90 per cent of his goals and half of his 10 assists coming away from Selhurst Park. Sheffield United expected to encounter a bristling Zaha, one fuming over Palace’s reluctance to grant him a move but still keen to showcase what he can do for whichever suitors might wait until next year. But the Blades were ready for him.

Playing in a front two with a mannequin of Christian Benteke, Zaha found himself under strict supervision from Wilder’s defence, especially Chris Basham and George Baldock. Zaha seemed to be lurking around the areas Palace hoped the rampaging United defenders might vacate, but at no point was he able to catch any of them off guard. Baldock, Basham and Jack O’Connell on the opposite side had a blissful old time flying forward in a manner which surprises no one anymore, perhaps aside from Palace and Danny Mills. But the Eagles lacked the nous or ability – probably both – to get the ball forward quick enough to capitalise on any absences at the back.

It didn’t work in the first period and Zaha through the middle was an even more dismal failure in the second period. He barely had a kick, aside from those to his ankles whenever the ball was in his vicinity, while the Eagles surrendered with the kind of meekness that usually precedes a more drastic change.

Prior to that, it is hard to see what Hodgson can change to tease a tune out of these Palace players. One possibility could be the shifting of Zaha into a wide position and nudging Max Meyer inside to play off the main striker. But at centre-forward, Palace can only pick from Benteke, Jordan Ayew – a pair who scored a single Premier League goal each last term – and the fit-again Connor Wickham. Failing to address that obvious weakness in the summer should be grounds for relegation in itself.

Underrated striking partnership between Christian Benteke and Wilfried Zaha this afternoon – here is their pass map to one another. pic.twitter.com/ihINS4plPw

Palace need their squad to be greater than the sum of its parts but this is a dressing room which has listened to Hodgson for nearly two years now. Most top-level squads tire of the same manager’s voice after a couple of seasons – many drift off far quicker – and Palace’s lack of appetite even for a fight will be ringing alarm bells in the Selhurst Park boardroom.

Palace’s dire display should take nothing away from a hugely impressive performance from United. Seb Stafford-Bloor made the Blades our early winner last week after watching them take a deserved point of Bournemouth in the same style in which they earned promotion and the one many presumed Wilder would not have the balls to retain in the top flight. But they attacked with creativity and flair from all areas while defending with the grit and organisation that will keep out sides more potent than Palace over the coming months.

Palace, in contrast, may need a new voice just to eke the same results from the same players. It may be Moyes’ Scottish twang – he’s the most prominent member of the British Manager’s Club currently looking for gainful employment, Allardyce aside – or perhaps enough time has passed since the Frank De Boer disaster for Steve Parrish to consider a more continental tone. Regardless, Hodgson’s words either aren’t inspiring confidence or they are falling on deaf ears.