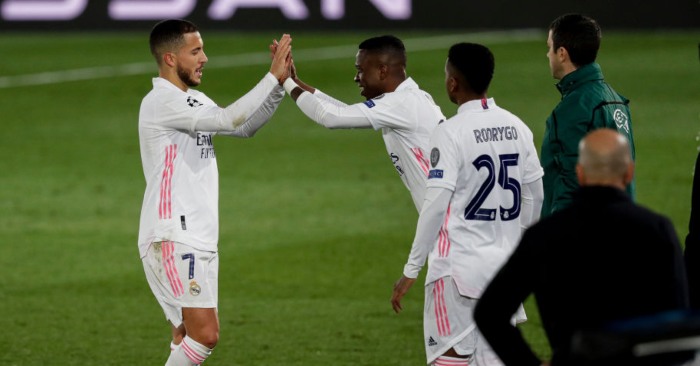 It was not brave of Zinedine Zidane to haul off Eden Hazard and Marco Asensio and replace them with Vinicius Jnr and Rodrygo on Saturday when Real Madrid were cruising against Huesca, but it was definitely brave to repeat the trick against Inter Milan when the score was 2-1, the Italians were in the ascendancy and all eyes were on Spain, waiting with poised schadenfreude to see Madrid stranded in rock bottom of their Champions League group.

Inter did equalise quite soon after that double substitution and Zidane’s decisiveness could have looked like folly, until the two young Brazilians combined quite brilliantly to score the winner.

It must have been particularly sweet for Vinicius, the subject of a deeply hurtful conversation between Karim Benzema and Ferland Mendy at half-time of last week’s Borussia Mönchengladbach draw when the Frenchmen agreed that they should not pass to the winger, with the striker saying: “On my mother’s life, he is playing against us.”

Benzema later apologised but it’s telling that it was Vinicius who lost his place in the Madrid side while the Frenchman played on. He sat on the bench alongside Rodrygo – yet to score this season – as a ridiculously open and frantic game unfurled before them. Benzema was as influential as ever but there was not enough movement from either Asensio or Hazard as they stodgily stumble towards full fitness.

Zidane’s pair of young Brazilians made all the difference, injecting some impetus into Madrid as Inter continued to look open and vulnerable at the back.  When the goal came, it owed everything to the pace and delivery of Vinicius and then the control and finish of his compatriot.

“I am very happy for them, the change was to contribute,” said Zidane. “The play was very good. We had to add the three points and we, with the contribution of Vini and Rodrygo, who scored a very nice goal, we have to be happy. But with everyone. The team shows an impressive character, all of them.”

It is certainly impressive that Real are now unbeaten in four games after the turmoil of last month when they lost back-to-back games against Cadiz and then embarrassingly Shakhtar, for which Zidane took total blame. “I am responsible and I have to look for solutions because that cannot happen,” he said. Solutions were found, with the victory over Barcelona being credited largely to the Frenchman, who used Vinicius on the left flank to stretch the play and leave space in the centre for on-rushing, energetic central midfielders to go beyond Benzema.

But despite the convincing victory over Barcelona and their comfortable La Liga position, Real Madrid managers are judged almost solely on their performances in Europe. The Borussia Mönchengladbach draw was better than the Shakhtar defeat but it was tainted by those words from Benzema, suggesting all was not well in Madrid. Had Real lost or even drawn to Inter on Tuesday night, Mauricio Pochettino and Raul’s faces would have been plastered across the pages of the local press. But Zidane found solutions in his pair of much-maligned Brazilians and most would now back him to deliver Real to the knock-out stages. Even with just four points from three games, they are still shorter odds than Manchester United to win the whole damned thing.