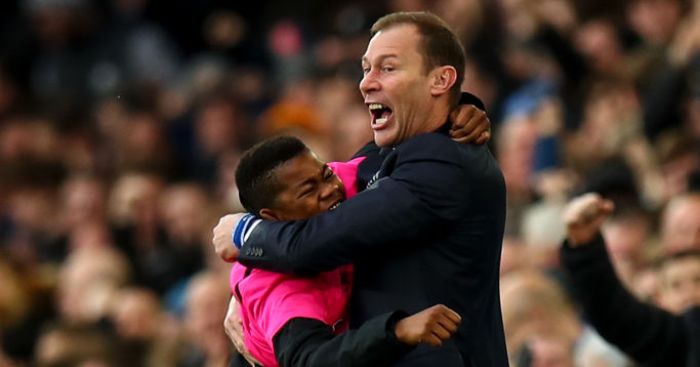 Managers are not typically embodied by their first goal in charge of a new club. Manchester United’s under Ole Gunnar Solskjaer was courtesy of a free-kick in Cardiff, not a corner at the Nou Camp. A German broke Liverpool’s Jurgen Klopp duck, but Emre Can neither gurned nor gegenpressed after scoring from a couple of unmarked yards against Rubin Kazan. Jamie Vardy heralded the start of Leicester’s bright new era, as opposed to a portrait of Brendan Rodgers latching onto a Youri Tielemans through ball in March and finishing past Ben Foster.

This was different. A sensational cross, a header to match, and a thunderous Goodison Park enjoying itself once more. Duncan Ferguson skipped down the touchline but could just as easily have played the role of Richarlison on the pitch.

Arsenal and Freddie Ljungberg have shown in recent weeks that a caretaker manager does not guarantee sweeping changes or even a clean break from the past. It requires both a level of acceptance that something was broken, but also an acknowledgement that it has to be universally fixed. All facets of the club have to start pulling in the same direction; for too long, Everton have hosted the world’s biggest and most complicated game of tug of war.

It certainly helps if the one demanding immediate improvement is a large, angry Scotsman. Ferguson’s call for “blood and thunder” against Chelsea was never likely to be ignored.

A first home win since October was delivered through goals five minutes into the first half and four into the second, as if to underline the impact of Ferguson’s message. His team talks must have still been ringing in the ears of players desperate to make amends for their failures, to play for the badge and the fans.

By the time Dominic Calvert-Lewin secured the points with his second of the game in the closing stages, all was forgotten. The consternation under Koeman, the apathy of Allardyce, the Silva setbacks, even the Unsworth unhappiness: all fell into the void of Ferguson embracing anyone and everyone he could find to celebrate with.

He is not the answer. The man himself has already made that abundantly clear. “I am here to steady the ship until they find whoever,” was Ferguson’s response when asked about a potential permanent role were he to impress in the interim. Choppy waters have been navigated with all hands on deck.

His deployment of 4-4-f**king-2 was in direct contrast to Silva’s formational shifts. But Gylfi Sigurdsson and Morgan Schneiderlin as a central midfield pair seemed tantamount to surrender against a Chelsea team excellent on the road and in the middle.

It turns out the coach with five years of first-team experience knows rather more than @Richarlisauce on Twitter or the fools employed to write post-match reaction pieces. Schneiderlin was imperious and Sigurdsson made two vital interceptions in his own penalty area as stoppage time closed in, even with a two-goal cushion for comfort.

Theo Walcott, often derided in these parts, was sublime. Calvert-Lewin, similarly criticised for his weaknesses instead of praised for his strengths, had as many shots on target as Chelsea overall. Sidibe provided an almost laughable three key passes, seven tackles, four interceptions and three clearances.

These are not numbers they should be expected to maintain. Such a ferocious press and insatiable hunger cannot possibly continue into the upcoming fixtures. There is a point at which relentless passion cannot cover for all deficiencies.

But this was a considerable step in the right direction for a club that has been aimless for too long, an overdue reminder of who they are after being gripped by an identity crisis. For at least 90 minutes – and for the first time in years – fans, players and the manager all had a club to be proud of.