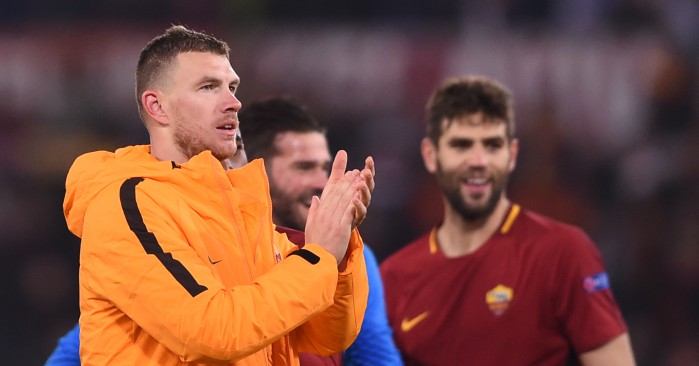 “I didn’t want to go in January because I want to play these kind of games,” said an elated Edin Dzeko on Tuesday night. Yes, he could have played in a Champions League last-16 clash for Chelsea next season, but it would not have meant this much. It would not have made his heart leap and his spirit sing in quite the same way. This is the man who said in February: “Roma is part of my life now, and it always will be.” He would have never felt that way about Chelsea. It is absolutely perfect that Dzeko has reached the quarter-finals of the Champions League for the first time with the club that has made him a beloved son.

In 2013/14, Dzeko scored 16 Premier League goals for Manchester City, his contribution to their title win so substantial that Jose Mourinho named him his player of the season. A year later, he was surplus to requirements for the most damning reason in football history: City had spunked a shedload of money on Wilfried Bony. In both seasons, City had reached the last 16 of the Champions League only to lose to Barcelona, with Dzeko barely leaving an impression on the tie or a mark on their conquerors.

When he joined Roma on loan at the age of 29, nobody could have possibly predicted that Dzeko would score 66 goals in 126 games for his new club. Nobody would have cited his name when wondering (and it would be a bizarre thing to wonder) who would become the first player to ever score 50-plus goals in three of Europe’s top-five leagues. And eight Serie A goals in his first season provided few hints about what was to come. Needless to say, Dzeko and Roma then lost in the last 16 of the Champions League without laying a glove on Real Madrid.

Last season, Dzeko (after a transfer that now looks ludicrously cheap at £8m) did the improbable if not the impossible – producing the most prolific goalscoring season of his career at the age of 30. He scored an incredible 29 Serie A goals and added another eight in a Europa League campaign that of course ended at the last-16 stage.

This season, Roma are back in the Champions League and this season, Dzeko has been Roma’s “diamond” (so says defender Alessandro Florenzi). When Roma needed a 1-0 win over Shakhtar Donetsk to reach the quarter-finals of the Champions League, Dzeko produced that one goal. He timed the run perfectly and he flicked the ball past the keeper with one touch. Just as he has done dozens of times before.

“We managed to do something that had been missing for ten years,” said Dzeko, typically citing the club’s prolonged absence from the latter stages of the competition rather than his own seemingly permanent exclusion. “It is not for me, but for everyone,” he said. No Edin, this one really is for you. Even after league titles in two different countries, you suspect that this one victory means more.