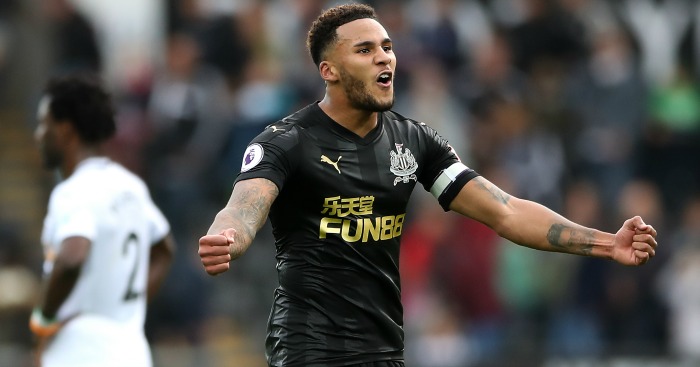 Jamaal Lascelles has had to grow up pretty quickly. Having made his first Premier League start as late as January 2016, Lascelles only became a regular in Newcastle United’s team after Rafael Benitez’s appointment. Less than seven months after that first start, he was named the club’s captain at the age of just 22.

There was no one reason for Benitez giving such an inexperienced defender the armband, but Newcastle’s manager must surely have been swayed by an interview given when Newcastle were in the midst of their ultimately unsuccessful relegation fight; Lascelles accused his teammates of failing to pull their weight.

“We need bigger characters on the pitch, players who care and who are going to get after each other,” Lascelles told the BBC. “We have lacked it this season and no matter how good you are, if you don’t have that fight and hunger and desire, it doesn’t matter.”

Do not doubt how difficult it is to lead a team of players who are both older than you and have significantly more experience. It demands both a strength of personality and a conviction in your own leadership skills. There are only two Premier League captains under the age of 27. Lascelles is the youngest by two full years.

Those difficulties only increase when your own place in the team is insecure. Ciaran Clark, Florian Lejeune and Chancel Mbemba all have designs on a place in Benitez’s first team, and at the start of the season Lascelles was forced to sit and watch from the bench as Jonjo Shelvey captained the side. The difference between the two personalities could not be greater.

If that wasn’t enough, Lascelles has led Newcastle through a period of great change. If Championship promotion was expected, it brought its own pressure to perform. This is a club again fractured by the relationship between supporters and owner, with accusations of negligence and neglect thrown in Mike Ashley’s direction after a summer of transfer market stagnation.

In these circumstances, a captain’s job is to ensure that the players’ full focus is on the matches ahead, but also to try and unite the supporters behind the team despite the off-field distractions. It is a task that has proved beyond many seasoned professionals.

Some captains lead through demonstrations of emotion and passion, the chest-beaters. Others lead through example. Lascelles’ sprint and slide to thwart Tammy Abraham when the Swansea striker had rounded Rob Elliott was magnificent. You can blame Abraham for not lifting the ball over the defender, but Lascelles made up four yards on the ball and his opponent. Plenty would have given up. This is not a young man who gives up easily.

Having saved his team at one end, Lascelles then dragged his team to victory at the other. Matt Ritchie’s corner found the defender six yards from goal and inexplicably unmarked by Alfie Mawson. The header was drilled past the excellent Lukas Fabianski.

Yet the clearest indication of Lascelles’ maturity came after the game had ended and he had applauded the away support to 3,000 cheers. Asked about his sliding, saving tackle, Lascelles smiled. “It was my fault. I was ball-watching. I have to do better.”

It is easy to place too much emphasis on a player’s words over their actions, but on Sunday Lascelles excelled in both. Newcastle’s squad may not have been afforded enough summer investment, but you cannot buy commitment.

This is a club and city that makes heroes of its loved ones. Some players revel in that, but it is just as easy to feel suffocated by the weight of expectation. It is a cliche, but the mood of Newcastle is truly defined by the results of its football team. As the leader of men, you are the leader of them.

Rafael Benitez may have missed Sunday’s game after recovering from a hernia operation, but in his captain he has the perfect standard-bearer for his own philosophy. Lascelles is proof that neither age nor experience are necessary ingredients for strong leadership.