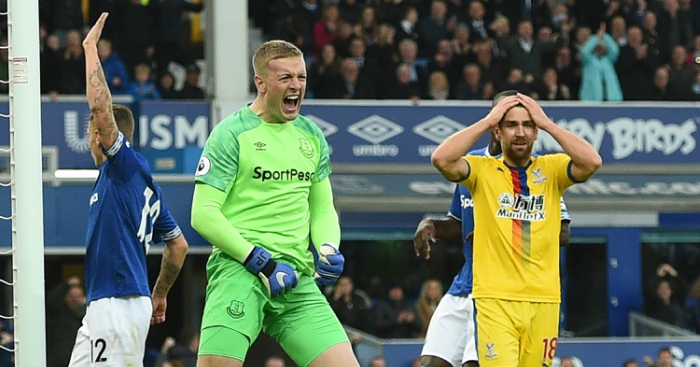 In terms of throwaway lines, it was one found during a spring clean and immediately cast out, buried at the bottom of a bin bag also containing old birthday cards, a sad, widowed old sock, and that container of questionable liquid that had been left in the fridge for months.

Not even Jordan Pickford would have expected to appear in an article naming the ten most improved players of the season so far, yet, as with trying to dribble past Rodrigo in his own area, that would be his mistake. There he was, three names down, under a subheadline of ‘… and the 10 biggest decreases’. Based on statistical rankings, England’s No.1 had regressed more than everyone but Lewis Dunk and Christopher Schindler.

This campaign has not exactly felt like a step back. It took 14 league games for the 24-year-old to keep his second clean sheet of 2017/18, but just nine this. He was playing a key role – for good and bad – in a famous victory for his country against Spain on Monday, yet had not even made his international debut 12 months ago.

But this is the kind of allegation that tends to stick: that Pickford is drifting, or that he has reached his ceiling, or is simply failing to live up to the exacting standards he has set himself. It can be an awfully difficult charge to contest, and one very easy to prove.

Sunday’s performance went a long way to dispelling the doubters. Pickford will have considerably busier afternoons, making just three saves against Crystal Palace. He was also not able to showcase his major strength, with his 62.5% passing accuracy the lowest of any Everton player. But he laid the foundations for a third successive victory that moves the Toffees comfortably into the top half.

It was midway through the second half when a deathly silent Goodison Park was rudely awakened from its slumber. Super Sunday was in danger of being rather more sleepy than first advertised, as both Everton and Crystal Palace struggled to find a foothold. As is often the case with the latter, they relied upon the insouciant talents of Wilfried Zaha to make the difference, and it almost worked. He won the penalty, and Luka Milivojevic stepped up.

So too did Pickford. He saved the spot kick with his foot – of course he did – providing the hosts with the impetus to chase three points, not settle for one. Sixty minutes were on the clock when Milivojevic’s effort was thwarted; cometh the hour, cometh the man.

It was Pickford’s third Premier League penalty save. The first came in November of last year, when he kept Tom Cleverley out in second-half stoppage-time of a 3-2 win. Later that same month, he saved from Manuel Lanzini as Everton went on to beat West Ham 4-0. This most curious of hat-tricks was completed when Dominic Calvert-Lewin and Cenk Tosun came off the bench to secure a 2-0 victory.

Both scorers will accept the plaudits, while Marco Silva deserves great praise for his crucial changes. Five minutes after bringing on Calvert-Lewin and Ademola Lookman, the pair combined for the opener. Two minutes later, fellow substitute Tosun rounded off a flattering win.

But this was an afternoon to remember the contribution of Pickford, whose rapid development should not count against him. He is still a fine goalkeeper who, 18 months ago, was the one beacon of promise in a terribly bleak Sunderland side. To squint under the glare of a greater spotlight at Everton is no crime.

And to thrive in it, as he did when face to face with Milivojevic, should not be dismissed as the norm. The regressor suddenly became the aggressor, spurring his side to victory, earning his manager’s praise, and rounding off a fine week.