Jupp Heynckes has won 48 of his last 51 matches, and has completely transformed Bayern Munich. 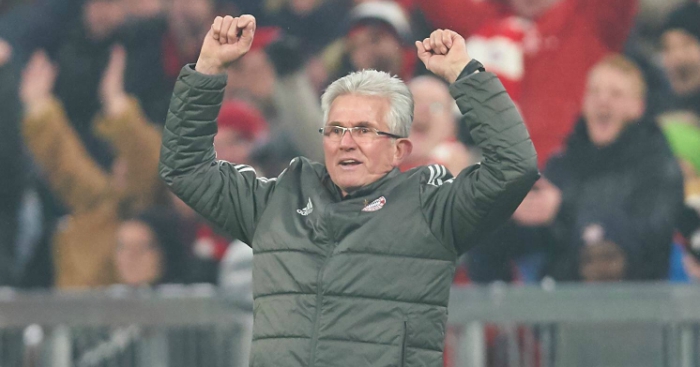 “Do you still have a goal?” asked the interviewer. “After everything that’s happened over the past two years, I’m ready for some peace and quiet,” came the response. Having finally called time on a 34-year managerial career, which immediately followed 14 years as a player, Jupp Heynckes had certainly earned his moment out of the limelight.

There might never have been a more suitable way to retire. Heynckes guided Bayern Munich to an historic treble-winning campaign in 2013, claiming the Bundesliga crown by 25 points, beating Stuttgart in the DFB-Pokal final and overcoming bitter rivals Borussia Dortmund in the final of the Champions League. Bayern finished as runners-up in all three competitions the previous season; the response to setback was quite remarkable.

Yet while Heynckes sailed into the sunset as a hero, his departure was almost instantly overshadowed. The January announcement that Pep Guardiola would replace him in Bavaria that summer ensured that, instead of basking in the limelight, Bayern contemplated the brightest of potential futures. Heynckes was already yesterday’s man, cruelly consigned to a brilliant past by the next big thing.

Hindsight shows that was a mistake. Guardiola continued the domestic dominance at the Allianz Arena, but European success constantly evaded him. He reached the Champions League semi-finals in each of his three seasons as manager, but fell to Real Madrid, Barcelona and Atletico Madrid respectively.

Pep failed where Jupp thrived. Heynckes has reached the Champions League final in every season he has coached in the competition thus far, winning with Bayern in 2013 and Real Madrid in 1998, with the penalty shoot-out defeat to Chelsea in 2012 sandwiched in between. He has the best win percentage (70.7%) of any manager in the competition’s history.

Fate has dealt him an opportunity to make it four successful runs out of four. Bayern were in a state of panic after the 3-0 defeat to PSG in the group stage in September. They had been humbled in Europe, and were third in the Bundesliga. Carlo Ancelotti paid with his job. Julian Nagelsmann and Thomas Tuchel were linked with the vacancy, but it was Heynckes who received the call.

Bayern have won 22 of their 23 games since, with a 2-1 defeat to Borussia Monchengladbach in November the outlier. In fact, the 5-0 victory over Besiktas in the first leg of their Champions League last-16 tie on Tuesday was Heynckes’ 10th straight win in the competition, a run that includes PSG, and the 2013 iterations of Borussia Dortmund, Barcelona and Juventus. The last club to beat him in Europe was Arsenal in March 2013.

But this phenomenal individual run is not isolated to the Champions League. Of his last 51 matches in all competitions as a manager, Heynckes has won 48. Bayern are 19 points clear in the Bundesliga, in the semi-finals of the DFB-Pokal, and are virtually guaranteed a Champions League quarter-final place. History is somehow repeating itself.

Domagoj Vida’s first-half red card certainly aided Bayern’s chances, but this was still a professional performance; Heynckes demands no less. He has helped Thomas Muller rediscover his form, and the German scored twice at the Allianz Arena. He has given James Rodriguez a new lease of life, and the Colombian was great before his early injury-enforced removal. He has dealt with the absence of Manuel Neuer by giving Sven Ulreich his chance to shine, and the 29-year-old kept his third clean sheet in five matches.

Heynckes has also been brave enough to make the sort of decision Ancelotti regularly avoided. Arjen Robben and Franck Ribery were benched on Tuesday, with Muller and Kingsley Coman featuring in the wide positions. With such a giant lead in the league and a squad depth that sees such big names left out, Bayern might be this season’s Champions League dark horses, and Heynckes the master jockey.

It is no secret that Bayern hope to persuade the 72-year-old to extend what is already his fourth tenure at the club beyond this season. The Bavarians tried to build on his monumental success five years ago by appointing first Guardiola and then Ancelotti, but neither was able to scale those heights. Heynckes is proving more than capable of repeating his own party trick.

“I have a problem with the finality of saying ‘never’,” he said in that 2013 interview upon his retirement. “But I can assure you that I have no intention of coaching again. I had a worthy ending.” Few would have argued then, and yet Heynckes is threatening to outdo even his greatest achievement. There is plenty of life in the old dog yet.