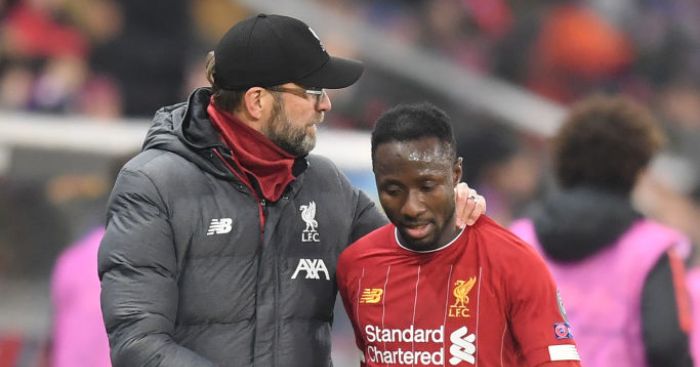 Little over four minutes had passed when Mo Salah was presented with the first of a quite baffling nine chances. The Egyptian’s first touch was impeccable, his second less so. Cican Stankovic did what Maximilian Wober couldn’t and stifled the threat.

It came from what everyone (aside from perhaps Divock Origi) would describe as an unlikely source. Dejan Lovren was reprising his role as centre/quarterback, turning defence into attack with a single swing of his boot and a 60-yard pass.

Liverpool were still drawing, marginally uncertain of their Champions League fate, by the time he was substituted. Jurgen Klopp’s admission that “we hope it’s exactly the same as last time” – cramp – shows just how excellent Lovren has been.

So too Naby Keita. His goal was simple enough, a header to complement Sadio Mane’s fine work as Salzburg were hoist by their own scouting petard. But his overall performance was exceptional. It’s now, as it turns out.

Thus Klopp’s greatest strength was encapsulated. To coin one of his predecessor’s many phrases, football management is “like trying to build an aircraft while it is flying”. Liverpool are maintaining altitude while simultaneously replacing several parts of the engine and exterior.

Lovren was almost sold in the summer. “I started from zero again,” he said in November, having been omitted from the club’s first six Premier League match-day squads. Joel Matip’s injury left ajar a door he has summarily slammed shut behind him: Liverpool have won 11 and drawn just one of the 12 games he has started this season.

Keita was the subject of ridiculous speculation even before last season had ended. The nature of his arrival in summer 2018, in a deal that was announced 12 months in advance, meant the disappointment at his struggles was palpable. The loss of Fabinho for such a crucial, busy month was the gain of a player who was forced to either perform or permanently lose his place. Keita made his first Champions League start of the season in October and his first Premier League start in December; he now seems indispensable.

Klopp has something of a knack for this. His two full-backs in Austria on Tuesday are considered perhaps Europe’s best pairing, yet both were beneficiaries of circumstance. Nathaniel Clyne started 37 Premier League games at right-back under the German in 2016/17 but a long-term back injury before the start of the next season allowed Trent Alexander-Arnold to establish himself as a starter. Alberto Moreno started 12 of Liverpool’s first 14 Premier League games at left-back in 2017/18 but an ankle injury kept him out from December to February, with Andy Robertson to blame for his absence thereafter.

In hindsight, both would eventually have taken whatever chance they were afforded and broken through; they are considerable upgrades on what came before. But the cases of Lovren and Keita are different: these are players who had already been given opportunities, who had long been usurped in their positions, and who were tasked with replacing two of the club’s best recent performers without missing a beat.

Liverpool continue to play most games with 5 or 6 out injured, but whoever comes in just hitting the groove immediately right now. Hard to believe the levels of 2019: won the Champions League, top of league by a distance, won Super Cup, won CL group. & 24 wins from last 25 in PL

Mission accomplished. Liverpool are in the Champions League knockout stages and eight points clear atop the Premier League table having handed starts to 20 players in both competitions. Consistency and stability might be key, but Klopp has embraced constant change.

At a time when Manchester City are imploding in defence because of Aymeric Laporte’s unavailability, and increasingly one-dimensional in attack without Leroy Sane, that should not be overlooked. Those who ponder how Liverpool would cope with similar injuries ought to bear in mind that Adrian has played more often than Alisson, their fourth-choice centre-half has had to feature more regularly than their unsung defensive hero and they have won four successive games without arguably their player of the season so far. Klopp has ensured that nothing will knock them off course.