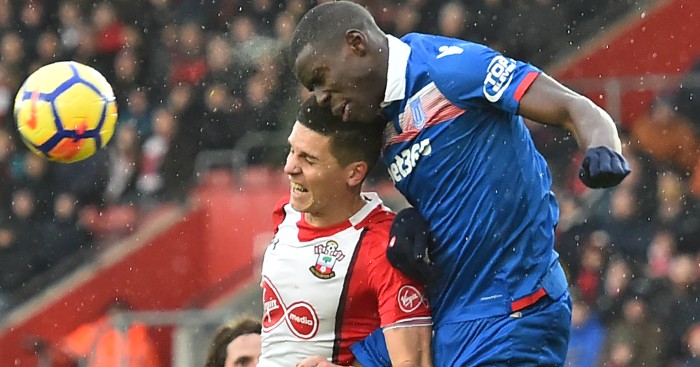 Very few coming away from St Mary’s on Saturday evening will reflect too fondly on their afternoon. A single point earned when some will say six were at stake feels like a missed opportunity for both Southampton and Stoke but the Potters will look upon their reward with rather more satisfaction than their hosts.

Once again under Paul Lambert, a point was the product of a stoic defensive performance, typified by the determination of Kurt Zouma and Bruno Martins Indi. It said a lot about Lambert’s satisfaction with his centre-halves that, even with Ryan Shawcross available again, the club captain was left in reserve while the Potters fought for their third clean sheet in six games under the new manager.

The prospect of such defensive stability seemed impossible when Lambert took over in the middle of January. He inherited the Premier League’s leakiest rearguard from Mark Hughes, and while they retain the worst record in the division for goals conceded, the torrent has certainly subsided.

At Southampton, where in the first half the fear of losing outweighed the reward for winning for both sides, when the hosts finally showed some attacking intent in the second half, they found Zouma in commanding form again, a week after Jamie Vardy had been shackled at Leicester. No one at St Mary’s made more clearances or headed clearances than the on-loan Chelsea centre-half.

It was typical of the resilience the Potters have showed since Lambert came in. Prior to the Scot’s arrival, they were shipping 2.1 goals per game. In the six games since, that has dropped to 0.66 per game, and Zouma is the only ever-present centre-back throughout that period.

Zouma gave an insight into what Lambert had done to provoke such a defensive improvement and there is nothing complex or sophisticated about the manager’s approach: “It’s not particularly about the players who are selected or the system,” said Zouma. “It is about a desire not to concede and being ready for everything.”

Lambert has spoken about his desire to retain Zouma next season but that possibility will hinge on a number of factors. Firstly, whether the Potters can stay in the Premier League, and even then, you would expect that whoever is managing Chelsea next season will want a closer look at the 23-year-old before allowing him to leave once more.

No longer is the France international a rookie on the Premier League stage. With his fitness restored after last season’s serious knee injury, Chelsea will likely be keen to make a long-term judgement on whether or not he or the proceeds from his sale would be more use to the club going forward.

More immediately, while this point does little for Stoke, it keeps their recent momentum going. It does the same for Southampton, though that is a rather more damning indictment on the Saints.

Maurcio Pellegrino said last weekend that the late draw at Burnley ‘felt like a win’ though a week later, this stalemate should be viewed rather more ruefully. With this manager, however, it is hard to tell.

Pellegrino’s approach to the season appears to centre around doing just enough. A point per game should be sufficient to survive, and the Saints seem all too willing to achieve the bare minimum.

With the Saints in mind, Daniel Storey asked this week: is it better to be plunged into crisis that forces you to make a change rather than gradual decline that generates further unmerited faith?

Stoke sunk to the depths that meant decisive action simply had to be taken. Under Pellegrino, Southampton have treaded water all season without being pulled under the surface, but they are now circling the drain as perilously as anyone else.

A run of just one win in 15 matches and a club record eight home games without a victory means that some Saints’ home fans will likely to be glad to see the back of their side for the next six weeks. The boos at full-time on Saturday certainly suggest so. Pellegrino now takes his men on a five-game road trip before returning to St Mary’s for a date with Chelsea on April 14 by which time they may well have sunk into the drop zone.

In contrast, in that same period, Stoke will fight three of their next four battles on their own patch. Granted, two of those opponents are Manchester City and Tottenham, who have won their last two visits to the Britannia 4-0 and over the last four meetings have outscored the Potters by 17 goals to one.

But this new stingy Stoke side will prove a far tougher test for the likes of City and Spurs, as well as Everton and Arsenal who they face in between. As impressive as Zouma’s form has been in recent weeks, perhaps the next four tests will be an even more precise gauge of his long-term prospects.