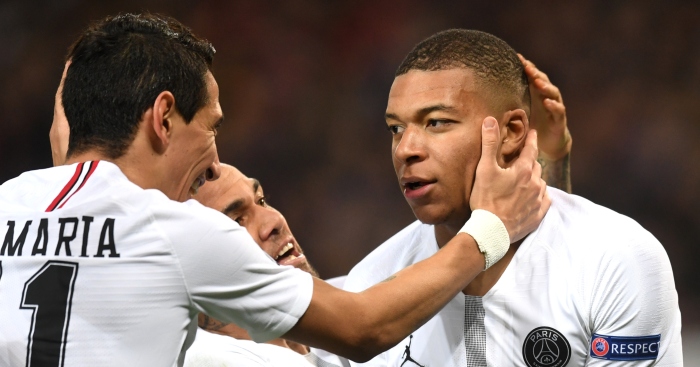 “I do not care about the Ballon d’Or, I want the World Cup,” he said as France booked their place in the final with victory over Croatia. The contrast with his PSG teammate Neymar could not be greater. This is a player who left Barcelona basically to be the main man, to give himself the chance to play No. 10, to win individual awards, to strengthen his brand. How ironic then, that the move only took him further away from those individual awards, dropping from third in 2017’s Ballon d’Or rankings to 12th in 2018. Mbappe? He rose from seventh to fourth. Winning a World Cup helps, but basically the boy is bloody brilliant.

His goal against Manchester United was his 14th in the Champions League in just 24 appearances, drawing him level with the original Ronaldo (who took 40 games to reach that number) and taking him within this season’s reach of Ronaldinho and his 18 strikes. Within two seasons we should reasonably expect to find him claiming the scalp of Rivaldo (27). He will still only be 22.

Right now he is still only 20 and not just the greatest young player in world football but very close to being the greatest of all players in world football. Not that he cares. He is just hungry to add to a trophy collection that is already utterly ridiculous – two Ligue Un titles, a World Cup and a couple of domestic trinkets have been claimed as a teenager. Show-off. His ambition to add the Champions League with PSG is palpable, driven not by a selfish greed for glory but a desire to conquer all, particularly with his hometown club.

“We are annoyed because we could have scored a third,” said an unsmiling Mbappe after the 2-0 victory at Old Trafford. He added that “in the last 20 minutes we dropped off a bit physically”, as though winning 2-0 really wasn’t all that. It’s difficult to imagine any other young footballer finding fault with his team’s performance just seconds after the final whistle of a game they had won at a canter. But this is Mbappe and he is notoriously driven by a quest for trophies.

“The Champions League is a dream, a competition that everyone wants to win and that only a minority can win – the most important are the titles,” said an 18-year-old Mbappe in 2017. “That would be much more of an obsession for me than the Ballon d’Or, for example. I want to touch the stars and, when you dream, you do not dream of playing the middle of the table or maintaining it.”

He may not dream of the Ballon d’Or but it is likely to be an inevitable consequence of his phenomenal talent, aided but not defined by the kind of speed that can make you chuckle out loud. Ole Gunnar Solskjaer selected Eric Bailly over Phil Jones for his pace on Tuesday night, but it was akin to selecting a hare instead of a tortoise to chase a panther. Combine that speed with intelligence, an excellent first touch and a striker’s instinct and you arrive at Mbappe, who has already scored 23 goals this season and could end the campaign in 40-plus Messi territory. Those who counter those numbers with ‘it’s only France’ should note that he has also scored against Manchester City, Bayern Munich, Borussia Dortmund, Liverpool, Juventus and now United. And yes, he is still only 20.