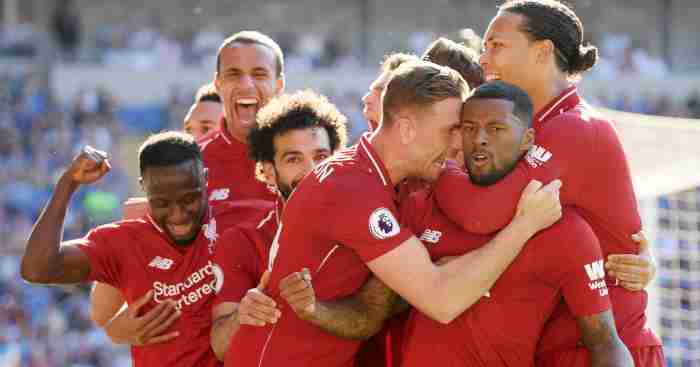 “Over to you, Liverpool,” said Gary Neville after witnessing Manchester City show the brass balls of champions to defeat Tottenham just three days after Spurs ruined their dreams of the Quadruple. The title pressure was indeed shifted to Merseyside but after receiving it gratefully and treating it to a day trip to south Wales, Jurgen Klopp’s men thrust the ticking time-bomb back into City’s hands by disposing of a booby trap laid by Neil Warnock.

With a 2-0 win at the Cardiff City Stadium, Liverpool passed perhaps the toughest remaining tactical and mental tests of their title credentials. Against a side scrapping for their Premier League lives led by a curmudgeonly old manager who would have loved nothing better than to put the Reds in their place for a perceived ‘lack of class’, Klopp’s side showed similar mettle to City a day previously to swap pressure for momentum once more.

Liverpool were winners before kick-off and by full-time they regained top spot. Of course, they will have to relinquish their place at the summit should City win their game in hand, which comes on Wednesday when the Manchester derby takes place at Old Trafford. If City triumph there, the defence of their title rests squarely in their hands. But Liverpool have done their bit to make the derby a must-win affair; any less than three points at Cardiff would have offered the champions a shot in the arm and, more importantly, room for error against United.

City’s focus will be absolute but, fortunately for Liverpool, their own neighbours ensured City’s local rivals must at least offer the illusion of focus and desire. United were coasting into a derby they may have played in flip-flops but Everton’s rampant humiliation of the Red Devils at Goodison Park puts Ole Gunnar Solskjaer’s side under huge scrutiny. The United players will face an examination of their attitude which, had it gone unchecked by Everton, would probably have seen them wilt in the face of City’s determination on Wednesday. Now, United have to be seen to be trying to beat City, even if that means providing a reluctant favour for their greatest rivals.

Warnock was in similarly-stingy mood on a hot, sticky Easter Sunday in Cardiff. The Bluebirds laid out a pristine carpet for their visitors to play on but their warm welcome did not extend to watering the pitch for Klopp’s slick pass-and-move masters. Nor should it.

Klopp, though, has learned his lesson. Having complained previously when Liverpool’s hosts refused to create a ready-made environment for their own downfall, the Reds boss countered Cardiff’s not-so-cunning plan by training on Saturday in the absence of grease on the turf at Melwood. It did the trick, even if Liverpool’s forwards failed to take their first-half chances, with Roberto Firmino most culpable by firing high and wide when sent through on Neil Etheridge’s goal.

Gini Wijnaldum was considerably more clinical when smashing in Trent Alexander-Arnold’s low delivery from a corner routine the Liverpool players apparently plotted at half-time. The midfielder’s timing of run and strike were perfect, despite the ball arriving more slowly than he might usually expect having taken a single bounce off the scorched turf.

Sean Morrison had a glorious chance from Cardiff’s own corner from the right soon after but, with an open goal gaping and Alisson absent, the centre-back took his eye off the in-swinging ball which consequently missed the centre-back’s head completely. It was the moment the Citys of Cardiff and Manchester had prayed for but the Reds and their keeper escaped, lending more weight to the feeling that this may indeed be Liverpool’s year.

88 – Liverpool have now amassed 88 points in the league this season, their best ever total in a Premier League season; adjusting to three points for a win, they have only earned more in a top-flight campaign in 1978-79 (98) and 1987-88 (90). Machine. pic.twitter.com/edp4XD7std

Morrison’s contribution in the other box and the penalty that came from his grapple with Mo Salah will feed the growing belief around Klopp’s side and so too Warnock’s conspiracy theories about Premier League officials. This, though, was a mess of Morrison’s making, with Cardiff’s stoic performance of the first three-quarters of the match rendered a waste by their inadequacies in both boxes after going behind.

Liverpool can now sit back and “see if United are ready” on Wednesday before they face Huddersfield on Friday night. Having avoided a slip-up on a sticky pitch here and in their eight games before going to Cardiff, it seems only a catastrophe or an unexpected Champions League hangover might see the Reds drop points in their remaining three games against Town, Rafa Benitez’s Newcastle and Wolves – three sides with little to play for.

City’s final three matches, on paper at least, could offer similarly safe passage to nine points. But first, Guardiola has injuries to contend with as well as an embarrassed United side obliged now more than ever to aid their greatest rivals’ quest. The title may be in City’s hands but Liverpool’s relentlessness has ensured they will have to juggle it with the greatest burden of pressure ahead of a defining derby.