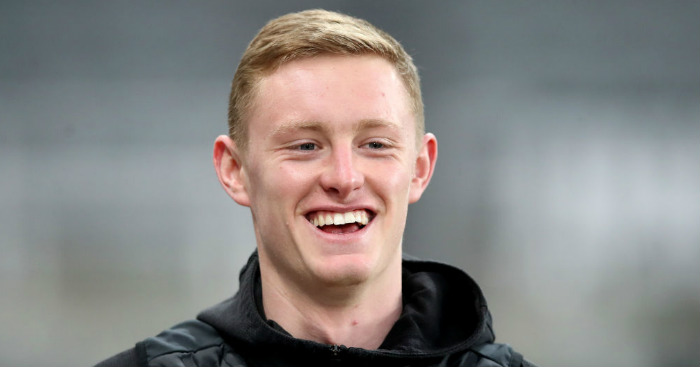 With money ruling all and the transfer market offering the exciting prospect of quick fixes, it is inevitable that fans will clamour for investment in their squads – particularly when their club’s owners have a track record for refusing to spend.

The happy positive of the kind of Scroogery to which Newcastle and Tottenham fans have become accustomed is that it can lead managers to go back to the old ways, and instead pluck players from the club’s youth ranks. On this occasion, Mike Ashley’s tight-fistedness has squeezed Newcastle coal and produced a diamond.

Sean Longstaff only make his senior league debut for the club on Boxing Day, with his only previous appearance for the club coming in a 3-1 Carabao Cup defeat to Nottingham Forest back in August. Yet the 21-year-old local lad from North Shields has already established himself as an undroppable member of Rafa Benitez’s squad.

“When he trained with the first team, he was doing well and was lucky enough to make his debut sooner rather than later because of injuries. But he then deserved to be there, so we decided to keep him in the team,” said Benitez.

That decision has helped turn Newcastle’s season: while he is clearly not the sole factor in their recent improvement, 13 of their 31 Premier League points have come from the seven games Longstaff has started. They have conceded just five goals and kept three clean sheets across those seven games, which included away trips to Chelsea and Spurs and a famous home victory over Manchester City. Not at all shabby for a relegation-threatened side playing a new kid in a crucial defensive-minded central midfield role – in fact, so good that you could probably now tentatively but reasonably remove ‘relegation-threatened’ from the previous sentence.

For all its faults – particularly the way it encourages big clubs to horde young players – Longstaff is an excellent example of the loan system working exactly how it should. The young player who are ready for a Premier League first team at 18 or 19 are the exception, rather than the rule, and so most must find other opportunities.

For Longstaff, those came in the Scottish Premiership for Kilmarnock and in League One for Blackpool, and while his recent performances for Newcastle have led pundits to compare Longstaff with West Ham’s Declan Rice and declare him to be the new Michael Carrick (and what greater compliment could there be than that?), the managers who looked after him during his loan spells both speak of a player who is capable at both ends.

Then-Blackpool manager Gary Bowyer told Newcastle’s official website back in September: “He had a fabulous year for me, for the club and obviously for himself and Newcastle. He came in and scored some wonderful goals – [the club] put some of them on Twitter!

“He’s got fantastic ability and he’s a fantastic lad as well. He wants to get better and that was the big thing about him; he was always looking to improve, always in the office looking at his clips for ways he could get better.”

Seven different players have scored goals for Blackpool in @SkyBetLeagueOne so far.

Sean Longstaff leads the way with these four efforts. pic.twitter.com/msfq0rE4dR

“His discipline and mentality was like a player who had a lot more experience than he had and was older than he was. That has come to the fore since he got into the team at Newcastle as well.

Having scored in the first minute of an FA Cup replay away to Blackburn last month, Longstaff scored his first league goal – and, more importantly, his first goal at St James’ Park – in Newcastle’s 2-0 win over Burnley on Tuesday night, volleying the ball into the bottom corner from a Matt Ritchie cross to put the perfect finish on a move Longstaff himself had set in motion.

There is no more heartwarming sight in football than a young player scoring their first goal in front of their own fans, in their own city, for the club they supported as a child, and there is a growing sense that there may be plenty more of those to come from him in a black and white shirt. Even before the game, Benitez was keen to press Longstaff’s case to be part of the England set-up – “I don’t care if it’s the Under-20s, Under-21s or even the senior side.”

Getting off to a great start is one thing, and maintaining it is another, but with the eminently level-headed Benitez around to keep his feet on the ground, his chances are better than most.

“Sean’s humble, professional and focused. He’s a player who can be consistent,” said Benitez. Newcastle fans will be hoping he is right, and that they get to sing “he’s one of our own” for many years to come.