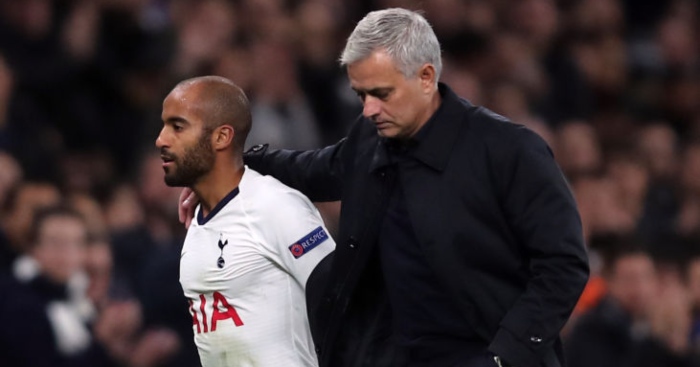 Lucas Moura is a conflicting footballer. People who don’t watch Tottenham very often will tell you he’s excellent; people who do will correct them.

They’ll say that he can be anything on any given day. A scorer of hat-tricks in Champions League semi-finals and a winner of unlikely headers in even more unlikely places. But also a head-down, take-on-absolutely-everybody infuriator who can’t pass. He can be both of those things in the same week, the same game, even the same half.

The temptation in these early days of Mourinho is to seek clarity from the past. That is, to see the initial trends developing in his new team and try to match them against something he built at a different stage of his career.

So, if a trivote sprouts up in midfield, with three bastard ball-winners and a converted centre-half, then he’s Madrid’s Mourinho. If, however, slashing wingers appear at the top of his formation and the attacking football has that knifing, out-to-in dynamic, then maybe – hopefully – he’s his 2004 vintage.

It’s much too early to tell, unfortunately, but there’s certainly reassurance in seeing Moura not only play productively, but with such economy. Or, to be more precise, only doing the things that he’s good at. That sounds straightforward and obvious, but it typically wasn’t the way under Mauricio Pochettino. For better or worse, he saw Moura as a more varied weapon and as a player who could begin moves as well as end them.

Mourinho, thus far at least, does not. He prefers to use him as a single, simple blade.

The Olympiakos game was further evidence of that. Moura had 27 touches of the ball, but only one inside his own half. He played almost exclusively from the right side of the pitch, too, and took on more opponents than any other Tottenham player, despite being substituted after just 61 minutes.

It will take a much larger sample to properly bear this out, but it’s enough around which to construct a working theory. This will be Lucas Moura under Mourinho. Instead of roaming around the pitch and being encouraged to express himself whenever the mood takes him, he will be limited to operating within one quarter of the pitch – the north-east region – where he can not only be most destructive, but also do the least harm.

The expectation won’t be for him to repeat what he managed in Amsterdam – or Manchester or at Anfield – but, instead, to consistently supply what he produced on Tuesday night. A quick break, a well-timed cut-back, and a simple goal for Harry Kane. It was hardly the kind of assist to keep Kevin de Bruyne awake at night, but so what – Moura is an instinctive, thrusting player, not a chin-stroking artisan, and it’s fine for his contribution to reflect that.

Maybe he’s really Aaron Lennon? An up-to-date, digital version, admittedly, with more skill and technical ability, but still a player whose optimal role is very similar. Stay on the right side, attack a full-back. Lennon’s career peaked early and fell away, but what a threat he was in the early days. It’s fanciful to suggest that either Mourinho or Joao Sacramento is drawing inspiration from a Martin Jol team – most likely not – but the former did coach against Lennon and his sides actually had a difficult time against him. Football has evolved, but it still rewards mismatches and it still encourages coaches to lay their dynamite around a weak foundation.

The greatest similarity between the two players, however, lies in the recognition that a simplified role suits them. Moura, like Lennon before, can be tremendously difficult to contain in a one-on-one situation. He also has a habit of getting lost when he drifts in-field, of surrendering the ball, and of being of minimal use when the side isn’t in possession.

The solution to that is to de-emphasise anything that he cannot do, to re-ration the boom-bust ratio. The modern trend may be for multi-skilled attackers occupying interchangeable roles and doing a bit of everything, but that’s only in a team’s interests if  – like Harry Kane, like Son Heung-min – the player has the right set of attributes.

Moura probably doesn’t. Or at least not in a way which can flourish without compromising the surrounding structure. He hasn’t suddenly become Mourinho’s new Arjen Robben or even his Damien Duff, but there’s certainly encouragement in seeing him being distilled back to his essence.