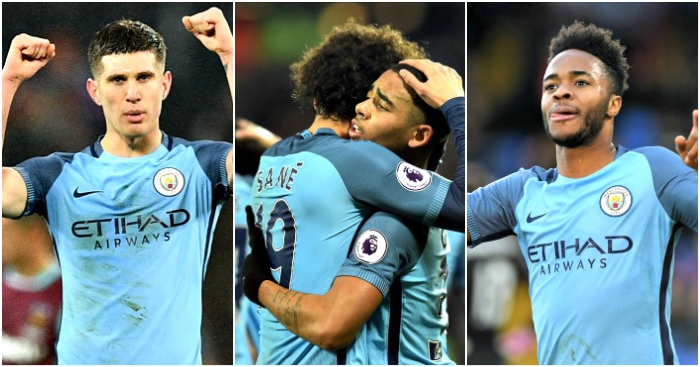 In an instant, the camera focused on Sergio Aguero. The Argentinean maintained his steely stare, his expression barely changing as the rest of us were enthralled by a brief glimpse into the future.

Manchester City had just taken a 3-0 lead against West Ham at London Stadium, Gabriel Jesus crowning his first Premier League start with his first goal in English football. Aguero remains one of the finest strikers in world football but, on this basis at least, he might have to familiarise himself with the bench.

In seasons past, the 28-year-old’s absence from the starting line-up – this one forced due to a slight injury – would have weakened City considerably. But on Wednesday evening, Pep Guardiola’s side put in perhaps their best performance of the season in a 4-0 win over West Ham.

His replacement, Gabriel Jesus, was wonderful. The Brazilian capped his first Premier League start with his first goal and assist in a man-of-the-match performance. The winter arrival looks every part a Guardiola striker: Movement, dribbling, passing, pressing, decision-making, each accompanied by a warranted arrogance. He dropped deep when necessary, and led the line when required. He is only 19.

To his left was Leroy Sane, a player who has improved both drastically and quietly over the past few months. He struggled at first after joining from Schalke, but is now displaying the sort of talent that £37m can buy. He completed the most dribbles of any player (4), and was fast, direct and skilful. His role in David Silva’s goal was a joy to watch. He is only 21.

On the right was Raheem Sterling, an individual who makes the headlines not for his continued brilliance, but because he does not wash his car in January and he buys food from Greggs. He was booed off upon his second-half substitution at the London Stadium, such is his treatment at grounds across the country. But what matters is that his club cherish him, and City certainly do. He is only 22.

So, after a City crisis when Guardiola's mental state almost questioned and when United looked formidable, the latter now four points behind

The trio represent not only the future of the club, but its present; they are good enough now. And when they combined for City’s third goal – Sane playing in Sterling who squared for Jesus to finish – it felt as though the sands had shifted. Aguero is no longer a guaranteed starter; he finally has worthy competition.

“These three players will be the future in the next three or four years, I’m pretty sure of that,” Pep Guardiola said last month. “But in the big clubs you have to achieve results immediately and that’s why they have to play good now, not in three years.” This was the perfect start.

But it was not only in attack where City averted ridiculous recent talk of a crisis. West Ham rarely threatened, but a fifth Premier League clean sheet of the season is cause for celebration, particularly when combined with an impressive showing from John Stones on his return. He made two tackles and three clearances and, in one first-half instance when he was faced with the West Ham press having received the ball in the corner flag, opted not to Cruyff turn, but chose to simply put a foot through the ball and clear it. Former central defenders turned pundits would have been wiping away a single tear. Even the smallest baby steps for Stones are successes at this stage in his development. He is only 22.

It is enough to render City’s rivals envious. In Jesus, Sane, Sterling, Stones and even 20-year-old Kelechi Iheanacho, the club have a spine of thrilling young talents, all being nurtured by one of the world’s leading coaches. Kevin De Bruyne is the elder statesman of the future, and he is only 25.

January began with talk of crisis and failure, but Manchester City enter February with a renewed vigour and focus, and with a point to prove. At the forefront of it all is their new breed, the boys in blue.