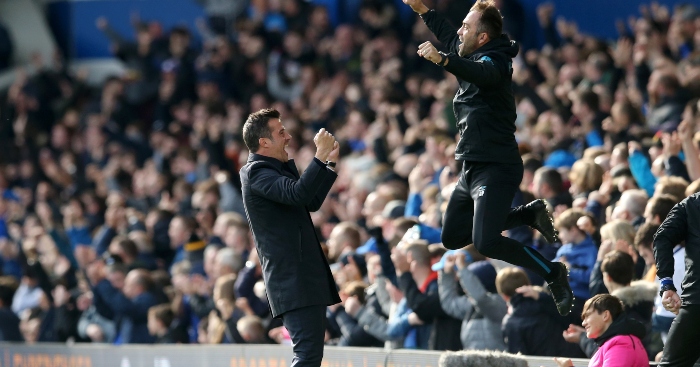 “I never had doubts about that,” said Marco Silva this week when he was asked whether he felt the backing of the Everton hierarchy. Yet he acknowledged several times after supporters turned on him after the defeat at Burnley that today’s visit of West Ham was a “must-win” encounter. Silva sensed that his job was on the line.

As did his players and the manager has struggled to look anything other than vulnerable in the long fortnight since Everton’s fourth consecutive defeat. So Silva will feel huge relief not only over the Toffees’ first Premier League victory since September 1, but also at the performance level of his side which suggested that this this reprieve might not be just a stay of execution.

Everton were very impressive. The only aspect of their display that may rankle with Silva is their failure to kill off West Ham prior to the second minute of added time. Aside from some wasteful finishing and questionable decision-making in the final third, the Toffees were a class apart from West Ham.

Make no mistake, the Hammers’ visit was wonderfully timed for Silva. There is no opponent Everton have a better record against, with the Toffees having won 54 per cent of the two clubs’ 50 meetings in all competitions in the Premier League era. Today, though, the visitors were especially generous to their hosts.

Manuel Pellegrini’s side have been on a ropey run of their own and it is now only one win in six for the Hammers. That victory against a wretched Manchester United side has perhaps applied a rosier tint to their recent form, and this performance bore no resemblance to the one they offered against Ole Gunnar Solskjaer’s beleaguered men.

The Hammers were disjointed at the back, strangely slow to press in midfield and impotent in attack. Their sloppiness was evident in the opening goal, when Bernard initially passed up the opportunity to shoot, opting instead to come back, beat each West Ham centre-back one more time before poking in from an acute angle after stand-in keeper Roberto appeared reluctant to thrust his hands towards a ball he looked favourite to reach first.

2 – Bernard has scored two goals in three Premier League appearances against West Ham, one more goal than he has in 38 games combined against every other side he has faced in the competition. Preference. pic.twitter.com/d6N7Xvhoot

But the lead was no less than Everton deserved and their margin of comfort certainly should have been greater. Silva’s changes – five to his team selection – all had the desired effect. Andre Gomes’ presence in the middle of midfield highlighted how badly he was missed for all but six minutes of Everton’s four-game losing run, with the former Barcelona star rightly earning the man of the match award.

But it was a close-run thing. Theo Walcott may consider himself slightly unfortunate to have been overlooked after a refreshingly positive display in his second start of the season. From the right, the ex-England attacker continually drove inside to support Richarlison through the middle, with much of Walcott’s best work done off the ball. Arthur Masuaku and Angelo Ogbonna never did suss out how to track Walcott’s runs before he was subbed late on.

With Walcott penetrating and Bernard his usual effervescent self from the left, Alex Iwobi was able to find plenty of space between the West Ham lines. The playmaker role is an unfamiliar one to the £30million summer signing but he looked a lot more comfortable playing off the front man today than he did in the home defeats to Sheffield United and Manchester City. Iwobi really should have killed the game off when he strolled through the heart of the Hammers’ defence but his toe-poked finish in the second half was dreadful. It was, however,  the only blight on an bright display.

That opportunity was one of 15 shots Everton attempted with 10 hitting the target – both season-high numbers. But the zero in the goals against column will satisfy Silva just as much since a clean sheet has not been seen since the opening day on only the two sides below them in the table at kick-off have conceded more often.

Silva won’t allow himself to get too complacent given Everton’s inconsistency but this was a hugely encouraging performance that should keep Farhad Moshiri onside. For now.