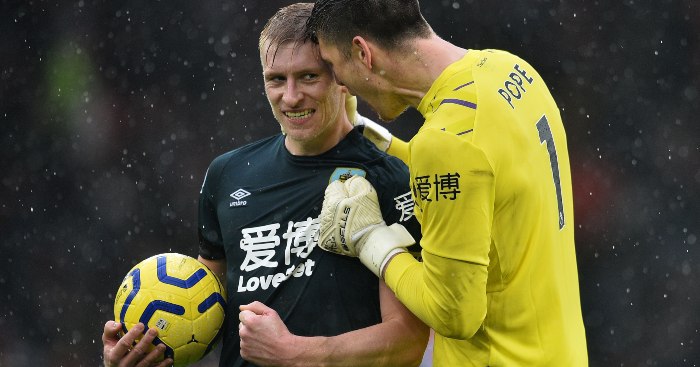 The first half of the Danny Ings derby was dominated, unsurprisingly, by Danny Ings.

The Southampton striker initially ushered Ashley Westwood’s in-swinging corner straight into the net before atoning for his error with a leveller to peg back Burnley that showcased both his dogged determination and his quality. But the second-half saw a rather more surprising face steal the show.

Matej Vydra watched from the wings while Ings hogged the spotlight but after being thrust on stage to act as stand in for Chris Wood, the Czech striker finally caught the eye as a Claret.

His first goal in 17 months was almost worth the wait such was its calibre. With Jeff Hendrick’s head up, Vydra took his cue to drift off Jannick Vestergaard’s shoulder into the chasm that had opened up between the recalled Saints defender and Jack Stephens. From there, it took a control and turn in the same cushioned touch off his chest, another glance with the left foot to evade Kyle Walker-Peters before a third, a thumping strike beyond Alex McCarthy which might still be rising had the net not interrupted its flight.

The ball from Hendrick 😍
The chest control 👌
The thumping finish 💥

That is a brilliant goal from Matej Vydra and Burnley have the lead! pic.twitter.com/tD5qPcUT05

The release in Vydra’s celebration was understandable. Not since a 4-0 win over Bournemouth in September 2018 has the £11million striker experienced the thrill of scoring a goal in any competition. Not that he’s had much in the way of opportunity. Sean Dyche has only offered him five starts in any competition since his last strike, with the only one this season coming in a home defeat to Sunderland in the Carabao Cup.

So Vydra could hardly be blamed for wanting to leave Burnley in January. There was interest, most notably from Aston Villa and Rangers. But with Ashley Barnes off having hernia surgery, Dyche decided against a deal that would have seen the former Derby striker depart.

So with Wood crocked too, this was very much a second-choice strike pairing leading Burnley’s charge against Saints for an hour. Ralph Hasenhuttl sprang a surprise in dropping Jan Bednarek to the bench in favour of Vestergaard, who has played only once in the Premier League in the last three months. The assumption was that Vestergaard had been recalled to deal with the physical presence of Wood and Vydra’s appearance seemed to flummox the Dutch defender, at least if the way he lost the Burnley substitute prior to the decisive goal is any indication.

This may have been the final time we saw Vydra in the Burnley picture since a second chance of a winter move looked to be coming from Russia. Lokomotiv Moscow were said to be one of the clubs keen to give the Czech Republic striker an opportunity to get his eye in before Euro 2020, with the Russian transfer window open for another week.

But Vydra’s stunning winner isn’t likely to make Dyche reconsider granting his fourth-choice forward a belated departure more than the health of the three strikers ahead of him. Barnes is closing in on a return but the Clarets will want to assess Wood’s injury before sanctioning any transfer.

For Vydra, this rare goal was either the perfect way to end a frustrating Clarets’ career, or perhaps represents the chance to salvage it.