With 12 goals already this season, Mohamed Salah is dominating Liverpool's attack. He is our winner... 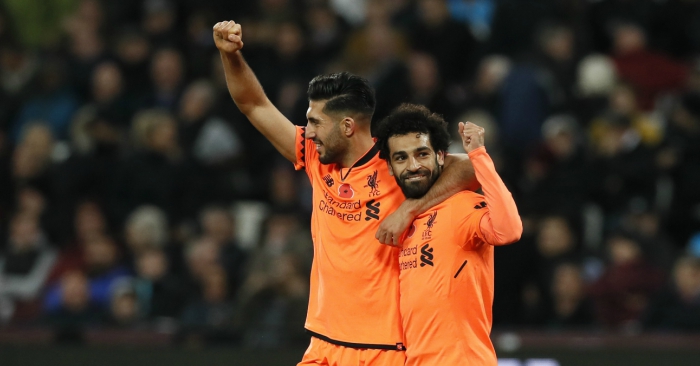 Of all the alleged errors made by Chelsea in selling players too hastily, Mohamed Salah was not one. Having Eden Hazard and Juan Mata as competition for his place was too daunting for a 21-year-old signed after 18 months in Europe with Basel. When Salah was given the chance to impress, he passed up the opportunity too readily. The suspicion was that he had pace but little else. Chelsea made £5million profit on the Egyptian, and rightly considered that fine work.

So there was something a little ballsy about Liverpool choosing to make a proven Chelsea flop their biggest summer investment. Salah had flourished in Serie A after leaving England, but there would always be an asterisk placed after any praise. The English public understandably give greater precedence to form on these shores. What happens in the Premier League, stays in the Premier League.

Yet Salah always had two things in his favour. For all the intensity, pressing, tackling and intercepting of the furiously-paced Premier League, nothing is quite as effective as pace. Leicester City’s outstanding title victory was founded on a solid base and the quick transitions between defence and attack by Riyad Mahrez. The magnificence of Pep Guardiola’s Manchester City is that they play quick, short passing triangles in possession, but can also counter at devastating speed.

Salah was also perfect for Liverpool’s style, perhaps the best fit of all high-performing forwards in Europe last season with the exception of Kylian Mbappe. With Philippe Coutinho scheming on one wing and Roberto Firmino playing as the nominal centre forward, responsibility fell squarely upon the shoulders of Sadio Mane last season. With Salah, Liverpool had doubled their number of counter-attacking weapons.

The ‘club-record signing’ tag was also a little misleading. In a summer when transfer fees sprinted beyond our idea of what was normal, paying an initial £34.3m – surely eventually rising above Andy Carroll’s £35m – for a 25-year-old, in-form forward with Champions League experience and from a fellow Champions League participant lessened the risk of Salah’s purchase. It is the same as Liverpool paid for a squad player in Alex Oxlade-Chamberlain, and less than each of Tottenham (Davinson Sanchez), Everton (Gylfi Sigurdsson), Arsenal (Alexandre Lacazette), Manchester City (Kyle Walker, Benjamin Mendy, Bernardo Silva), Manchester United (Romelu Lukaku, Nemanja Matic) and Chelsea (Alvaro Morata, Tiemoue Bakayoko) spent on signings this summer.

So far, Salah has outperformed them all. He has scored 12 goals in all competitions, two behind Coutinho’s total from the whole of last season; Coutinho was the club’s top scorer. His dominance over Liverpool’s attack is epitomised by the number of shots on target he has managed – 24 in the Premier League. Liverpool’s next highest are Firmino and Daniel Sturridge with eight.

For most of this season, Salah has played as a wide forward on the right of a 4-3-3. However, with Jordan Henderson absent and Jurgen Klopp wanting to use Oxlade-Chamberlain further up the pitch, Liverpool set up in a 4-2-3-1 formation against West Ham that was basically 4-2-4 for most of the game. If that led to more of the ‘chaos theory’ football that we have come to expect, Klopp watched his attack trample on West Ham’s limp defensive resistance.

Salah’s role in this formation was as a second striker behind Firmino, but effectively gave him a free role to do as he saw fit. That principally involved him staying close to the halfway line when West Ham attacked, the perfect fit for his own attributes given West Ham’s abysmal defensive incompetence.

This new-look forward shape worked beautifully. Each of Firmino, Mane and Salah had three shots, and each of them created three chances. Salah takes the plaudits for again being the finisher, but it could so easily have been any of the trio. With Coutinho to return and potentially play the left-sided role with Mane on the right, Klopp has another option against weaker teams.

For Salah, a reputation fully redeemed after only three months back in England. He left as an unreliable, tentative winger but returns as a free-scoring wide forward (and now second striker). The Egyptian now has 36 goals in his last 76 league matches.

Daniel Storey – Enjoyed this? Please buy Portrait of an Icon, and support research into treating and beating cancer.