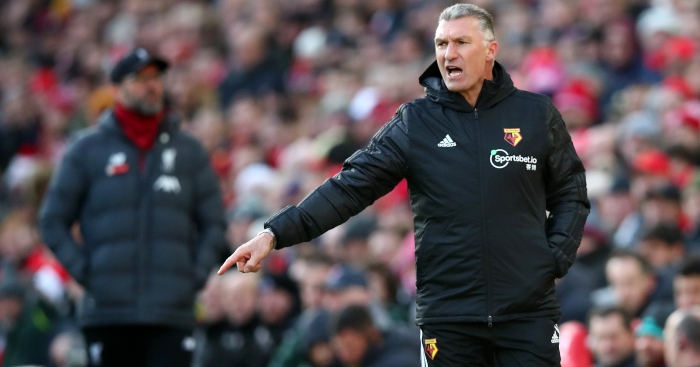 Nigel Pearson may not have appeared the most inspirational appointment while Watford stare up at the rest of the Premier League but their performance in a barely-deserved defeat at Anfield suggests the former Leicester manager has already captivated the Hornets players.

In a game which appeared as close to a home banker as you might find, Watford were desperately unlucky not to take anything from their trip to Merseyside, where the Premier League’s bottom-placed side made the runaway leaders squirm more than perhaps any other visitor to Anfield so far this season. Prior to Mo Salah’s sublime second goal in the 90th minute, Liverpool were rattled.

It can only be the Pearson effect. You would expect some improvement in terms of effort and intensity in the first game of any reign but how much can the new manager bounce really affect a club like Watford who chop and change with such regularity?

There was more to the Hornets at Anfield than simply a renewed focus and intensity. There was that too, but more encouragingly, it was accompanied by a resilience at the back and in midfield, as well as a creativity which opened up the hosts too often for Jurgen Klopp’s liking. Pearson will take great heart from those positives – but he will also rue his side’s failure to take any of those opportunities.

These were not half-chances. Watford wasted glorious openings to go in front and equalise, and though Alisson Becker will reflect on a job well done to keep a clean sheet, he was only seriously tested twice. The Hornets’ best two chances were scuffed so badly, one of them finished closer to the Watford goal than Liverpool’s.

That was Ismaila Sarr when he had a golden chance to cancel out Salah’s opener three minutes previously. Gerard Deulofeu’s low cross was palmed out of his six-yard box by Alisson but only to Sarr, under no pressure, seven yards out with the Liverpool keeper grounded. His ungainly approach towards the ball hinted at the £30million record signing’s trepidation which was laid bare in front of the Kop by a mis-hit so bad that everyone inside Anfield and those watching at home who thought they might have done better was surely right.

Sarr wasn’t the only Hornet missing his cue. Abdoulaye Doucoure did the same shortly before when he went to apply a side-footed finish but made contact with something else entirely. The ball was eventually cleared for a corner to Watford – which led to Liverpool’s opening goal as Salah wrapped up a devastating counter-attck.

When Watford were set, they kept Liverpool out with relative ease. The hosts had to wait for 23 minutes to register a shot on goal – the longest it has taken them at Anfield in the Premier League for three years. Despite facing Klopp’s first choice front three with Xherdan Shaqiri coming from a little deeper, the Hornets’ back four shielded Ben Foster extremely well while restricting Liverpool to only one big chance, the fewest they’ve created in the league all season.

Watford have been leaky all season – though not as porous as their two closest relegation rivals – and Pearson will get to work on tightening up. But the new manager’s problems are most certainly at the other end.

9 – Watford have won just nine points from 17 games this season – each of the nine previous teams to accumulate nine points or fewer after 17 Premier League matches were eventually relegated. Sinking.

The Hornets have yet to reach double figures this season having scored five fewer than Palace, the second-most impotent side, and half the number of fellow bottom-three dwellers Norwich and Southampton. Creating chances isn’t the problem – they rank 11th in the Premier League and are only three behind Arsenal – but converting them most certainly is. They have converted only 6.5 per cent of their shots so far this term.

It may be a confidence issue – with Sarr it certainly appeared so and Pearson has to get into the record signing’s head – but Deeney’s absence has not helped. January also offers Watford an opportunity to bring in goals from elsewhere.

The Hornets have been written off by many while they languish seven points off safety but with two games still to go before the halfway point of the season, Watford have plenty of time to haul themselves out of the mire. They must take the confidence harvested from this unlucky defeat into four fixtures between now and New Year’s Day, a period in which they play three home games against Man Utd, Aston Villa and Wolves with a Boxing Day trip to Sheffield United also on the agenda.

If Pearson can provoke Watford into sharpening their finishing touch, it might not require another great escape to keep the Hornets safe.