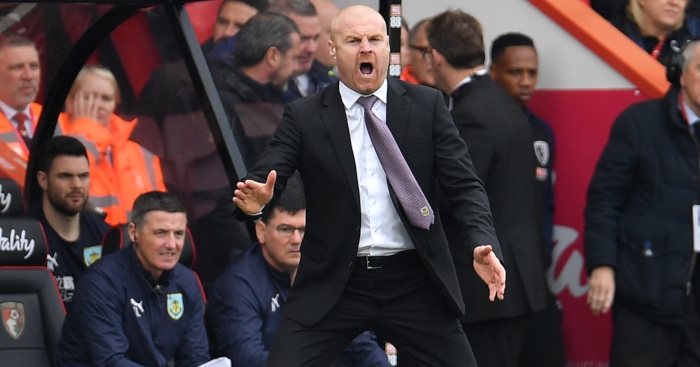 Time is tight for everyone at the foot of the Premier League table but no team is in a greater hurry to secure survival than Burnley. Their final four games make for one of the toughest run-ins imaginable, but after the 3-1 win at Bournemouth, it may not matter.

A  come-from-behind victory on the south coast takes Sean Dyche’s side from one place above the drop zone to a snug 14th in the standings. Safety is not assured yet, but a third consecutive win next week would move the Clarets 11 points clear of 18th-placed Cardiff with only 15 still within the Bluebirds’ reach. Liverpool and Manchester United stand between Neil Warnock’s strugglers and six of those precious points.

For Dyche, this is certainly firmer ground than Burnley were stumbling over prior to the international break. Three weeks ago, eight of his players disappeared to do their national duty after four consecutive defeats, the last of which being particularly deflating. Losing 2-1 at home to a Leicester side that played all but four minutes with 10 men left Dyche looking for answers many felt he might  struggle to find.

“It’s time to reflect and make sense of it,” he said after four without a point followed eight without defeat. Though the size of their international contingent was viewed as a compliment to the Clarets’ progress in recent years, the fracturing of their squad at such a crucial time was seen as just another potential obstacle ahead of what became their three biggest games of the season.

18 – Bournemouth have lost just one of their last 18 Premier League home games against sides starting the day below them in the table (W11 D6), with that defeat coming against Man Utd in November. Superior. #BOUBUR pic.twitter.com/ILzZ4r9UJp

But the change was as good as a holiday for Burnley. Beating a buoyant Wolves at home last week altered the downbeat tone, with Dyche discussing the effect of that shot in the arm before heading to the south coast today: “There’s always a slight shift in mentality when you win. A tiny bit of looseness comes back.”

That confidence boost was able to withstand the concession of the opening goal at the Vitality Stadium. With Nathan Ake breathing down his neck, Ashley Barnes diverted Ryan Fraser’s free-kick beyond Tom Heaton, but Barnes and Burnley wasted little time in making amends.

Bournemouth’s goalkeeping woes were brought into sharp focus once again when Asmir Begovic, only back in the side last week after a nine-game spell on the bench, misjudged Ashley Westwood’s corner, giving Chris Wood an empty goal to aim at on 18 minutes. Barely two minutes later, it was Westwood applying the finish after Chris Mepham made a hash of a clearance.

In contrast to the hosts’ generosity, Burnley were tight and efficient. Bournemouth dominated the ball with 60 per cent possession, but Dyche’s men made better use of it, with more shots on goal and more shots on target. There was a composure in the way the visitors went about a second half which contrasted sharply with Begovic in the Bournemouth goal. The Bosnian gifted Burnley their third by spilling a cross at the feet of Wood, who teed up Barnes to become the second player in the Premier League this season to score at both ends.

Eddie Howe made changes in personnel and formation but whatever Bournemouth chucked at Burnley, the visitors repelled with reassuring ease for Dyche. In giving nothing away at the back while making the most of their gifts at the other end, Burnley were back to “doing the details well in both boxes” which Dyche pinpointed as the backbone for their eight-game run at the turn of the year.

In 2019, only Man City, Liverpool, Man Utd and Arsenal have gathered more points. In victory or defeat, few sides are as streaky as Burnley which is no recipe for a serene season. But it looks likely to be sufficient for survival. A third consecutive win when Cardiff come to Lancashire next week would leave the Clarets safe, regardless of what a potentially-perilous final four games might bring.