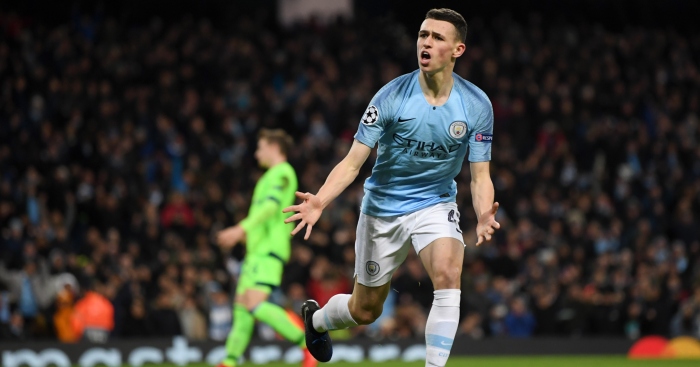 Once again Phil Foden came off the bench (for the 15th time this season) and once again he scored (for the sixth time this season) and once again Pep Guardiola faced questions about why his precociously talented 18-year-old midfielder does not play more (for the 427th time this season). It’s little wonder that the Manchester City boss is losing his patience with such inane questions; Foden really is doing fine, thank you, and being the 21st man in one of the best teams in Europe – still on course for an unprecedented four trophies – is really not a bad life for a teenager.

On Tuesday night, he became the youngest Manchester City player to score in the Champions League and the reaction from almost everybody outside the club is not ‘wow, what an achievement’ but ‘why doesn’t he play more?’. We’re only ever a minute away from one of the true blights on English football this season – a rabid, irrational fear of the Bundesliga stealing all our children, as if English players excelling in the Bundesliga was somehow a bad thing.

Foden is happy, Guardiola is happy, Manchester City are happy, England Under-21 coach Aidy Bothroyd is happy, and yet there are many who want to p*** on all their chips by suggesting that a lack of football could or indeed should see a local boy look beyond his local side in search of regular first-team football, like being trained every day by one of the game’s greatest ever coaches was worth nothing at all. And, as Guardiola has to point out almost every day, Foden is actually playing, is actually scoring goals, is actually winning trophies.

Worth forgetting to do my homework to practice for night like this! 😁😉 https://t.co/vh0Gu3ds5B

“People say Phil Foden doesn’t play too much. He is 18, it is his first season and he plays a lot of minutes already, a lot of games,” said Guardiola on Tuesday night. His minutes total for the season now stands at 876, which means he has played more football than Callum Hudson-Odoi or indeed any other English teenager at any other Big Six club. In fact, only Dwight McNeil, Ryan Sessegnon and Morgan Gibbs-White can beat that total across the whole of the Premier League.  None of those three are playing in the same position as David Silva, Bernardo Silva and Kevin De Bruyne.

“The people say he should be on loan. Phil Foden is not going to be on loan. As long as I am here he will be close to me because he is an incredibly talented player,” continued Guardiola and you can imagine how it feels to hear those words as an 18-year-old. The argument that Foden should go and play under any other manager just to play more is utterly ridiculous; why is anybody trying to rush an 18-year-old away from a privileged and lofty position within an excellent team alongside wonderful players under a phenomenal coach?

Let’s hear from the man/boy himself: “I’m learning all the time in the changing room, watching from the sidelines. Sometimes I go to the others for advice and they give it to me. It’s a pleasure to be here.” And right now it’s a pleasure to watch him. What on earth is the rush?