Home All The News F365 Says: No longer issues of squad depth at Spurs 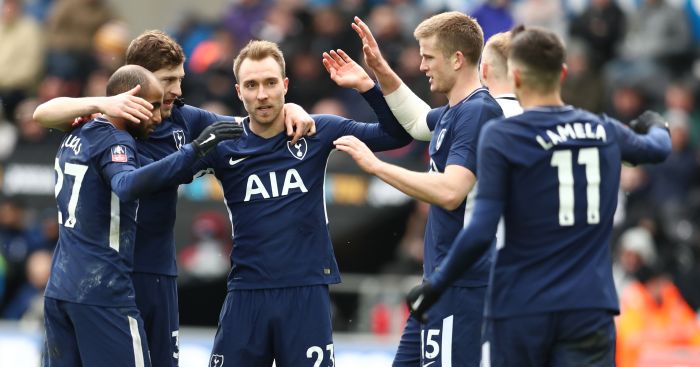 The sight of Harry Kane limping down the tunnel at Bournemouth provoked some panic among already-pessimistic England fans, with the centre-forward’s ankle injury coming so close to the World Cup. A scan this week allayed most of those concerns, though the reaction of those with a Tottenham affiliation was always more serene, despite the looming prospect of being without their captain for a month.

The 145 minutes since Kane departed last week has demonstrated why Mauricio Pochettino remained unflustered, unlike many other managers might have had they just been shorn of their best player. No Kane, but Spurs have netted seven goals spread among five different scorers, with an FA Cup semi-final place secured and those who questioned how they might respond to the crushing disappointment of the Champions League exit answered in ruthlessly decisive manner.

Son Heung-min has stood in for Kane, delivering three of those goals, while offering a clinic against Bournemouth and Swansea on how to lead the line while also linking up play further away from goal. The South Korean certainly seems to have a knack for the position, intelligently and seemingly instinctively knowing when to drift on to his defender’s shoulder and when to pull out.

Son is certainly not Pochettino’s only option and that depth is now Tottenham’s great strength. The signing of Lucas Moura and Erik Lamela’s return means where they were susceptible to injuries prior to Christmas, Spurs can now pick a forward line of three or four from anyone of perhaps seven who can be trusted to perform.

It also means Pochettino can create a bespoke attack for each different challenge, as he alluded to on this week: “We have enough quality and different alternatives, and now I have to pick who is best for every single game while Harry is out injured.”

Does any other Premier League manager have a similarly varied arsenal? Beyond Pep Guardiola, probably not.

Jose Mourinho plays with a targetman almost to the point of exhaustion for Romelu Lukaku, while Antonio Conte has tried a range of approaches, but neither Alvaro Morata nor Eden Hazard have thrived through the middle this term. Jurgen Klopp has few options other than his forward line of three, though when Mo Salah, Sadio Mane and Roberto Firmino are as effective as they are, against all types of defences, then only a major injury crisis would prompt a re-think.

Kane is without doubt one of the world’s leading centre-forwards, but Pochettino has put Spurs in the unique position where they remain fully functional without him.

They are also now fantastically situated to end the debate over whether the Argentine’s reign needs some silverware to make it the glorious success that many already feel it is.

“The process is the most beautiful thing, no?” asked Pochettino to those in attendance at his press conference before leaving for Swansea. Beauty, of course, is in the eye of the beholder and there are many Spurs fans who will be equally turned on by lifting some silverware at Wembley before moving back home in the summer. And it is a very simple way to silence Spurs’ doubters.

“Sometimes success doesn’t help you to be better,” he added, pinpointing how little difference his own Copa del Rey triumphs made to him. Pochettino also highlighted how Leicester’s Premier League title victory did not help build a sustained winning culture at the King Power Stadium.

But Spurs are now a more talented group than the Foxes who shocked football almost two years ago. That was always going to be their end game, and their struggles the following season were quite widely anticipated, though perhaps not to the extent that their title-winning manager would be axed so soon after.

Tottenham, now, are heading the right way on a very exciting journey, but with the vultures circling around the best players, who could all earn far bigger money elsewhere, a winner’s medal is the perfect reassurance for Pochettino’s men that this is a road worth staying on, despite whatever attractions lay elsewhere.

It also provides the chance for Pochettino and his squad to take further steps in proving their mentality following what criticism they received in the wake of surrendering to Juventus and falling repeatedly in the final straight during the last two title races and last season’s FA Cup.

“When you arrive, you arrive. But then you need to be ready for the next challenge. If not, all that happiness will transform into sadness.” The FA Cup is certainly not the end game for Spurs, but at some point, ideally soon, the ‘winning culture’ Pochettino speaks of has to involve actually winning.