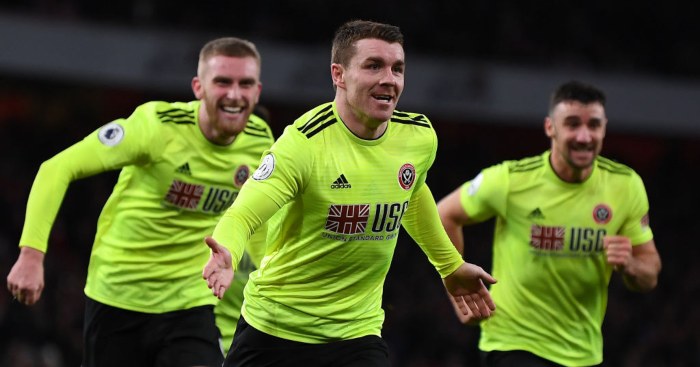 Sheffield United‘s Scottish hero John Fleck continues to be a shining light in the club’s possible assault on the Premier League’s European positions after scoring their equalising goal in a 1-1 draw at Arsenal.

Not even the most ardent Blades supporter would have expected the club to be where they are 23 matches into the season. Chris Wilder’s side sit on 33 points, seven away from 40 points – an amount that would surely see them avoid relegation this season – and now United can afford to look up after picking up another point on the road. With over half the season gone, seventh-placed Blades are just a point behind Manchester United and Wolves, who occupy the two positions above them.

Wilder has understandably and deservedly taken a lot of credit for the position the Blades find themselves in, taking an outfit floundering in League One to seventh in the Premier League in three and a half seasons. Not much has been made of the players themselves, though, who continue to meet the high standards set by Wilder and assistant boss Alan Knill. The former Halifax Town manager has assembled a squad of men that believe wholly in his philosophy and tactics, while showing they have the talent to move up the divisions. A number of the current starting XI were in League One when Wilder began his journey, with players like Fleck showing they are not just professional and hard-working – they can play a bit too.

As a teenager, a lot was expected of Fleck, not only on Football Manager but also in real life Scottish football. He rose through the youth ranks at Glasgow Rangers, making his debut at the age of 16 before becoming the youngest ever player to play in a senior British cup final as Rangers beat Queen of the South in the 2008 Scottish Cup showpiece.

Fleck was lauded as the next big thing in Scottish football with some hailing him as ‘Scotland’s Wayne Rooney’. Reported issues with coaching staff and a serious injury scuppered his progress at Rangers and he was allowed to join League One Coventry City in 2012. During his time with the Sky Blues Tony Mowbray described Fleck as “the oil in our machine” before he left in 2016 to join Wilder at United.

John Fleck is 🔛🔥 this season. pic.twitter.com/mCh47Bx9eW

Looking at his performance against Arsenal, Fleck has now become the oil in a Sheffield United machine that shows no sign of spluttering. Following a promising opening 15 minutes from the Blades, the Gunners came into the match and found the net via a close-range finish from Gabriel Martinelli on the stroke of half-time. Despite some loose passing from Wilder’s men, Fleck continued to try and drive his side forward, showing his lovely ability to drop his shoulder and beat a man on a number of occasions.

For the Blades only Enda Stevens – who was also brilliant at the Emirates Stadium – matched or bettered the 28-year-old for successful tackles and dribbles. And it was Fleck who popped up in the 83rd minute with the equaliser. His strike into the deck bounced up and over Bernd Leno and into the net to give United a deserved share of the spoils, even if Wilder wasn’t happy with their performance. That took Fleck’s tally to a career-best five goals in a season while he has provided two assists for team-mates too.

Many opposition supporters have described their own team’s performances against the Blades this season as an ‘off day’. Understandably, some fans of other Premier League clubs will have been expecting to beat a newly-promoted outfit. Soon though, with players like Fleck in their ranks, they may have to accept that Sheffield United are actually a bloody good group of players led by the manager of the season.