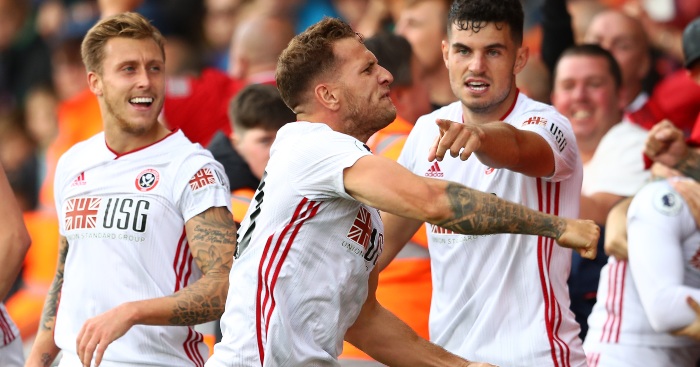 One of the themes of the week has been idle punditry and that was the backdrop to Sheffield United’s opening Premier League game with Bournemouth.

Yes, you know Sheffield United – that gritty and obdurate cliche from Beyond The Wall, where they all subsist on gruel, 4-4-2 and long diagonals into the penalty box. Just how will Brian Deane and John Pemberton fare in this evolved world? And what of plucky coach Chris Wilder, who still writes his teams on the back of a cigarette packet and conditions his players with medicine balls and hours of running up stadium steps.

The more interesting – and sensible – aspect of Sheffield United’s bid for survival, is that they do not conform to the assumed ‘right’ way of meeting that challenge. Wilder is very much an outlier in that sense. His three centre-back system – overlapping centre-backs no less – displaces his defence in a way which will frighten the traditionalists. Static and stable is supposed to be the virtue, not modern fluidity.

Perhaps that was Danny Mills’ undoing? He couldn’t get beyond the regional associations of course – or even open a laptop – but Wilder’s United are not typical. Newly promoted clubs have attempted to play their way to safety before, but usually under the instruction of cosmopolitan types with whitened teeth, rather than coaches who grew up patrolling the sidelines at Bramall Lane and cut their teeth in non-league football.

But here were are; is this going to work? Well yes, maybe it will.

Ironically, in spite of talk of United’s style, they nearly took the lead inside 60 seconds from a long ball. David McGoldrick ran in behind Chris Mepham and forced a good parry from debutant ‘keeper Aaron Ramsdale.

Bournemouth are a useful opponent to face. They’re the kind of side, particularly at home, who have to be beaten. Given their proficiency on the counter-attack, they also provide an examination of an opponent’s balance, so it was testament to United’s deeper texture that they didn’t expose themselves in the first half. Despite all the opening-day eagerness and adrenaline, their moves forward were well-paced and properly buttressed. They were ambitious, not reckless.

Those centre-halves have attracted a lot of attention for what they allow with the ball, but that’s probably at the cost of their more rudimentary attributes. Chris Basham is certainly wirey, but in John Egan and Jack O’Connell they have a pair of nightclub bouncers – footballers, but with whom you’d feel safe wandering through the wrong part of town. Egan especially was quite outstanding. His interventions were fine enough, but he almost quarterbacks the defence, co-ordinating who goes forward and when, barking at the midfielders ahead who need to drop in and cover the resulting space.

One of the early symptoms of good health after promotion is expression. In the opening weeks, if a side is willing to commit bodies to the attack and exert pressure, that’s usually taken as a positive indicator. It’s not wrong, but it ignores the breadth of the issue. The actual virtue is competence in all of the different phases and, obviously, that’s where Norwich City fell down at Anfield on Friday night.

They may have attacked nicely enough, but attacking is easy. Where the league is difficult, where it hurts, is in midfield and defence and, increasingly, also in transition. Good footballers produce nice moments, but good teams produce those highlights from a foundation of a stability.

Are their exits up the pitch smart and productive? Can they hold possession in midfield, using it to ask questions whilst still staying safe?

On this evidence, Sheffield United can.

It was telling that the usual tenets were largely missing from Bournemouth’s game. Ryan Fraser, usually such a dangerous, slashing presence from deep, was kept quiet. The Josh King-Callum Wilson axis, the root of so much of what they do well, was also broken up efficiently. The hosts took the lead early in the second half, when Mepham hacked in a loose ball after a corner, but that didn’t create any superiority.

Instead, Sheffield United showed their best – everything that we’d heard so much about. There were the wing-backs, creating those overloads in wide positions. There was Oliver Norwood’s delivery from that shallow left channel. And there, sporadically, was Basham, pushing forward from deep to take part in neat little exchanges and helping to create crossing positions.

Finally, in the very last minute of normal time, there was the set-piece design. United loaded the box, Bournemouth fell for the misdirection, and George Baldock was pushed to the byline and into yards of space. His cross bounced and bobbled in the six yard box and Billy Sharp, as he has made a career of doing, reacted quickest to stab in an equaliser and spark a wild uninhibited celebration over in the far corner.

They deserved it. This was not the day to judge Bournemouth, because Eddie Howe was without all but one of his new signings and this was probably not the side he planned on playing. David Brooks is still many weeks away, Lloyd Kelly too. But that’s not really the point; we know what Bournemouth are already and we can have a good guess at what they’ll be later in the season.

Sheffield United we don’t know, but we can certainly feel better about them now. The supporters who travelled down on Saturday morning will be happy with the point. They’ll be more encouraged by the day’s reassurance, though, and that might be more valuable. Their side created the better chances. They also played the better football. It’s very early and there all sorts of unseen variables which can define the tone of a season, but on this evidence, quite to their credit, they are everything they’re assumed not to be.

Seb Stafford-Bloor at the Vitality Stadium – he’s also on Twitter.