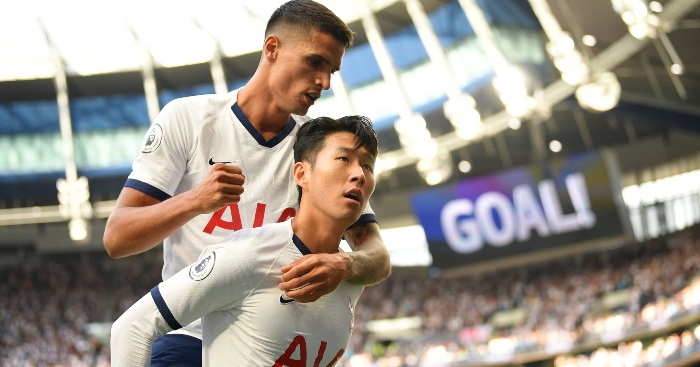 So the transfer window has shut, the rumours are on hiatus and, for now, Mauricio Pochettino has reason to be slightly happier. One of the theories around these parts has always been that Tottenham draw their energy from their head-coach. When he’s off-colour, they are too and, while a bit simplistic, that would help to explain the strange tone of their season so far.

Prior to the international break, the first north London derby of the year brought a good result, even if the performance never quite matched. It may have just about kept Arsenal at bay, but it wasn’t sufficiently cleansing to purge the memory of Spurs’ flaccid performance against Newcastle.

Convenient, then, that Crystal Palace brought a very similar strategy to White Hart Lane. Sit deep, pack the middle, hope for chances on the break; it’s not quite Tottenham’s kryptonite, but it is becoming an irritatingly consistent way of sugaring their gas tanks.

But this was the catharsis. It wasn’t just a win at home and – finally – a performance befitting their new stadium, it was full of all Tottenham lost signatures which, in their absence, have been such cause for concern.

Because that’s been the mood at White Hart Lane. There’s been no crisis and no cause to burn shirts or cut-up season tickets, but there have been regular signs of a minor, vague ailment. In Pochettino’s press conferences, but also his demeanour during games, when he has sat passively and – at times – in a state of disinterest.

It’s shown in the players, too. They’ve moved in the same way and appeared in their familiar positions, but rarely with the proper effect. Tentative, unsure, uncommitted; however that collective malaise is described, it’s manifested in patchy performances, full of errors and lapses in concentration, and without the hallmark intensity which Pochettino’s teams carry. They’ve been a washed-out colour of a football team.

Here that colour returned. In really striking, bright fashion. For the first time in months, a Tottenham first half was characterised by a tremendous surge of power. When Son Heung Min gave them the lead, Pochettino sprung from his seat in the dugout, pumping his fists like he meant it. It set the tone; everyone was engaged, nobody’s mind was on anything else.

Then, a second goal. Serge Aurier burst into position down the right and his driven cross was turned past David Guaita by Patrick van Aanholt. An overlapping full-back attacking space. Drilling the ball into the box instead of just dropping it in and hoping for the best. These are the small details which have been missing and they were everywhere. In the slick exchanges in midfield, in the way Palace’s fragility was explored with real relish, and in the pressure on the ball.

Perhaps even in Tottenham’s appetite as well. Not their literal effort or application, but their desire to exert themselves on an opposition and to play with a flourish rather than just collect points. They enjoyed themselves today and, clearly, that hasn’t been the case for a really long time.

4 – This was Spurs’ joint-biggest victory in a London derby in the Premier League (seventh win by four goals), having last won one by four goals in what was Mauricio Pochettino’s first home game in charge of Spurs (4-0 v QPR in August 2014). Fantastic. pic.twitter.com/kshwWIwgV7

In fact, it was reminiscent of the powerful punches this team used to throw at White Hart Lane, during that final season when teams would be blasted away inside half-an-hour and when invariably, the final hours of games were played out sunny celebration.

On Saturday, 2-0 became three, then four. At their best, these players have a wonderful cohesion and twice, with Palace caught upfield, Spurs constructed wickedly quick moves to punish them. The first, pivoting around Erik Lamela, then Christian Eriksen, then Harry Winks and Serge Aurier, left Son to crash a volley in at the far-post. The second saw Lamela left alone in exactly the same position, free to slide and steer-in Harry Kane’s cross.

Until today, that was the kind of Tottenham football that could only be found in the old YouTube compilations. With Kyle Walker and Moussa Dembele and those awful, awful Eurodance soundtracks. Here it was again, though, reappearing during a half of the utmost quality. And it was fun. In the sense that it looked like it would be enjoyable to play in that team and be a part of those flowing moves.

When was the last time anybody could say that? Not for a long time in the Premier League and, fun as it was, not really during the chaosball phase of last season’s Champions League.

Obviously, a comfortable win over a flatly awful Crystal Palace can’t be used as any sort of indicator. Tottenham aren’t back, they’re not on the march, they’re not about to contend for one trophy or another. But they were good today and they were free. For too long, they’ve been inhibited by something – by an approaching European game, their squad limitations, injuries, or – as most recently – uncertainty over their players’ futures.

Pochettino was right. Sealed off from those issues, everything looks and feels so much better.