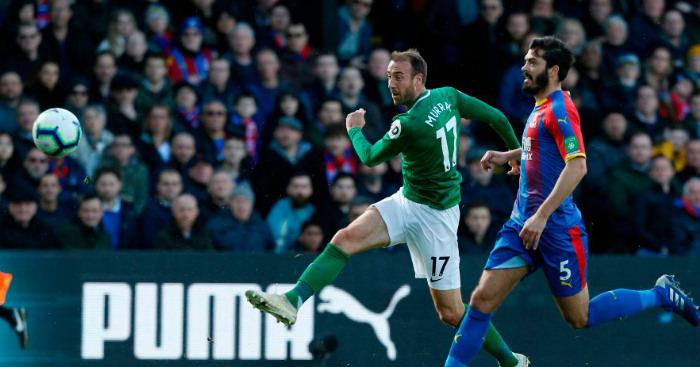 Glenn Murray has made a career from his incredible knack for making the most of his opportunities, so nobody should have been surprised that he was the man who gave Brighton the lead 20 minutes into a game he wasn’t even supposed to start.

Florin Andone was on the teamsheet for English football’s strangest derby. Murray’s omission was the only change from Brighton’s 1-0 win over Huddersfield last week, but an injury to Andone in the warm-up meant Murray was bumped into the starting eleven.

This was a huge game for Brighton, not only because they were away to their fiercest rivals, but because their recent form had had them looking nervously over their shoulders at the relegation zone.

Brighton were our early loser a week and a half ago, particularly for Hughton’s over-reliance on the players that got his side promoted in favour of the talented new signings who have joined them since they came up to the Premier League.

With this victory, however, Brighton have now won back-to-back league games for the first time since the beginning of December – against the same two opponents, no less. When the final whistle rang out around Selhurst Park, they sat eight points clear of the relegation zone, with three other teams between them and the drop zone.

While we stand by our earlier assessment – they had not won a league game for two months at the time, and they have spent a lot of money on players they’ve largely not played – we will admit that the fact that Murray and Anthony Knockaert were the two men on the team sheet and Lewis Dunk took the man of the match award certainly cocked a snook to us.

Murray, in particular, is dazzling in his longevity. He was already 32 when he rejoined Brighton from rivals Palace to aid their promotion campaign in the summer of 2016, and now, nearly three years later, he is still Brighton’s most reliable goalscorer.

There is almost nobody else in the division you would rather have running onto Dunk’s high, long, bouncing ball over the top that James Tomkins failed to deal with. His half-volley from just inside the box was placed precisely into the far bottom corner – his 100th league goal for the club across two spells, interrupted by a period when he called this ground home.

If he had been at this stage of his career five years ago, he might have found himself earning a late-career England call-up, like the ones Kevin Davies and Rickie Lambert received, the latter even making the squad for the 2014 World Cup. England fans will rightly rejoice that those desperate days are over – for now, at least – but Murray would also be justified in cursing his bad luck. Harry Kane and Raheem Sterling are the only Englishmen with more Premier League goals this season.

Having scored 14 in all competitions last season and 13 so far this campaign, he would likely need just one more year to hit those tallies; a contract extension signed in November gives Murray that time. Now, as ever, all he needs is the opportunity.