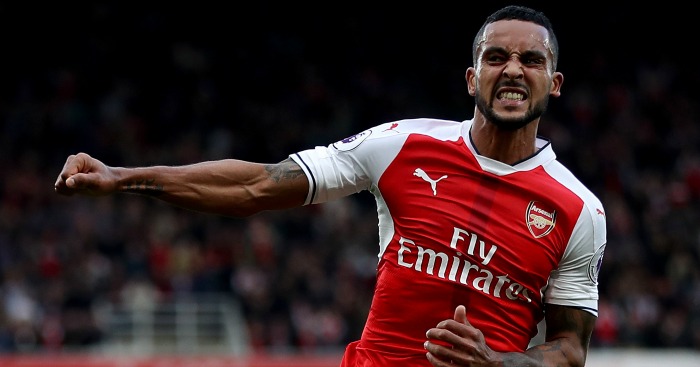 Theo Walcott has managed exactly five league goals in each of his last three seasons at Arsenal; few predicted that a move back to the right wing would precipitate that total being equalled in his first 700 minutes of 2016/17. The pre-season announcement that Walcott was no longer a striker was met with the predictable joke that most people had forgotten that he still was. Walcott is laughing loudest now.

We’ve spent much of the past fortnight tearing out our hair about Walcott’s very annoying England habit of actively reducing his impact by staying close to his marker and thus not demanding the ball. It leaves him as a passenger for far too much of far too many international games, and the contrast with Andros Townsend against Slovenia was embarrassing.

Yet at club level, Walcott is flying. His brace against Swansea was, slightly ridiculously, only the eighth time Walcott has scored more than one goal in a Premier League game, but this was that most pleasing of sights: Walcott being aggressive rather than passive. Not in terms of behaviour – Walcott will always have the demeanour of a boy your mother would be happy to invite for tea – but in terms of desire.

That aggression is best illustrated by looking at Walcott’s match statistics. It is extremely rare that Walcott has almost 40% of Arsenal’s shots, 50% of their shots on target. I wrote here how the presence of Alexis Sanchez rather than a traditional centre-forward has increased Walcott’s impact, and that again proved the case against Swansea. Had Olivier Giroud started, would Walcott have even found himself in such positions? Would he have been so dominant?

There is an accusation that Walcott is a ‘sunshine’ goalscorer, one who makes hay in dominant victories over poor teams. Before Saturday, 16% of his league goals for Arsenal had come in three wins over West Brom (a dead-rubber 4-1 on the final day of 2014/15), Newcastle (7-3) and Blackpool (6-0). This season he has scored against Chelsea, Liverpool and won three vital points on Saturday.

There is an archetypal Theo Walcott goal. He hangs on the right side of the penalty area as Arsenal pass it around the edge of the penalty area, waiting for the left-back to get sucked infield towards the ball. When that happens Walcott calls for and receives the ball to feet, advancing slightly before shooting. The shot is low and across the goalkeeper, exactly as you were coached as a child. Some hit the post and rebound in, some squirm under the goalkeeper and the rest go somewhere in between. Romario has the toe poke, Francesco Totti has his cucchiao, Walcott has this.

The two goals against Swansea were different. Walcott wasn’t in the same place at the same time but the right place at the right time, edging in front of Jordi Amat to stab home the first goal and finding himself unmarked in the six-yard box for the second. Call it good fortune if you like, but that would be uncharitable in the extreme. Walcott demonstrated – and perhaps the phrase should be whispered because it feels so out of place – a predatory instinct in front of goal.

Arsene Wenger puts Walcott’s improvement down to a mental resilience that has been lacking in previous incarnations of his winger/striker/wide forward/wherever there is the least competition in Arsenal’s squad.

“I would cut the ‘little’ bit off in your sentence and just say he’s much more resilient, and not a little bit,” Wenger said after the victory.”He could have had a hat-trick, or even four, but he scored two goals. I think he’s got seven now, that’s quite encouraging.”

Walcott himself credits an increase in competition for places at the Emirates, but the explanation is far less important than the result. If Arsenal’s false nine formation is to be successful, the front four must share the goals. For the first time in years, Walcott is more than pulling his weight.