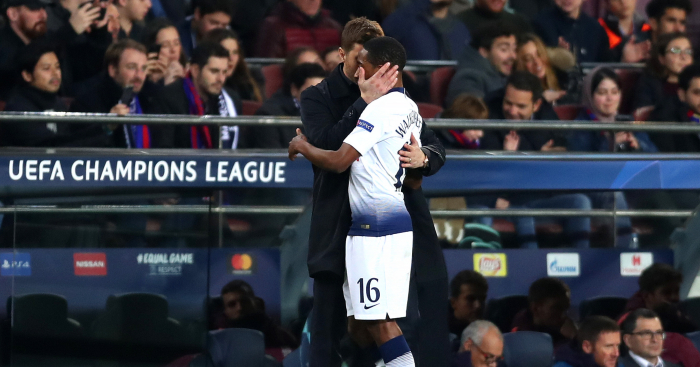 The one criticism that even doe-eyed Tottenham fans often level at Mauricio Pochettino is that he is not decisive enough with his substitutions. The changes come too late or too predictable, with Son Heung-min, Lucas Moura and Erik Lamela in a never-ending dance-off to earn the right to play in the same orbit as Harry Kane.

But Tuesday was different. On Tuesday Pochettino was positive not just with his initial team selection but with his substitutions, acting just after the hour when Tottenham’s verve and industry were threatening to ebb away to nought in the Nou Camp. The rookie right-back came off, the no-longer-surprisingly-excellent Moussa Sissoko took over the whole of that flank and Lamela came off the bench to take up a position behind Kane. His impact was immediate, the Barcelona defence struggling to cope with an attacking quintet of him, Kane, Son, the exceptional Christian Eriksen and the rejuvenated Dele Alli.

Not content with dominating both ball and territory, Pochettino acted again, bringing on Moura for Son, whose finishing we are contractually obliged to note had ‘let him down’. And then he acted again, bringing off Harry Winks to flood the Barcelona area with attacking players. Three positive, proactive changes that were rewarded with a famous draw and progress against all the odds they had stacked against themselves in the first half of this Champions League campaign.

The excellent decision-making had actually begun on Saturday night, when Pochettino elected to face Leicester without Kane and Eriksen. A truly impressive away win was delivered, with Alli revelling in the star billing their absence afforded him. His confidence is clearly regenerating by the day, while both Kane and Eriksen were fresh and magnificent in the Nou Camp after their bit-part role in the East Midlands. This was squad management at its finest.

Then came Tuesday and a starting line-up that screamed ambition. The idea that Spurs would start in the Nou Camp without Eric Dier would have previously seemed preposterous, but Pochettino did not want an auxiliary defender; he wanted control and creativity. He even resisted any urge to draft in Dier at right-back, showing faith in Kyle Walker-Peters in a move that had the potential to be his only mistake after seven minutes.

But Walker-Peters recovered and so did Tottenham, who ended the game with more possession and more shots than Barcelona, a feat which will never be less than impressive even when the Spanish side rest players. When the goal eventually came from Moura – finishing off a move that began with Danny Rose at left-back – it was absolutely deserved. Not least by Pochettino for his sustained bravery of selection.

10 mins after full-time, Pochettino re-emerges & strides across the pitch. Looks up to the #thfc fans, applauds them and the noise is absolutely deafening. What a manager. His changes, his instilling of belief, driving Spurs onwards & upwards. Huge result for Poch & Spurs #BARTOT

What a truly phenomenal job this man is doing at this football club, defying all assumptions about investment to produce a team that consistently overachieves. Some will not acknowledge his brilliance until he has won a trophy, but nights like these add to a growing stack of evidence that he is destined for great things, with or without these Tottenham players. In Barcelona, when his decision-making directly led to glory, one of the few remaining doubts was removed.