Nobody saw that coming. Yaya Toure's fire might be dwindling, but he still has more than a spark... 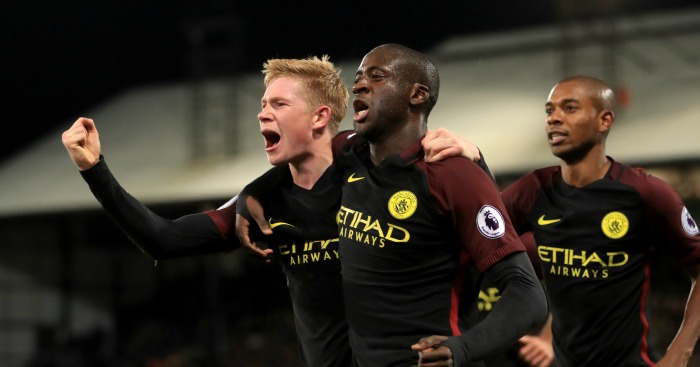 Pep Guardiola has played a blinder. Manchester City’s manager received criticism in some quarters for his extradition of Joe Hart to Turin, and his hardline stance with Yaya Toure and his agent made a return to City’s side seem equally unlikely. Yet Guardiola dug in his heels and refused to budge against a tide of public questioning from Dmitri Seluk. Saturday proves that the manager won the battle and the war of words.

Before this weekend, Toure’s only club appearance this season came in the effective dead rubber at home to Steaua Bucharest in August. Guilty of allowing his fitness to slip during the course of last season, the Ivorian was a shred of his former self. Gone was the drive, the vigour, the quality on the ball, the hunger, the shooting ability; none looked like they would return. After Seluk claimed Guardiola “only wants players who are scared of him”, Toure’s Manchester City career was trampled underfoot. The comparative backwaters of the Chinese Super League and MLS were predictably touted as likely January destinations.

Rather than cave in to Seluk’s public spat of verbal cat and mouse, Guardiola stuck to his principles. Once Toure had improved his fitness, he would be considered for selection. Once Seluk had swallowed pride and Imodium to deal with his verbal diarrhoea, Toure could become persona grata at the Etihad again.

Against Crystal Palace, Manchester City’s match-winner of the past jumped back into the present day and performed all of his classic hits for a still-adoring away crowd. With Guardiola resting players ahead of the crucial trip to Monchengladbach in midweek, Toure was given the opportunity to piece together a broken reputation. If Guardiola deserves praise for the method, Toure merits applause for the result.

Toure’s fire may be dwindling, but it still sends up the odd spark. He scored twice on his first league start since April 23, twice answering his team’s call for inspiration in avoiding a fourth draw in five league games. Rather than following three steps behind the game, as was the case last season, Toure set the pace and the example. Mischievous City supporters are keen to point out that he’s scored more league goals than Paul Pogba this season, despite playing just one game.

“Yaya was, for the last two months, training really well,” Guardiola said. “His physical condition is better than ever. I’m so happy for him and his family. He’s now a real part of the team and can help us achieve our targets. We need this kind of player. The Premier League, Champions League and Cups are so demanding.”

The switch in Guardiola’s mood is astonishing and, had it come without any change in behaviour from Toure, would be considered weak management. Yet Toure’s performance against Crystal Palace merited the praise. Player has met the demands of his manager, manager has praised player for doing so with enthusiasm; this is man-management expertise in action. A testing situation has been flipped on its head.

One hopes that he can remind his agent of that same advice, and we don’t lose a special player just yet.

Now 33, we will no longer see the Yaya Toure of old, the player who could dominate not just one but the majority of matches. Even his advancing years underplay his footballing age. Since joining City in 2010 at the age of 27, Toure has played over 330 games for club and country. Yet that hardly matters to City right now, with Kevin de Bruyne, Raheem Sterling and Leroy Sane providing quite enough counter-attacking potential for one team.

The Yaya Toure we cherished for five years might not be back for good, but at least he’s no longer gathering dust in the broom cupboard. Suddenly Manchester City’s enviable midfield options have increased even further.

Daniel has been nominated as Writer of the Year by the Football Supporters’ Federation. Please go here and vote for him.