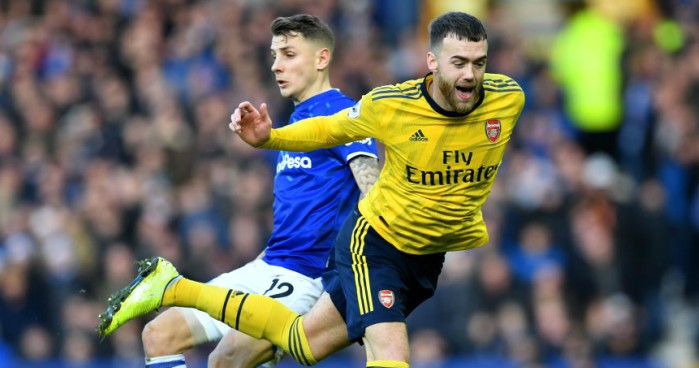 It was a rotten game with few heroes. But emerging from the wreckage of that awful Premier League match was a ridiculous Arsenal defence that had never before played together. A lifetime laughing stock, a twice-rejected former child genius and two callow wingers combined to produce Arsenal’s first clean sheet in 15 attempts. They can thank Everton for the absence of any real composure in the final third, but credit should also be awarded for some basic, mucky-knees, entirely uncharacteristic defensive work.

This was the youngest top-flight Arsenal XI for almost nine years and that certainly showed in the hesitancy and naivety of their attacking play, but it did not hamper their defence. They threw themselves into blocks, tackles and clearances; the sight of both Calum Chambers and Lucas Torreira diving full length to block the same Richarlison shot was a perfect illustration of that ‘thou shalt not pass’ attitude so often lacking in recent Arsenal teams. Having watched Everton out-tackle and out-battle Chelsea, they were determined not to cast themselves as the patsies at Goodison.

“We were ready for the challenge and to battle in the 50/50 duels. We wanted to earn it today,” said Chambers, named man of the match after 90 wholehearted minutes he described as a collective “great shift”. There is not a centre-half alive so does not relish a 0-0 and this was Arsenal’s first in the Premier League in over two years. The shift towards Mikel Arteta’s philosophy will begin this week but for now, showing desire and being brave were the priceless immeasurables.

“I wanted to see people that would run and fight for the team,” said Freddie Ljungberg, damning some of the club’s most experienced players in their absence. “We can’t rely on our name – we have to fight and do the dirty things.”

Arsenal did exactly that, actually out-tackling and out-fouling an Everton side that had already developed a reputation as dogs of war under Ferguson. They were determined not to be bullied, with Bukayo Saka in particular belying his 18 years to stand up to every challenge in an unfamiliar position. His performance entirely vindicated Ljungberg’s decision not to switch Ainsley Maitland-Niles and play Chambers at right-back, which would have robbed Arsenal of a very promising Chambers-Luiz partnership; bizarrely this was its first outing.

In an attacking sense, there was little of note, but that was a much improved showing from Arsenal. Defensively they were solid and Torreira and Xhaka provided a very good screen. Chambers excellent, as was Saka. Luiz very strong in the second half.

There is clearly much work to be done at Arsenal, and that will be no surprise to Arteta after he watched them at close quarters last weekend. But what he absolutely did not want to see at Goodison was an Arsenal side living up to every stereotype about them being soft and easily bullied by a physical, direct side. They passed this incredibly tiring, incredibly dull test.

They emerged with a clean sheet and they earned it.