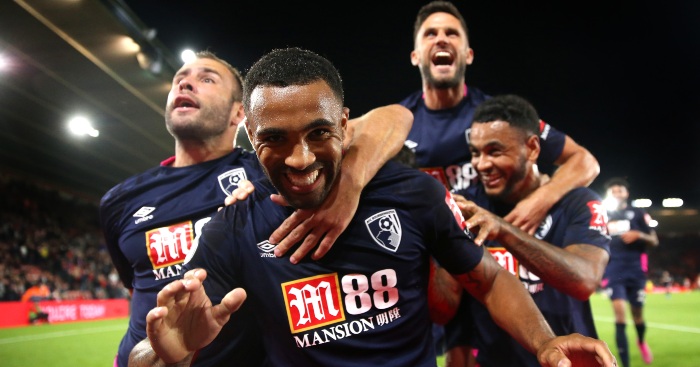 Bournemouth’s win over Southampton wasn’t without its asterisks. They had to survive some fairly heavy shelling during the game and, at different moments, clearer thinking and better finishing might have seen them lose their lead. Southampton certainly had their moments and there was good reason for the home crowd to be as engaged as they were.

But that’s a rather joyless appraisal of a side who, as of Friday night, sat third in the Premier League. It would also be to ignore the fabric of their win at St Mary’s and the nature of their gameplan. Bournemouth came to absorb and counter. They set traps and their host fell into them. That they conceded 26 shots was alarming, but only without the context of knowing that few of them posed any real threat.

The quality of defending in their own box was generally good, too. There may have been some errant positioning outside of it – Southampton were particularly productive down the right – but on the basis that this has been the club’s perennial weakness since arriving in the Premier League, it was all very encouraging. They were tougher through the middle, harder to cut through.

But the real success lies further forward. The partnership between Josh King and Callum Wilson is discussed fairly regularly, but perhaps in terms which fail to appreciate just how good they are. King in particular is probably undersold.

He isn’t English, which means that the interest in him will never be quite the same, but his movement is exceptional, as is his ability to progress the ball. He’s not really a forward, not really an attacking-midfielder. Instead, he’s a carrier – the thrust in transitional phases, the dose of intent which begins so many moves. He can either dovetail away while a counter develops through the middle of the pitch, stretching a defence as its scrambles to recover, or hold possession while the runners scatter around him.

Friday night’s win had those familiar patterns, but at the root of the second goal – the one which ultimately won the game – was Philip Billing. He’s fascinating. His size belies the fact that he’s a really good, technical player. The architecture behind that Harry Wilson goal also showed his vision and his ability to construct and complete elaborate attacking moves. It betrayed his ambition, too. A goal-up away from home, it was a surprise to see him chase a move that he began and push into the box. Maybe that was one of the issues with playing for Huddersfield? They were so limited and they became so afraid that, ultimately, someone like Billing was only able to show one side of his playing personality.

He might have had the occasional long shot or muscled another player off the ball, but the team’s situation was often so dire that there was little room for any expression.

16 – Since the start of last season, Callum Wilson has been directly involved in 16 goals away from home in the Premier League (11 goals, 5 assists), more than any other player. Effective. pic.twitter.com/RPHy9Z58RX

But now he’s another tool for Eddie Howe’s midfield and that’s an entirely different situation. Jefferson Lerma is the bluntest instrument in that shed, he’s a nasty, naughty player who gets right under an opposition’s skin. The returning Lewis Cook is more delicate. His rhythmic passing will be reintroduced gradually, but he’ll offer an interesting contrast; his injury has meant that he’s been forgotten about, but he’s still destined to become a very fine player and still likely to be capped again by England at some point.

Consider also that David Brooks is yet to come back into this side and that Lloyd Kelly, who completed an hour for the u23s earlier in the week, will soon be available for selection. Howe still has a relatively thin squad, but the variations within it are becoming more intriguing. Its limitations, too, are slowly beginning to recede.

Sometimes it appears as if Bournemouth’s definition was settled upon a long time ago. They came up, they passed the ball around and they conceded a lot of goals. That became their permanent identity. Much the same was true of Howe: we decided that we liked and admired him, that we found him forthright and honest, and then – maybe a year or two ago – stopped taking such an interest.

But a closer look shows an evolved Bournemouth. One which hasn’t strayed too far from its original ideals, but has still been broadened out and hardened while nobody was looking.