Home Brighton F365’s early winners: Brighton up where they belong… 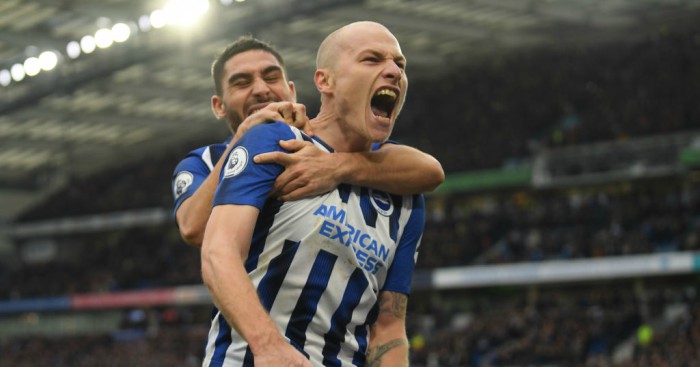 Everything but the table itself suggested that Brighton should be clear of relegation. More average possession than Leicester, Manchester United or Tottenham. A higher pass completion rate than the latter. An xG that put them in the bracket of Arsenal. A six-year contract handed to a baffled manager who was quick to point out that “we haven’t really done anything”.

In the other column: A record of just one win in eight games, an uncomfortable two-point gap to relegation and the naysayers pointing out that this new Brighton actually had fewer points than the old Brighton. What use possession if you cannot win football matches? Who wants to be Norwich with a big pile of moral victories but only a handful of points?

Brighton fans will tell you that the Seagulls have not been playing poorly, but statistically only Bournemouth had been in worse form over the last eight games. Defeat would have been devastating and a draw dispiriting; what actually transpired was a victory far more comfortable than the 2-0 scoreline. Two teams that started the day on the same points were in different stratospheres over 90 minutes.

From back to front, Brighton were superior, Yves Bissouma and Davy Propper protecting a defence that was actually quite self-sufficient. Then there was the supreme Aaron Mooy, handed the freedom of the pitch by Bournemouth’s formation but nonetheless brilliant, utterly controlling the game with Neal Maupay, Leandro Trossard and Ali Jahanbakhsh freely running into space in the knowledge that he would surely find them. If Mooy was half a yard quicker and had half a head of hair, he would undoubtedly be playing Champions League football.

Brighton had movement, penetration and vision. When your back seven keep a clean sheet and your back four all contribute either a goal or an assist, it has been a perfect day for any manager. Add the nerves of a flirting-with-relegation six-pointer and the performance and result are potentially season-changing.

Often left out of the conversations about British managers because he the most non-British of British managers, Potter has quietly done a phenomenal job in turning a squad of players schooled in low-possession, low-block football into a team far easier on the eye but who also remain dangerous from set-piece situations. Against Bournemouth they scored two wonderful goals – Mooy’s classy control and finish drawing deserved comparisons with Dennis Bergkamp – but they also have the height and delivery to score the ‘ugly’ way. That only champions-elect Liverpool can boast more Premier League goalscorers this season tells you everything about the versatility of this Brighton side.

Aaron Mooy being compared to Dennis Bergkamp. What a world. pic.twitter.com/gqpg1hODe3

But they undoubtedly needed to deliver a performance over a whole 90 minutes and they undoubtedly needed to deliver the points that would inevitably follow. Both came on Saturday and it was telling that Potter said that Brighton “had a good understanding of what we were trying to do”. Just half a season into his first season at the club and even the Seagulls’ fringe players understand his vision. And that will surely only get easier if they can establish themselves into the mid-table where they clearly belong.