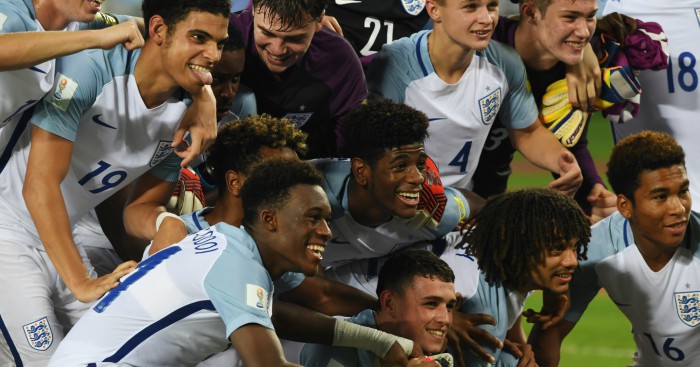 Mistrust is ingrained within us, to the extent that even a positive must be met with a wave of negativity. The Under-20s won the World Cup? Let’s see what the seniors do. The Under-19s won the European Championship? Shame about Gareth Southgate. The Under-17s scored five times in a World Cup final? Our best players will always let us down. Getting excited about English football’s future is the resort of the foolish or the naive.

That hardwired position is entirely understandable, for it has been sculpted and sealed by decades of failure. It is not the underachievement per se that erodes faith, but the cycle of hope and despair. Expect the worst, and anything else is a bonus. There are supporters of club teams across the land who are familiar with that emotional strategy.

Yet pessimism does a disservice to those who have achieved their dreams this year. There are young English players and experienced youth coaches who merit better than being tied to the failures of senior teams past and present and written off in the same manner.

When Marcus Rashford and Phil Foden recall that the first World Cup they remember was 2010, tarring them with the Golden Generation brush is ludicrous. It also highlights the public’s role in their development with England. Being constantly told that your success will do nothing to change the status quo does little for morale or motivation.

So, the happy and breaking news: this has been a record-breaking summer for England, a truly exceptional period of performance. Brazil and Spain have both won two major under-age tournaments in the same calendar year, but no country has ever before won three.

If the achievement in winning three major tournament finals is significant, the manner of victory overshadows even that. Maturity, composure and flair are not abstract nouns we associate with those playing with Three Lions on their chest.

The valid reason for negativity – or at least stunted optimism – are the worries about pathways for our young players. The financial might of the Premier League’s elite means that the clubs who are most likely to collect proficient young players are also the ones least likely to play them. Add in managerial impatience that promotes both conservatism with team selection and the purchase of established professionals, and English football has more roadblocks than any other country in the world.

Indeed, only three members of England’s Under-17 squad have so far been given first-team league minutes. One of those (Morgan Gibbs-White) plays in the Championship for Wolves and will now find opportunities limited after rapid Jorge Mendes-led investment, one (Angel Gomes) played two minutes for Manchester United on the final day of last season and the other, Jadon Sancho, left Manchester City to join Borussia Dortmund. Within weeks, Sancho had played three times the number of top-flight league minutes than the rest of the squad put together.

Yet even those valid concerns deserve to be given a positive spin. The success of 2017 at Under-17, Under-19 and Under-20 level has given those players the kudos to argue their case with evidence. Clubs cannot continue to claim that their players are not good enough to compete with their continental peers. If they are left on the shelf, the self-belief has been accrued to try their hand elsewhere, at home or abroad.

Most importantly, we must not be afraid to praise their achievement this summer for fear of piling pressure upon them. Nobody is saying that England have a generation of world-beaters, but to avoid celebration because of what has gone before is to take a knife to one’s own nose.

Success at youth level is not a guaranteed indicator of future success, but it is an indication of potential. Having never before enjoyed such a crop of successful, skilful and smart players across multiple age groups, no longer can the excuse of a lack of natural talent be valid. The only question now is one of opportunity. Nature has done its bit; now it’s time to nurture.