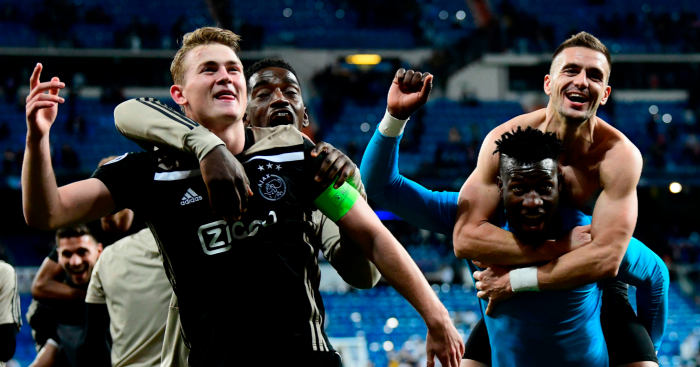 Matt Haig’s book How To Stop Time contains a beautiful passage on death, and losing those closest to us. ‘People you love never die,’ Haig writes. ‘Not completely. They live in your mind, the way they always lived inside you. You keep their light alive. If you remember them well enough, they can still guide you, like the shine of long-extinguished stars could guide ships in unfamiliar waters.’

In 2011, Johan Cruyff began an overhaul of Ajax’s youth system. Using coaches Ruben Longkind and Wim Jonk, Cruyff planned to change how his beloved club operated by going back to what he termed the ‘Ajax DNA’. At younger age groups, Cruyff believed that coaches had become transfixed with the prioritisation of winning matches rather than developing players. He believed in a return to the Totaalvoetbal principles that had once made Ajax great. The plan was to produce three players per season for the first team. I wholly recommend this piece by Adam Bate for Sky Sports on the details.

Unsurprisingly, Cruyff and his two disciples met strong resistance. In the climate of modern football, where the present is often considered more important than the future, there was a fear that ripping everything up was an extraordinary risk. Cruyff clashed with head coach Louis van Gaal and the fallout was incredibly acrimonious.

The return of Cruyff’s cancer in 2015 was a watershed moment. Jongkind and Jonk had lost their guide and their plan had lost its poster boy as Cruyff was forced to step back and fight his greatest fight. Having put their principles in place, Jongkind and Jonk left Ajax and formed their own brand under the name Team Jonk.

But they had done enough. They had planted the seeds and, in their absence, their vision has blossomed. Jongkind and Jonk sacrificed the present for the future. This is the first season that Ajax have made it beyond the Champions League group stages since 2006, and the first time that they have even competed in the Champions League proper since 2014.

Ajax did not just eliminate Real Madrid from the Champions League; they humbled them. They amassed 35 shots – 15 on target – over the two legs. When the going got tough, heading to the Bernabeu having lost at home, they stuck to their guns and outclassed the team that has won the last three European Cups. Some victories feel more significant than others. Some victories become lines in the sand that define an entire generation of a club.

Over those two legs, Ajax played Andre Onana, Matthijs de Ligt, Noussair Mazraoui, Frenkie de Jong, Donny Van de Beek, David Neres, Kasper Dolberg and Dani de Wit. Every single one of those players is aged 22 or under. This is Cruyff’s vision come to life. This is Cruyff’s vision vindicated a thousand times over. “Why couldn’t you beat a richer club?” as he famously asked. “I’ve never seen a bag of money score a goal.”

Ajax will lose players this summer. Frenkie de Jong’s move to Barcelona has been confirmed and Max Wober is already on loan to Sevilla in a move that will be made permanent in June. But selling players for huge profit is not part of the problem but part of the cure. Stay true to their principles and maintain their coaching standards, and there will be more to step into their shoes. Cruyff’s plan was never to create an Ajax team that reached the quarter-finals of the European Cup once, but to implement a system that allowed Ajax to consistently punch above their weight season after season.

In doing so, he will never die. Cruyff lives in their minds, the way he always lived inside them. They keep his light alive.