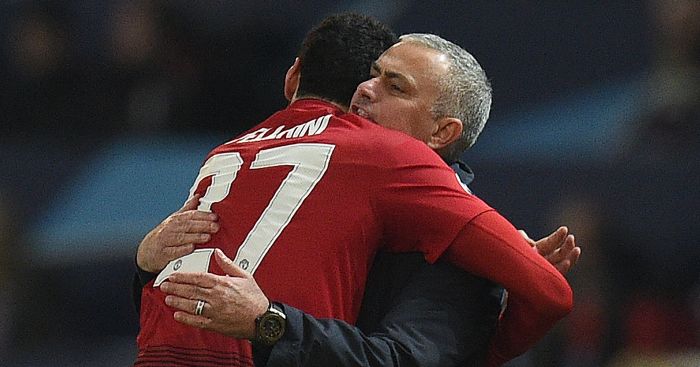 They won! They scored a goal at home! They kept a clean sheet! Halle-f***ing-lujah!

And if not fun, then at least effective. Everybody signed the waiver on Mourinho’s appointment; they would sacrifice the dream of attacking football for trophies. They would embrace their rightful status as despised and envied serial winners. Nobody signed up for despised and pitied; that really is the very worst of all combinations.

“I thought they were awful tonight,” said Paul Scholes. Correct. Rio Ferdinand – a more reluctant critic of this Manchester United side – added that “they got the job done” and that really is the only positive to be extracted from such a night. But it’s a pretty big positive for a team currently sitting seventh in the Premier League. And despite what some would have you believe, that seventh place is not a false position. They are not better than Everton. And it will take something akin to a miracle to see them qualify for the Champions League now.

Should this collection of expensive, previously successful footballers be struggling so painfully in the Premier League? Absolutely not. And the blame for that lies on the shoulders of many, not just the man on the touchline starring in his own particular car crash TV show. But that painful struggle has somehow not prevented them from advancing to the last 16 with a game to spare in the Champions League. And Mourinho was right to celebrate, and incredibly predictable to draw attention to his own record of 14 qualifications for the knock-out stages from 14 attempts.

This is no turning point – they missed that opportunity with the 3-2 win over Newcastle that really could have been a watershed moment – but it is a step forward, over a bar that has been set incredibly low over the last few months. They are winners, and being winners saves them the scenario of going to Valencia needing to avoid defeat. It keeps this competition alive into 2019 and it probably keeps Mourinho safe well into 2019. While there is 40/1 hope of Champions League triumph and thus qualification, he retains his job. That is the reality.

Did we learn anything about United on Tuesday night that we did not already know? Did any United player emerge from that game with their standing enhanced? You could make a case for Phil Jones but history tells us that renaissance will be followed by injury, to be followed by renaissance. No, this was a terrible performance that ended in victory. And ultimately, that’s what United signed up for. They just expected it on a slightly larger scale.