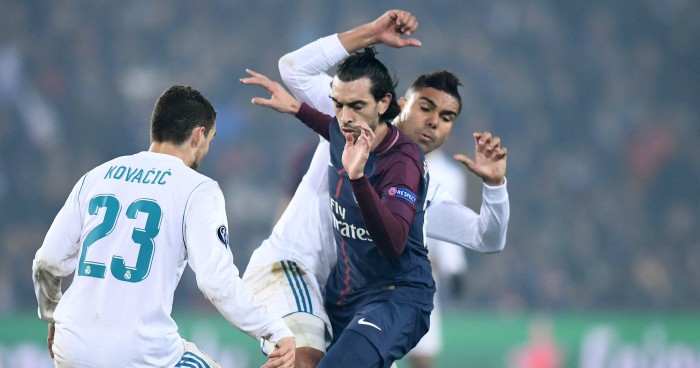 A year ago this week, Real Madrid claimed a place in the quarter-finals of the Champions League with a 3-1 win over Napoli; they had just two players in their starting line-up aged 26 or under.

On Tuesday night, Real Madrid claimed a place in the quarter-finals of the Champions League with a 2-1 win over PSG; they had six players in their starting line-up aged 26 or under, including the entirety of their four-man midfield.

Some called their line-up ‘weakened’ without Toni Kroos, Luka Modric or Gareth Bale. In reality, they were more energetic, more tenacious and more disciplined. Weakened? They were harder, better, faster, stronger and PSG looked pallid and pedestrian in comparison.

For a Real Madrid side to make 38 tackles is nothing short of phenomenal; they average slightly less than half that number per game in La Liga. This was the perfect away performance to claim a monumental season-saving victory and it absolutely would not have been possible without the energy, enthusiasm and teamwork of Lucas Vazquez (26), Casemiro (26), Mateo Kovacic (23) and Marco Asensio (22). It now seems ridiculous that only one of that supremely talented quartet can claim to be regular first choice.

Kovacic, 23, balling in a 2 man midfield against a tough European opposition away from home gives us an idea about his ceiling and the inevitable midfield monster he is going to be at the age of 28-29.

Now we see why Madrid fans and journalists have long been asking when Vazquez, Asensio and Kovacic will be seen by the club as more than mere fringe players, especially as fingers have been burned by the summer exit of the unappreciated Alvaro Morata. Nobody wants to leave Real Madrid, but for every player there is a breaking point.

Just two weeks ago – when all those young players started in a 3-1 win over Leganes – the post-match press conference was dominated by questions about the not-quites of Madrid. In a season when so many established players have fluttered and flattered to deceive, was it not time to put a few more eggs in a newer basket?

“I think they have always been important for me,” said a slightly prickly Zinedine Zidane. “There are a group of 25 players here, they know it’s difficult. What matters is that they are very good and they show that when they have to play.”

‘When they have to play’ is an interesting phrase and revealed rather too much about the Frenchman’s attitude towards his less-vaunted players. Just two weeks later, there has clearly been a shift; for the trip to Paris, Zidane did not rush back the almost-fit Kroos or Modric, and had no hesitation in relegating Bale to the bench. He needed robustness and stamina as well as dynamism; this was a job for the young men. They absolutely did not disappoint.

It was the tenacity and then the vision of Asensio that created Cristiano Ronaldo’s opener, though the assist belonged to Vazquez. Nobody should be surprised, as the Spaniard’s per-90 statistics show that he creates more chances than any of his Madrid teammates. Meanwhile, Kovacic was exactly as all-round brilliant as you would expect from a footballer who only trails Casemiro for tackles and leads the Madrid dribble charts by a country mile. Those three players have made 13, 10 and five starts in La Liga this season.

“They had the ball more than us but we were very aggressive, everybody was running, and when we’re like this it’s difficult to beat us,” said Kovacic, who is now unbeaten in 17 Champions League games for Real Madrid. Will Zidane allow them to play ‘like this’ again, even if it means leaving big names on the bench? Will he have a choice after that performance?