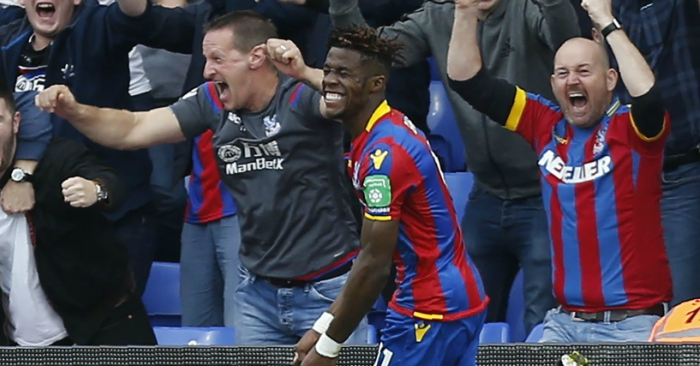 The team-sheet ahead of their clash with champions Chelsea was perhaps the most positive thing Crystal Palace fans have seen all season. The visitors were shorn of two of their most influential stars, but even more tantalising were the names at the start and end of Roy Hodgson’s selection.

Despite the rare surge of optimism that the sight of Wilfried Zaha’s name gave the home fans, few expected much from this London derby. Especially when the return of their talisman came with a warning from Roy Hodgson.

“Palace fans will feel more comfortable now he is back, believing he is the type of player who can change a game,” said the new manager. “But I would urge fans to give him the benefit of the doubt in his first game back, so to expect him to be in the form he was in before he was injured is a tough ask.

“We have to be careful here. There is a big psychological factor coming back in, but it would be wrong to put too much pressure on him.”

Hodgson’s tone was typically circumspect but the home fans who ignored their manager’s caution were right to do so. The forward was outstanding, particularly in the first half, taking the game to Chelsea in a fashion no-one else in Hodgson’s squad can. Playing as a centre-forward, similarly to how he tore Chelsea apart at Stamford Bridge last season, but this time without the help of Christian Benteke, the Ivory Coast star’s winning goal capped a display which epitomised the quality and spirit Palace have not been able to call upon since the opening day of the season.

There were signs of rust – a second-half chance disappeared after the forward dallied – but the Palace academy product was a simple, straightforward choice for the man of the match award. Even when he tired, which showed in the final quarter, Hodgson opted to freshen up elsewhere, with Jeffrey Schlupp, Yohan Cabaye and James McArthur ahead of Zaha in the line for a breather.

Palace fans were also cheered by the sight of Julian Speroni in their goal. While Wayne Hennessey has suffered simply for not being Speroni, the Wales keeper has never really convinced many of the Selhurst Park faithful, who have been calling for the return of the 38-year-old with every passing mistake by the current No.1. They got their way due to a knock Hennessey sustained on international duty, and the cult hero fielded everything thrown at him on his first Premier League appearance since the final day of the 2015/16 season.

Ahead of Speroni, Mamadou Sakho was typically strong while Scott Dann turned in one of his best Palace performances for some time as Chelsea toiled. The fact Palace resembled something like a cohesive unit must be down in part to the fortnight Hodgson has had on the training ground with his players who were not away on international duty.

But for all Palace’s solidity and character, it was Zaha who made the difference. “I’m so tired,” he proclaimed upon the final whistle but as he gets fitter and sharper, Zaha will prove to be the talisman Hodgson needs to help him carry Palace up the table.