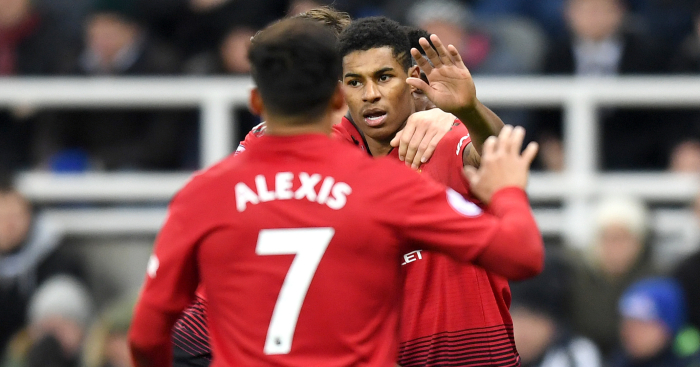 To credit Ole Gunnar Solskjaer for making an inspired substitution would be a tad generous, as tempting as it is to trot down the narrative road of ‘super sub makes super sub’. It does not take a genius to work out that a game dying on its arse at 0-0 could be improved by the introduction of a £75m striker and an outrageously talented street-fighter waking up after a year-long hibernation.

So when United were struggling to break down dogged opposition for the first time under the Norwegian and he looks to his bench, he does not see a row of expensive but dispirited players who are wondering if they will ever be in favour again, but a row of potential game-changers who are desperate to be a part of another victory and the celebrations rather than recriminations that will follow. This is now a team of many merry men rather than one man and his ever-dwindling band of favourites, publicly and privately shaming those who were not on his side. Now there really is only one side.

There will be those who question the professionalism of those players who were clearly not as motivated a month ago – surely they should have been playing for the shirt, the fans, the club? – but the change has been so stark that it is impossible not to conclude that the working environment at the club had become intolerable. Whatever happened at United over the last 12 months somehow transcended the potential of these players. A switch has been flicked, frowns have turned upside down and a zillion other cliches that basically mean that United now look like they belong in a reconvened Big Six rather than the mid-table muddle. Not only in terms of results and performances but in that intoxicating sense of inevitability when elite players are in full flow.

When Marcus Rashford made it 2-0, it was from one of those devastating counter-attacks reminiscent of those days when you wondered whether it was ever sensible to push your defenders up for a corner against United. Which is exactly how an attack featuring Paul Pogba, Rashford, Lukaku and Sanchez should look. They should be able to devastate teams. And Solskjaer was absolutely right earlier this week when he was giddy at the prospect of Sanchez joining a side that is being encouraged to move, to combine, to flow. He was the wrong man for Jose Mourinho’s United but he could yet be exactly the right man for this one.

This victory over Newcastle was far from easy – and United’s very vulnerable right side was certainly exposed – but it seemed inconceivable that United would not eventually score, that none of Lukaku, Sanchez or Lingard would make an impact from the bench. For the first time in too long, United genuinely look somewhere close to the sum of their parts. That’s a £75m striker on the bench and not a £75m flop. And he’s sitting next to one of this decade’s most talented Premier League players, not a £500,000-a-week wage drain.

We still do not know if Solskjaer is an excellent football manager or just a very lucky man who has been handed the cushiest job in the world – taking over a supremely talented squad that could be improved with little more than a smile, hug and the reassurance that mistakes will not be punished – but right now it really does not matter to millions of fans around the world or a group of footballers who are United once again.