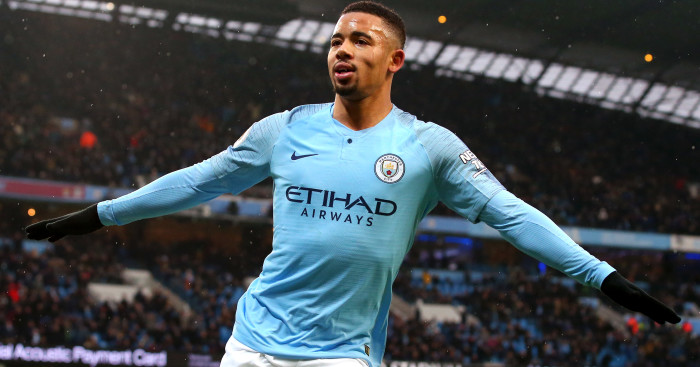 With the slide-rule pass into Gabriel Jesus, who converted in the Premier League for the first time in four months, Leroy Sane became the seventh player this season to click past 12 combined goals and assists. That he is the third Manchester City player in that magnificent seven indicates just how difficult it will be to wrench the title from this truly remarkable side.

And if that is not indication enough, take a look at a City bench that cost £180m. It’s understandably difficult to feel any sympathy for City, but they did face (and lose to) Chelsea last week without either Sergio Aguero or Kevin De Bruyne. Both returned on Saturday lunchtime alongside John Stones and Raheem Sterling to form the bulk of an almost laughably strong bench.

Not that City really needed that bench as they found it so very easy to ping the ball around an Everton side that always looked uncomfortable a) with a three-man defence and b) without Idrissa Gueye. A central midfield of Andre Gomes and Gylfi Sigurdsson were understandably little match for the speed of thought and feet of Fernandinho, Bernardo Silva and the excellent and underrated Ilkay Gundogan. City had around 70% possession in that first half and it looked like more.

The second half was barely five minutes old when the same combination brought a second goal. The assist from Sane, the goal from Jesus, the sighs from everybody who thought that City’s defeat to Chelsea could possibly be the start of some kind of crisis. This team does not do crises; the last time they dropped points in consecutive games was April 2017; the last time they lost consecutive Premier League games was over two years ago.

No player has created more Premier League goals since the start of last season than Sane. Nobody. Not Eden Hazard. Not Christian Eriksen. Not David Silva. And yet you would find precious few people who would put Sane in a list of the five most important players in that City squad. How can that combination even be possible? How can we work out that Sane has the most Premier League assists in 2018 and still hesitate to put him in our top ten players of the calendar year? Because this City squad is so extraordinary that even remarkable feats reek of ordinary.

Everton had the audacity to score a goal so Pep Guardiola simply took off Sane and brought on Sterling. Two minutes later they had their two-goal cushion again, with Sterling nonchalantly joining Hazard on 15 goals and assists for the season with a simple header made by Fernandinho and some particularly lax Everton defending. “Raheem Sterling, he’s top of the league,” sang the City fans. Damn right.

That we now expect City to remain untested and unbeaten until they face Liverpool in January is not even close to being a brave call. With De Bruyne coming off the bench – and Aguero sitting on it – they are back to almost full strength as they ease into the festive fixture list. That we barely even register the absence of David Silva is another indication that this side has transcended all other incarnations.

Over to you, Liverpool. This is going to be one hell of a title race.