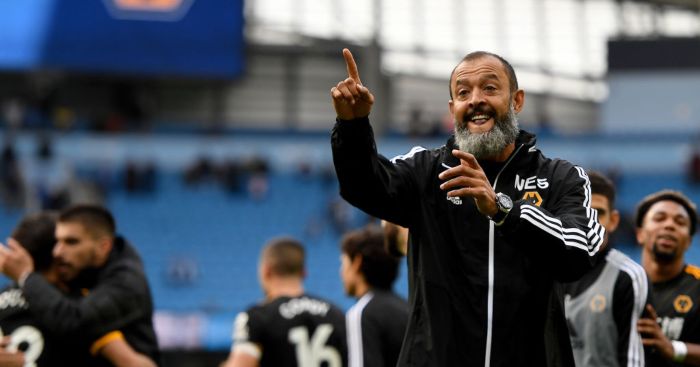 So much for Europa League football holding Wolves back, stretching their small squad and unsettling the solid, stable structure that Nuno Espirito Santo had set. This supposed distraction has helped them refocus and rediscover themselves.

That excuse could not have been dismissed more effectively than on Sunday. After travelling to and from Turkey on Thursday they returned with two full days to prepare for their journey to a Manchester City side that had beaten Dinamo Zagreb at home. The odds were stacked against them.

And it’s not as if Wolves had been able to take their foot off the pedal in midweek against Besiktas. An early lead would have given them an opportunity to conserve energy and maintain peak mental and physical fitness. Willy Boly’s stoppage-time winner meant that every sprint was required and every thought needed, albeit fully rewarded.

That Adama Traore repeated the feat to double their lead at the Etihad Stadium is testament to both their ability and resolve. This was no case of scoring one fortunate goal and holding on for dear life: it was a counter-attacking masterclass achieved through perfect synergy.

The performance before the goals was excellent. Wolves defended well with a high line and ferocious pressing. They were disciplined, diligent and forced City to play poorly by themselves playing so well.

That was enough for a draw, yet Nuno was not content. Traore moved from wing-back to centre-forward upon Patrick Cutrone’s removal in the 68th minute and exploited City’s blind spot. Coupled with the forcible change of Ryan Bennett for Roman Saiss before quarter of an hour had gone, the manager earned this victory.

The contrast was stark. City – and certainly Pep Guardiola – were poor. They looked bereft of ideas, blessed with possession but no knowledge of how it should be used. The substitutions either did not remedy the issues or were an attempt to do so far too late. They were shut down with startling ease, losing a Premier League game at home without scoring under this manager for the first time.

But this afternoon belongs to Wolves, who might be kind enough to let Liverpool have a share of the enjoyment. City are eight points behind the rampant leaders after as many games. Their conquerors, who took until the 18th minute of their seventh match to actually boast a lead this season, are somehow 11th.

Perhaps the Europa League did have an effect on them, at least to begin with. “We have to grow and improve when we are on the field, we don’t have time to on the training ground,” he said last month. “We are recovering and playing so you have to do other things to improve your performance. This is a new thing for a lot of the players.

“You have to be ready to train after you play because you have a game two days after,” he added. “It’s very tough. Big teams do it, we are doing this now and we want to embrace it.”

It certainly looked that way here. If Wolves struggled to balance the plates at first, they are doing a smashing job now. They drew three and lost two league games before the Europa League group stage commenced; they have drawn one and won two since.

The challenge, while at first overbearing, has been accepted. With less time to prepare comes a greater need for clarity and unity. Nuno is as transparent and precise as they come, and his players more committed to this cause than most.

Nine days ago, Wolves looked a little lost. Someone just needed to give them enough Europa to hang their hopes on. A season has finally – surely – turned.