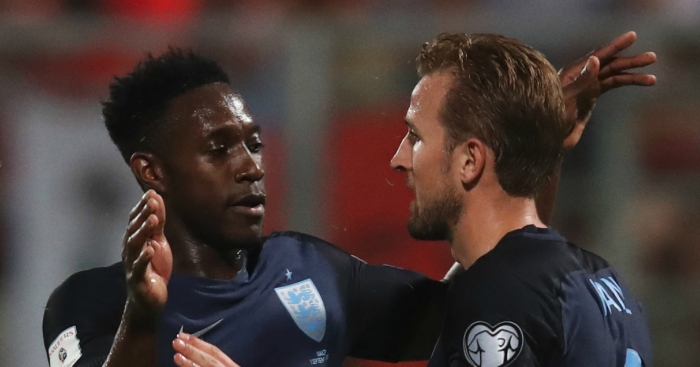 As ever, this represents our estimation of Gareth Southgate’s thoughts. Any player badly injured is not included. Sorry Chambo, Winkso and Gomezo…

1 (1) Harry Kane
No. 1 on our list of top ten strikers of the season. And as Daniel Storey wrote: ‘If you can score 37 times in the Premier League and Champions League and people are still asking questions, it says something about your usual high standards. Now can we please wrap him in cotton wool, arrange for round-the-clock massages and ban him from practising corners between now and mid-June?’

3 (3) Raheem Sterling
Only three English players have scored more Premier League goals since Euro 2016, a tournament that damn near broke him. As Daniel Storey wrote here – in a list in which Sterling was only beaten by Mo Salah: ‘All that is left is for Sterling to shine in Russia, sticking two fingers up at those who told him he would fail in that task. Actually, he seems a shy lad. Leave that to us, Raheem.’

4 (5) Jamie Vardy
Why write your own stuff when you can just quote Storey?: ‘If 20 league goals is another superb achievement, the key features to his success are consistently scoring against the best defences in the country and a ridiculous efficiency in front of goal. Of all 73 players to take 40 or more shots in the Premier League this season, Vardy ranks first. He is almost 5% clear of the nearest striker.’ We repeat what we have said before: We would start him against Belgium.

5 (6) Eric Dier
It’s difficult to shift the suspicion that he will be the player who makes the mistake that sees England exit the tournament. And yet he is England’s best defensive midfielder. Which pretty much sums up England in 2018.

6 (11) Jordan Henderson
He is less than two weeks away from the possibility of lifting the Champions League trophy; as odd as that sounds, he has been truly excellent at the business end of Liverpool’s pretty impressive season. Having Salah, Roberto Firmino and Sadio Mane ahead of him has forced him to change his natural safety-first approach; he looks for the early pass forward and we will need that in Russia.

7 (4) John Stones
As I wrote in March: ‘So he still scares the sh*t out of us sometimes, but he has started England’s last six games so Southgate clearly intends to build his defence around Stones, and particularly his partnership with Walker.’

8 (7) Jesse Lingard
Appears to be ahead of Dele Alli in Gareth Southgate’s thinking as the most advanced of the central midfielders – he started against both Netherlands and Italy – but we have just noticed that he has scored one Premier League goal since New Year’s Day.

9 (8) Dele Alli
And here is the man with five Premier League goals in the same time frame. And yet no England goals since October 2016. We really are just hoping that some impractical magic happens in June.

11 (9) Marcus Rashford
I wrote in March: ‘He goes to Russia as England’s third-choice striker rather than first-choice wide forward. Suddenly England’s bench is starting to look real sexy.’ Eight of his 14 appearances under Southgate have indeed come from the bench.

12 (13) Kieran Trippier
The good news is that he has recovered from the knee injury that kept him out of Tottenham’s final game of the season. The better news – for Trippier, at least – is that Kyle Walker goes as a centre-half, so he is not just guaranteed a squad place but also probably a starting spot. And yet we are still not convinced.

13 (15) Phil Jones
“Not just this season but there was a long period in the middle of last season where I think he has been the best defender,” said Southgate earlier this season. He is a confirmed fan and he reiterated it in March; Jones will go.

14 (12) Jack Butland
England’s second-choice goalkeeper will be looking for a club to leapfrog him beyond Pickford this summer.

15 (16) Ashley Young
Versatile, experienced and playing regularly for a top-six club. These are all prized and unusual assets in this current England set-up. As Southgate said in March: “I saw him against Liverpool against Salah the other day and he was fantastic. In that wing-back role someone like Ashley, who has played further forward, gives us a different profile.”

16 (27) Gary Cahill
I wrote in March that ‘The problem is that he no longer starting for Chelsea. And at 32 (and just one position in his skill set), he doesn’t get the same pass as Joe Gomez.’ But in May, Cahill is starting for Chelsea and Gomez is crocked. He goes.

17 (18) Danny Rose
‘How beloved he is when he’s right and today there were signs of it,’ said one leading Spurs site of his performance against Leicester at the weekend. The first big call of the ladder and we think he just about shades it over Ryan Bertrand, who bizarrely has more England caps.

18 (14) Adam Lallana
I said he ‘must somehow now play enough minutes for Liverpool to unrust’ at the end of March’; he has since played just 21 Premier League minutes of football. And yet we still think Southgate will consider him worth the risk. For reasons why, just look at the options below.

21 (22) Jack Wilshere
Another massive risk and we are not entirely convinced. I wrote in March:  ‘It certainly means that he pretty much has to play the rest of the season with no interruptions. Prove that you are not made of balsa wood, Jack. Please.’ That hasn’t happened, but the choice between a 70% Wilshere and a 100% Jake Livermore is no choice at all.

22 (25) Ruben Loftus-Cheek
“If it was me selecting the squad today, would I find a place for him in the squad? I would,” said Roy Hodgson. And we believe – in the absence of Alex Oxlade-Chamberlain – that Southgate will too.

24 (24) Ryan Bertrand
It feels harsh as only five players – Kyle Walker, Marcus Rashford, Eric Dier, John Stones and Joe Hart – have played more under Southgate than Bertrand and yet it feels like he is a stand-by (your) man waiting to happen.

25 (NE) Trent Alexander-Arnold
Southgate has surprised us with his boldness, but do we think he is going to take a player without a single call-up? Not quite.

27 (19) Joe Hart
I mean, he has been truly shite, but we had assumed that Southgate would stick with Hart even if it’s just to organise the darts. But with Cahill back on the scene, that senior ‘been here and failed before, but at least knows where to sit at lunch’ place can be taken by the Chelsea man. It’s all over.

28 (26) James Tarkowski
Excellent against Italy but it may have come a little too late for the Burnley man to make the plane. Still, if you had told him at the start of the season that he would even merit a mention…

29 (34) Ryan Sessegnon
See No. 25. We would wildly celebrate his inclusion but it feels like a glorious pipe dream.

34 (36) Chris Smalling
“While I’m playing under Jose and he’s happy and I’m playing regularly, then I’m happy with that,” he said in November. Well he is playing under Jose and he’s happy and he’s playing regularly. Southgate has surely said too much (“We want to play in a certain way and the players I have brought in I want to see using the ball from the back and building it up in a certain way”) to go back now.

35 (NE) Jadon Sancho
Another possible wildcard; the kid is 18 and he has started Borussia Dortmund’s last four league games. Is the Bundesliga doing English football a favour?

36 (RE) Jonjo Shelvey
According to the Daily Mirror, ‘Southgate has not even got the 26-year-old playmaker under consideration because of worries about his disciplinary record, his temperament and whether he would be a good tourist – as they could be away for more than a month.’

Listen, if England are away for more than a month, Shelvey can basically do what the f*** he wants.

37 (42) Jack Cork
Played four minutes for England and touched the ball 11 times. And that might be the end of that.

39 (39) Nathaniel Clyne
This was not the season to get actually, properly injured.

40 (NE) Ademola Lookman
Four goals in his last five league games for RB Leipzig. Kane and Vardy are the only Englishmen to score more top-flight goals in April/May.