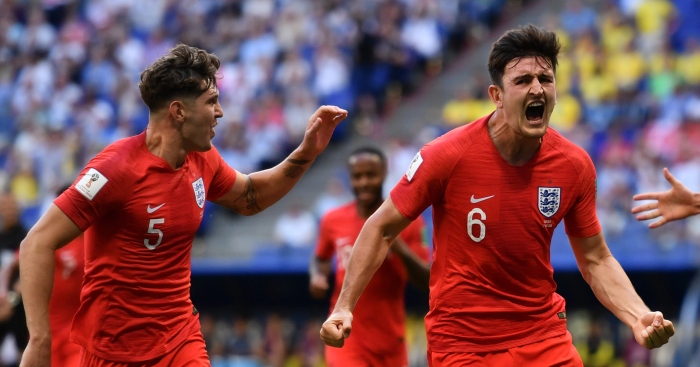 As ever, this represents our estimation of Gareth Southgate’s thoughts.  And we feel like we know him well. Numbers in brackets pertain to this ladder from prior to the squad announcement.

1 (1) Harry Kane
Not atop this list because he won the Golden Boot, but because England really do not have any other options. No other player would have completed 120 minutes against Croatia with the same lack of mobility, but Gareth Southgate was – understandably – afraid that substituting Kane would instantaneously a) destroy any goal threat and b) make him the next Graham Taylor.

2 (10) Jordan Pickford
‘Everton’s player of the year and England’s No. 1. We think’ is what we said only two months ago. Now we know.

3 (7) John Stones
Very much central to Gareth Southgate’s plans. And very much worth him making an exception to keep him in the England side even after Pep Guardiola pushed him aside. Remarkably, he is still only 24. Wonderfully, he has largely avoided censure for the lapse of concentration that led to Croatia’s winner.

4 (19) Harry Maguire
Are you old enough to remember a Radio 1 DJ reading out the top 40 and making a fuss about the ‘highest climbers’? Well, here is Harry Maguire, who won hearts and minds at the World Cup by being so very much better than his appearance would suggest. He is 25.

5 (2) Kyle Walker
The old man of that Made in Yorkshire back three at the grand old age of 28. We expect his defensive prowess may wane the second he loses his extraordinary pace, but we don’t expect that to happen too significantly in the next two years, especially as those two years will be spent under the tutelage of Pep Guardiola.

6 (12) Kieran Trippier
We are not afraid to admit that we were rather less than convinced about Trippier as a right wing-back before this tournament began, but he has been a revelation. He created 22 chances in Russia; the next man on the list – after a pretty massive blank space – is Raheem Sterling with seven.

7 (8) Jesse Lingard
Created four chances in 468 minutes (fewer than Harry Maguire) so we really would like somebody a little more creative to emerge between now and 2020, but there’s no doubt that Lingard’s energy and lightness of touch make him a Southgate favourite.

8 (3) Raheem Sterling
One shot on target in six games playing as a striker? Not good enough. If six of your ten shots are blocked, you are making poor decisions. And this comes from people who love you and really appreciate every other thing you do. But we would really quite like another actual striker to push themselves forward in the next two years, please.

9 (RE) Alex Oxlade-Chamberlain
Having started England’s two March friendlies, it is clear that Southgate initially conceived England’s 3-5-2 with Oxlade-Chamberlain in mind as one of the two midfield attackers beyond Jordan Henderson. He is certainly a better fit than the out-of-sorts Dele Alli.

10 (6) Jordan Henderson
Dropping down the list despite an excellent tournament may seem a tad harsh, but Henderson will be 30 by the time 2020 comes around. We expect him to stay in the picture, but he will have to work hard to remain in the Liverpool team as they evolve over the next two years.

11 (9) Dele Alli
Created three chances in 334 minutes (fewer than Harry Maguire) of a pretty underwhelming tournament. Something is not quite right with Dele Alli for England and Southgate will be desperately hoping he is not an automatic pick in 2020 if that remains the case.

12 (22) Ruben Loftus-Cheek
We would be tempted to put him higher up this list if we had a clue where/if he will be playing football next season.

13 (5) Eric Dier
Marginalised in Russia as the Henderson v Dier debate was decided with a landslide in favour of the Liverpool man. When you play less football than Fabian Delph, you know something has gone slightly awry.

14 (29) Ryan Sessegnon
The first left-back on the list has never played for England and indeed never played in the Premier League. He is just 18. But with Fulham’s promotion comes Sessegnon’s – in with a bullet at No. 14. Sorry, Danny.

15 (25) Trent Alexander-Arnold
For England and Trent’s sake, we really bloody hope he is in Jurgen Klopp’s plans for this season. Still just 19 and ludicrously talented.

16 (11) Marcus Rashford
So very much depends on Jose Mourinho giving Rashford minutes, because he did little in Russia to advance his own cause. The good news is that he is still only 20 and time is on his side.

17 (17) Danny Rose
Picked ahead of Ryan Bertrand but could find himself playing understudy to Sessegnon over the next two years. Or at least until Luke Shaw starts playing actual football somewhere.

18 (31) Lewis Cook
On Southgate’s World Cup stand-by list and very much a part of England’s future even before he captained the Under-21s to a third successive Toulon victory. He is pretty much the only member of that squad guaranteed Premier League football next season.

20 (45) Nat Chalobah
The one thing we know with absolute certainty in this mixed-up world is that Gareth Southgate loves Nat Chalobah.

21 (RE) Joe Gomez
If he plays for Liverpool, he will be in Southgate’s plans as Gary Cahill and Phil Jones step aside. And quite possibly fall over.

22 (NE) Angus Gunn
When you get transferred to a Premier League club for an eight-figure sum as a 22-year-old goalkeeper, you really ought to be in the England manager’s plans.

24 (26) Fabian Delph
Just about young enough to retain some hope. Just about versatile enough to keep around.

25 (13) Phil Jones
“He’s a very good player and a good age – and he can be a part of what we want to do,” said Southgate after a tournament that only really served to expose Jones’ failings. But just a few months after naming him as England’s best defender, Southgate will not be for discarding.

26 (28) James Tarkowski
Excellent against Italy in March, earning himself a place in the stand-by squad, but he will hope for further chances in this new England side.

27 (21) Jack Wilshere
Because a fit Jack Wilshere playing for a half-decent West Ham side has a fighting chance. And my, did we miss his ilk in Russia.

28 (16) Gary Cahill
Not quite discarded but very much placed on the ‘ICE’ pile along with Ashley Young, who we really must remember to include on this ladder somewhere.

29 (35) Jadon Sancho
One of the four England youngsters name-checked by Southgate in May as being “six months away” from an England call-up. And we know he will play some football at Borussia Dortmund.

31 (18) Adam Lallana
Already 30 and you wonder how much football he could possibly play for Liverpool now they have added Naby Keita and Fabinho to their ranks.

33 (NE) Mason Mount
Invited to train with England’s squad before the World Cup and surely in line for a call-up if he is playing top-flight football at Vitesse or elsewhere.

Please be playing top-flight football at Vitesse or elsewhere.

34 (49) Luke Shaw
Manchester United are not buying another left-back this summer so there is half a chance. Surely.

35 (24) Ryan Bertrand
You may be shocked to learn he has 19 England caps without ever really carrying an air of permanence.

36 (39) Nathaniel Clyne
Admit it, you bloody forgot he existed, didn’t you? Remember when Walker v Clyne was a thing?

37 (38) Jamaal Lascelles
Climbing. Ever so slowly.

38 (32) Dominic Solanke
Our kingdom for a striker.

39 (NE) James Maddison
The most expensive transfer of the summer is currently a shoo-in for the Uncapped English XI we meant to write when he signed.