It's been another sh*t show of a season from West Ham. No wonder they wanted it voided. 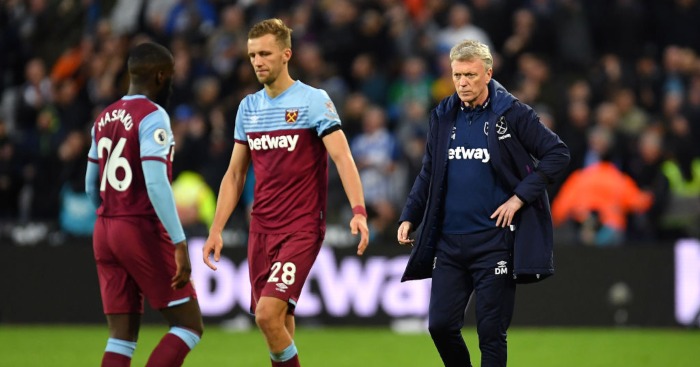 It’s been another sh*t show of a season from West Ham. No wonder they wanted it voided…

Best player: Angelo Ogbonna
A bit ‘tallest dwarf’ this one but the Italian has been the glue that has almost held together the Hammers’ defence this season. While Issa Diop has suffered second-season syndrome along with pretty much everyone who joined in 2018, Ogbonna has been a rock. Or at least as much of a rock as anybody can possibly be when the storms are a-ragin’ all around.

He was dropped by Manuel Pellegrini for the clash against Leicester City that ultimately cost the Chilean his job but then immediately recalled by David Moyes, who remembered the sterling work he had done in the trenches in 2018. He has not missed a minute since as West Ham not-quite lifted themselves out of trouble.

Ogbonna Hammer of the Year so far.

Biggest disappointment: Manuel Lanzini
A serious knee injury has seen the best of the Argentine lost in the treatment room, but fans could not forgive the strong stench of cannot-be-arsedness emanating from the 27-year-old this season. He has not scored a single goal and the last of his two assists came in 2019 when Pellegrini was still at the helm.

Even David Moyes, who said this in January – “My thought is he is arguably one of our best players, if not our best player. When I was here before I needed him as much as I needed Marko Arnautovic. He was such a good player for us and I am desperate to get him back to the levels he was at. I trust him, I believe he can get back to those levels. At the moment he is our flair, he is our person that might makes the difference. There is nobody more behind him than me” – then dropped him in February.

He does have a great view though.

Whatever you think of Lanzini’s performances this must be a difficult time for players like him.

Locked down in a foreign country, away from family & friends. Even more detached from the “real” world.

After all of this is over all players start with a clean slate in my eyes⚒️. https://t.co/NZ3obk0gC7

Best performance: Chelsea 0-1 West Ham
A run of seven games without victory was the backdrop to West Ham’s visit to Chelsea, where they expected the customary shellacking. Instead, they got a first Stamford Bridge victory in 17 years, David Martin in tears and a cushion to the relegation zone.

Your man Ogbonna was phenomenal that day along with Fabian Balbuena and between them they repelled everything thrown at them by Chelsea after Aaron Cresswell’s strike.

Obviously this is West Ham so they then lost back-to-back games and their manager was sacked a month later, but still.

So happy to make my premier league debut. The lads in front of me were terrific and the @WestHam fans were so loud, you really drove us on to get an important 3 points. #COYI⚒ pic.twitter.com/g2rtP998bW

Worst performance: West Ham 0-1 West Brom
So many options but the home FA Cup defeat to the Baggies was a particular low point. They played a strong side (though crucially, Ogbonna was on the bench for the first, rotten half) but pretty much to a man, they were terrible. Carlos Sanchez? Awful? Lanzini? Rotten. Albian Ajeti? Rank.

Moyes made three half-time substitutions and said: “We passed the ball away, we kicked it out the pitch, we couldn’t play, we never really had any attacks. We gave up too many opportunities, I felt, to West Brom in the first half.”

They drew the second half 0-0 so well done, Hammers.

Biggest VAR moment: The lost equaliser
It wasn’t handball as we know it but Declan Rice was adjudged to have handled the ball in the area as Robert Snodgrass was celebrating the goal he thought he had scored against Sheffield United.

“That is the rule now. The handball rule is an absolute joke,” said Jamie Carragher on Sky Sports. “There is no way goals like that should not be given in football. It’s embarrassing that it’s not a goal. Nobody knows what is going on.

“There is no intention there whatsoever. He (Rice) is shaking his head and rightly so. It’s a joke this handball rule.”

Dick move: Karren Brady’s voidness
“There is no dodging the possibility that all levels in the EFL, as well as the Premier League, will have to be cancelled and this season declared null and void because if the players can’t play the games can’t go ahead,” said Brady. Now she was not the last to suggest that we might all have to pretend that 19/20 never happened but only she said it – from the position of a relegation battle – just a matter of days after football was postponed. Have some decorum, Karren.

Not sure why Karren Brady is in favour of declaring the season null and void … hmmm https://t.co/OT28aGFJaB pic.twitter.com/Iy9d2a1gx8

Did their recruitment work?
There are tentative half-ticks next to the names of Pablo Fornals and Sebastien Haller – and the promise of more to come from Jarred Bowen – though so very much more was expected from both for a total of almost £70m. But the rest? Pretty much a sh*t-show. The Hammers’ best players of the season – Robert Snodgrass, Ogbonna, Mikhail Antonio – are all old-stagers that West Ham have tried really hard to replace.

Manager’s job security:
He’s on an 18-month contract so there doesn’t seem to be an awful lot of job security. He is clearly not the manager they really want or they wouldn’t have kicked his arse out of the door less than two years ago. There is the option of an extension and the Scot was typically bullish.

“I think it says a lot about the owners, they thought the job I did was good enough to give me another opportunity,” said Moyes. “This time I’m going to make it so there’s no choice but to renew. There’s a clause in there and I’m going to make it impossible to ignore that, that’s my plan.”

Well we all have plans (actually we don’t; not anymore).

What they need in the summer:
Mostly another striker, though Alexis Sanchez would be a rotten idea. Beyond that, more centre-half cover, quality at full-back and maybe a handful of players with proven Premier League quality for a start.