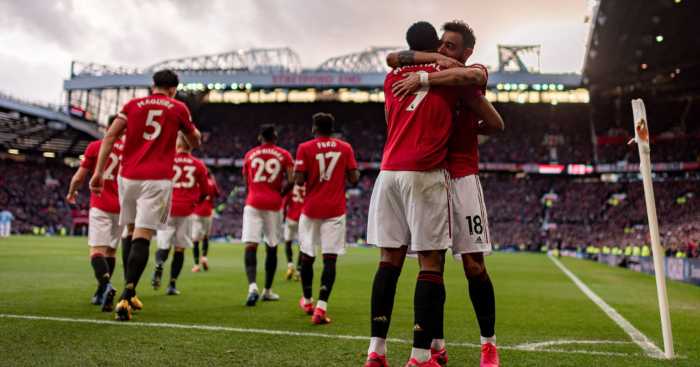 Best player: Bruno Fernandes
The January signing hasn’t yet started 10 games in a United shirt and yet he has to go down as their player of the season. Which says pretty much everything.

Since Fernandes’ debut in mid-February, United have not lost. Ole Gunnar Solskjaer’s side, which previously suffered from a hopeless lack of imagination, has scored 22 goals and conceded just twice.

Fernandes’ presence is no coincidence. He has lifted a previously listless squad, seemingly inspiring his new team-mates to strive towards his standards. No signing in the post-Sir Alex Ferguson era has made such a tangible impact. Certainly not so immediately.

Equally as impressive as his creativity and technique has been his mentality. Where Red Devils would shrug their shoulders before, Fernandes is issuing bollockings for mis-placed passes or the failure to spot his runs. He is also pulling players into position, and was offering advice from his very first training session, apparently. Had United signed him when they should have last summer, they would surely be sat in the top four rather than now fretting over whether they have been cut down prematurely in their prime.

Biggest disappointment: Paul Pogba
Everything Fernandes has done in the last six weeks, Pogba should have been doing for the last three-and-a-half years. Now the new boy has given United’s record signing a problem.

Whereas before while Pogba was sat on the sidelines, unable or unwilling – possibly both – to help his struggling side, he sat there safe in the knowledge that he was insulated somewhat from United’s woes. Despite his utter disregard for the club that pays his enormous wages, there remained a core of supporters and pundits – Graeme Souness isn’t one – who felt United still needed the France midfielder and he was not to blame for the club’s failure to tease some consistent form from their most talented player. It was either the fault of Jose Mourinho, Solskjaer or his team-mates. Anyone but Pogba.

To the more cynical among us, his plan appeared painfully transparent: let United flail around before coming back for the last eight-to-ten games of the season in time to do just enough to prove himself fit for Euro 2020 and flutter his eyelashes at Real Madrid or Juventus, who would reciprocate by chucking £100million at United’s problem. Then, finally, he would get the move he has craved for two years.

Plan P, though, has been scuppered by a virus – how ironic – and Fernandes showing up his dismal attitude and output. The chances now of Real or Juve finding the sums required for a player who hasn’t started a Premier League game since September seem remote at best, unless they sweeten the deal with a player or two they would prefer not to lose themselves.

That being the case, maybe Pogba will be back in a United shirt next season. If so, he best not have a face like a slapped arse if he has any intention of rebuilding the bridges torched by himself and his agent.

Best Performance: Manchester United 2-0 Manchester City
You could pick either of United’s two derby victories in the Premier League this season. Pep Guardiola appeared to be caught off guard when they picked City off at the Etihad in December but given the Old Trafford clash was their fourth meeting of the campaign, Pep Guardiola cannot claim that he did not know what was coming.

One difference between the first three derbies and this one was the presence of Fernandes. It was his vision and technique which set up Anthony Martial for the opening goal which United deserved. Their second was gifted to them by Ederson but a two-goal cushion hardly flattered the hosts.

The Red Devils out-shot City 12 to seven despite having only 28% possession. The scenes at the end were a far cry from those just a month and a half before…

Worst performance: Manchester United 0-2 Burnley
Three seasons in a row Burnley had gone 2-0 up at Old Trafford, but on this occasion, they held on for their first win at United since 1962. Not that they were were made to hang on.

Trailing to Chris Wood’s opener, United were booed off at half-time and jeered through the second half after Jay Rodriguez doubled the Clarets’ lead. Coming a few days after being soundly beaten at Liverpool, when Solskjaer was happy just to be in the game until the last kick, home supporters deserted Old Trafford in their droves long before the final whistle, by which time United had 72% possession and 24 shots, but seemingly no hope.

“We hold our hands up, it is not good enough,” said Solskjaer after the game. Rio Ferdinand went further, describing it is an ’embarrassment’. Luckily for the manager, that result appears to have been the nadir. And if Woodward was having second thoughts about splurging on Fernandes, this performance gave him no room to squirm out of signing the Portugal star.

Biggest VAR moment:
United have done pretty well this season from VAR’s introduction. Only Brighton can match the number of decisions overturned in their favour.

VAR certainly dug United out of a hole at Chelsea in February. The Red Devils were 1-0 up when Kurt Zouma netted an equaliser that was chalked off because of the most minor of infringements on Brandon Williams. After Maguire had doubled United’s lead – the United captain could have been sent off for kicking Michy Batshuayi in the balls –  Olivier Giroud came off the bench to bail Chelsea out, and it was only VAR which spotted that he was offside by an immaculately-coiffured hair’s breadth.

Not that United didn’t deserve the victory.

Olivier Giroud was offside by thissssss much as he thought he pulled a goal back. VAR strikes again against Chelsea. #CFC 0-2 #MUFC #CHEMUN pic.twitter.com/RRERTcGcD4

Did their recruitment work?
For a club with no discernible recruitment structure in place, it has worked unfathomably well.

United spent big last summer, even though they fell short of achieving all they should have in the market. But they turned a wreck of a defence into one of the Premier League’s best with the signings of Maguire and Aaron Wan-Bissaka; they kept nine clean sheets in 11 matches prior to the shutdown. Dan James has had a hugely encouraging maiden season in the Premier League since the expectation was that he would initially be a squad player, rather than one who has started 25 of United’s 28 games so far.

United really needed a centre-forward last summer and they went desperately close to missing another deadline in January. The signing of Odion Ighalo was widely scoffed at, but as panic signings go, the Nigeria striker has been very effective so far.

Then there is Fernandes. Again, United should really have got a deal done with Sporting Lisbon last summer, but they certainly were not alone in doubting his credentials despite some ridiculous numbers in the Portuguese league. Even in January, United looked set to walk away, which as we know now, would have been a travesty.

Manager’s job security:
Solskjaer is sitting a lot more comfortably in his hot-seat compared to a couple of months ago, pre-Fernandes, when Liverpool and Burnley each embarrassed United within four days of each other. Given the chance to end the season there and then, many United fans would have taken it. But now, Solskjaer seems to have regained a grip on the wheel and steered United back on to the right road where weeks ago, they were hurtling towards the cliff edge.

Mauricio Pochettino’s availability will continue to cast a shadow over Solskjaer’s work until the former Spurs boss is given gainful employment elsewhere. But Woodward, presumably bored of firing managers, has been at pains to support Solskjaer and United’s recent form has given him the justification to maintain that stance through the summer.

What they need in the summer:
They still need to remedy last summer’s failure to buy a centre-forward. Ighalo is hoping he’s done enough in eight games to earn a permanent move but United really need a top class No.9. Harry Kane, anyone?

They badly want Jadon Sancho but beyond the Borussia Dortmund winger, much depends on how Solskjaer wants to play, and whether he sees Fernandes playing off the front or deeper. Another central midfielder, one capable of screening the defence while supplying the United’s attacking talents, would also be ideal since injuries this term have highlighted how vulnerable Solskjaer’s midfield could be without added depth.

Unlike last summer, when United just needed as much quality as they could get their hands on, there is a blend to be found between their recruitment and how to get the best out of the talent already on the books.