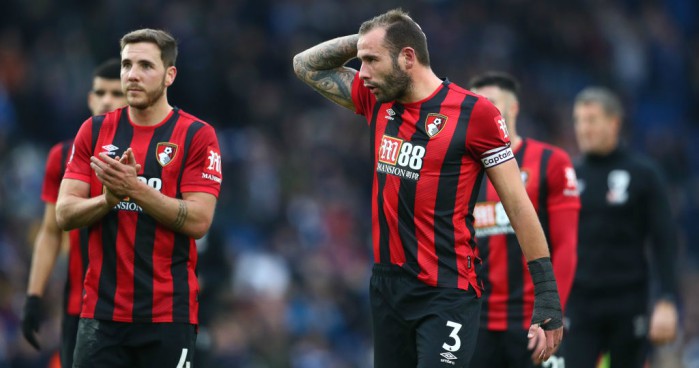 Best player: Aaron Ramsdale
It was a ballsy move on Eddie Howe’s part to promote Ramsdale from nowhere – apologies to AFC Wimbledon – to the No.1 spot at the start of the season. But without the 21-year-old between the sticks, the season could have been even bleaker for Bournemouth.

Ramsdale spent the second half of last season on loan in League One and though he earned the Dons’ Young Player of the Season award, in was assumed that another loan spell on the next rung of the ladder would be forthcoming. But Howe, unable to trust Asmir Begovic and reluctant to turn back to Artur Boruc, chucked the former Sheffield United stopper straight in at the deep end.

Ramsdale’s performances have helped keep Bournemouth afloat when they threatened to be pulled under in the battle to escape the drop. Only Martin Dubravka has faced more shots than the Premier League’s youngest No.1 and only two keepers have made more saves than the 103 Ramsdale has accumulated. From being “nowhere near the team” 18 months ago, Ramsdale might be the Cherries’ most valuable asset should they eventually be relegated, with Spurs and Chelsea both said to be sniffing around.

Aaron Ramsdale is just getting started in the Premier League. 👊 #GKUnionpic.twitter.com/44UswkKgbP

Biggest disappointment: Ryan Fraser
Bournemouth’s front three were being compared to Liverpool’s terrific trio last season, and with good reason. Fraser was on fire; Callum Wilson was establishing himself as an England international; and Josh King was also attracting interest from the big boys. This term, however, it has been a different story, for Fraser in particular.

The Scotland winger was comfortably the Premier League’s most creative force last season. Fraser laid on 28 big chances for his team-mates last term, 10 ahead of second-place Eden Hazard, who earned himself a move to Real Madrid.

Skipper Simon Francis thought it was a mistake to admit being distracted – “wee man sometimes gets a bit carried away in interviews, says things that he probably shouldn’t do, maybe keep under wraps” – but the feeling was “completely natural”.

The numbers speak for themselves anyway. So far this season, he has laid on five big chances – 44 players have created more. It is unlikely he will be short of offers as a free agent this summer but it seems his suitors now mostly belong to the Premier League’s middle tier. But first, should the season ever re-start, the 26-year-old has to rediscover some of his old swagger to keep Bournemouth in the top flight.

Best performance: Chelsea 0-1 Bournemouth
It might not have been their purist display of football this season but it was the most resilient and most satisfying of a season during which Bournemouth have folded far too often.

Dan Gosling’s 84th-minute goal, his first of the season on his first start, gave the Cherries their first away win of the campaign after a run of five straight defeats in which they conceded 11 goals.

It came at a time when injuries were starting to bite and Howe was forced to select a midfield comprised entirely of central players. But the Cherries kept Chelsea at bay despite allowing their hosts two-thirds of the possession, while scoring with one of only two shots on target.

It was seen as something to build upon. Then Bournemouth went another six without victory…

Worst performance: Crystal Palace 1-0 Bournemouth
On this miserable occasion, their previous visit to London before going to Chelsea, it was Bournemouth who endured 69 per cent of the possession, with Howe’s men making 578 passes compared to Palace’s 258. But they were still out-shot seven to six by a Palace side who played with 10 men for 71 minutes.

It was a depleted Palace team too, one with a makeshift back four which still denied the toothless Cherries a single big chance in the game.

“The feeling coming off is the probably the lowest I’ve ever been as Bournemouth manager,” said Howe on a night even Ramsdale did himself no favours.

Biggest VAR Moment: From 1-1 to 0-2 at Burnley
For Bournemouth, the positive and negative experiences of VAR have generally evened themselves out this season. The high was undoubtedly Gosling’s late winner at Chelsea being allowed to stand. The low point undoubtedly came at Burnley….

First, Burnley had a first-half opener ruled out because the ball touched Philip Billing’s shoulder somewhere in the process, but if that was a kick in the teeth, a two-footer in the balls came on the hour.

Bournemouth broke with the kind of incision and pace not seen too often from the Cherries this term, with Harry Wilson finishing off a perfectly-executed counter-attack to even things up. Until Stockley Park got involved. VAR judged that Adam Smith began the counter by controlling the ball with his arm in his own box. Instead of being level, Bournemouth found themselves 2-0 down after Jay Rodriguez scored the resulting penalty.

“I don’t think we dealt with the emotions of that very well,” said Howe. “The players are human beings and I have to understand how they felt in that moment. I think we were psychologically spent.”

Did their recruitment work?
Bournemouth spent around £50million on four permanent signings last summer. Lloyd Kelly is yet to kick a ball in the Premier League, while Arnaut Danjuma has also struggled with injuries, with the winger yet to be involved in a goal from four starts and five substitute appearances. Perhaps they were signed with the future in mind but Howe could really have used a more immediate impact.

Howe has got more from Billing, who has been inconsistent but recently more impressive in a role which allows him to get forward more. Jack Stacey was a £4million signing from Luton who has had to be used more often than Howe might originally have thought, thanks to the injuries which have shaped Bournemouth’s season.

The Cherries also plucked Harry Wilson from the loan market but the Liverpool midfielder has struggled to build upon a very bright start. Wilson has scored six Premier League goals – he remains their second-highest scorer – but none since November and he is yet to provide an assist.

To answer the question: Probably not, no.

Dick move: Steve Cook’s ‘save’ at Norwich
The trip to fellow drop-zone dwellers Norwich came with Bournemouth flailing after one win in their previous 12 Premier League matches. You can imagine Howe urging his beleaguered side to keep it simple: ‘Nothing stupid, lads.’ So it would have been infuriating for the manager to see one of his most experienced players suffer an explosive brain fart at the most inopportune time.

With half an hour gone, Norwich’s Ondrej Duda fired a shot towards a gaping goal which would have been a blow, but going behind was hardly an insurmountable challenge for the Bournemouth with so long left to play. Steve Cook did not weigh that up. Seeing an opportunity to intervene, the defender make an impressive save to divert the ball on to the post but one which saw him dismissed for deliberate handball and the visitors reduced to 10 men. If Cook was gambling on Teemu Pukki missing the penalty, it did not pay off.

Bournemouth toiled for the remaining hour but Norwich controlled the game with their numerical advantage. After the game, Todd Cantwell admitted Cook had made the Canaries’ job far simpler: “It was a bit of a strange decision from him. I am not sure what brought that on. We are thankful for that as it made it much easier to control the game with less pressure.”

Seb Stafford-Bloor wrote about the perception of Howe midway through the season and the relative lack of scrutiny the Bournemouth manager has faced since bringing the club to the Premier League. Their modest ground, with 10,000 fewer seats than any other Premier League stadium, means that survival is seen as a miracle each time it is achieved, but that is not to say Howe hasn’t been lavished with funds when he’s needed them.

Bournemouth won’t sack Howe, we know that for sure, especially when he can point to their crippling injury list as mitigation for whatever happens over the coming months. When he goes, if he ever does, it will most likely be on his terms. If there is nothing more tempting than the security he enjoys at Dean Court, then he will surely remain, whether Bournemouth survive or not.

What they need this summer:
To know where they will begin next season. They currently sit third from bottom, in the relegation zone on goal difference. Bournemouth are potentially one win from 15th, or a Villa victory in their game in hand away from 19th.

At least the hiatus gives the Cherries time to formulate two plans. The first, to implement upon survival, will require replacements for free agent Fraser and on-loan Harry Wilson. That’s before Howe considers how to add the necessary quality to a squad which has struggled this season.

Relegation will make that almost impossible. As well as Fraser and Harry Wilson, Bournemouth will also have to consider the demand for and desires of Ramsdale, Nathan Ake, Billing – “No chance am I getting two relegations in a row,” he said in January – Callum Wilson and King.

Either way, it promises to be a pivotal summer for the Cherries.